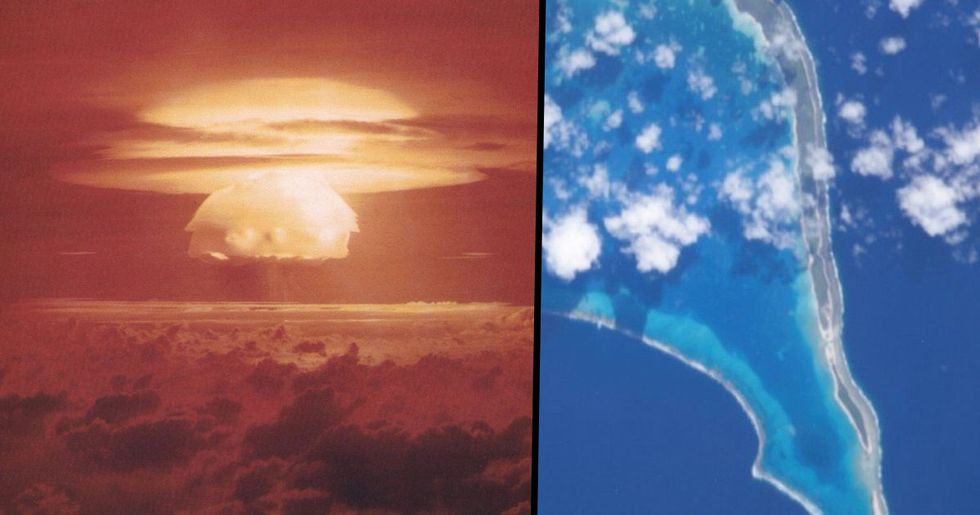 There's nothing quite as terrifying as nuclear radiation.

Since the events of WW2 and the use of nuclear bombs on enemy countries, the effects of these highly radioactive weapons have been made very much apparent.

Not only have entire civilizations been destroyed by nuclear weapons, but millions of people have been killed, and those who have survived have lived with agonizing chronic illnesses.

Nuclear damage is sadly still a big issue today, and beautiful parts of the world are suffering greatly from its effects. Keep scrolling to learn more about the devastating effects left upon the tropical regions of our planet...

Where does nuclear waste come from?

Nuclear waste is pretty much the remains of any radioactive material. This waste can be mostly found at nuclear power stations, or in areas that have been affected by radiation, such as bomb sites.

The first atomic bombs to ever be used were a part of the Manhattan Project, which involved the United States dropping bombs on Hiroshima and Nagasaki in Japan during WW2. Nearly 200,000 people died collectively in Japan from these bombings, and it was clear to the scientists who developed the bombs that an explosion that large was certainly not anticipated.

The size of the nuclear explosion was staggering.

The bomb, which was nicknamed "Little Boy," wiped out thousands of civilians and the majority of the city instantly from the moment it exploded. Despite the city of Hiroshima no longer being radioactive, thousands of generations were affected by the radiation, which caused deformities and genetic illnesses such as cancer.

Many other parts of the world have since been affected by radiation.

The most famous incident was the Chernobyl disaster, which was a nuclear accident at a power plant near the city of Pripyat, Ukraine. A safety test was being run on a nuclear reactor and, due to a member of staff failing to follow procedure, a nuclear reaction was set off, resulting in a surge of nuclear energy and numerous explosions.

Many in the area were affected.

Twenty-eight people who worked at the plant died from the explosions, and many died in the following months from radiation-related illnesses. Chernobyl is known to still have high radiation levels to this day, and it has been estimated that the area won't be safe for humans to live in for the next 20,000 years.

The grotesque horrors of Chernobyl have been documented worldwide.

The recent HBO docudrama, Chernobyl, has tried to highlight the horrors of the aftermath, which demonstrated how those in close proximity to the power plant died agonizing deaths - within days, their blood vessels began hemorrhaging and their skin began to melt off their bodies. Cancer, miscarriages, and birth defects skyrocketed after the disaster. It was an absolutely horrific turn of events for the people of Ukraine.

Fukushima, a city in Japan, was affected by a similar nuclear accident in a power plant, which was spurred along by a tsunami that followed an earthquake. It was the most significant nuclear disaster since Chernobyl.

It has been reported that 573 deaths in Fukushima following the disaster were nuclear and radiation-related, even though nobody died initially from the accident.

Despite Fukushima not being as radioactive as Chernobyl...

It still had horrific and long-lasting effects on residents, which, again, demonstrates the terrifying powers of radioactive waste.

There are many other parts of the world with similar radiation levels...

And the majority are the places that one would least expect.

The Marshall Islands appear to be a tropical paradise...

They are found in the central Pacific Ocean and they look like an idyllic set of islands with stunning white beaches and crystal clear waters.

They are located between Hawaii and Australia.

They consist of volcanic islands and coral atolls and provide the most stunning sceneries. So why on Earth aren't they the ideal vacation destinations?

Here is exactly why...

These groups of beautiful islands have been discovered to contain deadly levels of radiation, most of which is 1000 times higher than the levels at Chernobyl, and nuclear power station in Fukushima.

The islands suffered severe bombing between 1946-1958.

The United States used the islands to carry out numerous nuclear bombing tests - sixty, to be precise.

What about the locals of the Marshall Islands?

The poor locals were forced to flee their homes in preparation for the bomb tests, and their homes were ultimately destroyed in the process.

Kind of makes you lose faith in humanity, doesn't it?

The Bikini and Enewetak atolls of the islands have suffered the most.

According to research published this week by Columbia University, the Bikini and Enewetak atolls suffered so much that they still contain extremely high amounts of radiation to this very day.

Bikini was hit with a hydrogen-bomb that is still, to this day, the largest of its kind. It caused complete devastation to the island, and research found that "the radiation levels from this island were up to fifteen to 1000 times higher than those of Chernobyl and Fukushima."

The majority of people fled the region.

But it is reported that around 50,000 people still live there.

The residents were oblivious to the effects that they were soon to feel.

Some residents believed that the falling residue from the explosion was snow, and many ran outside to play under it.

The long-lasting effects of the radiation were horrific.

Soon after the exposure, people on the islands began to suffer from hair loss, burns, nausea, and many forms of cancer. The 2 most common causes of death of people on these islands are diabetes and cancer as a result of high levels of plutonium.

A dome was installed after testing.

Once the testing was finally over, the US government installed a dome on the island of Runit to collect and contain any nuclear waste. But these toxic substances have begun to leak out of the dome and contaminate the water.

According to the Daily Mail, researchers said: "The presence of radioactive isotopes on the Runit Island is a real concern, and residents should be warned against any use of the island."

"Some locals have already complained about birth defects and high cancer rates, despite the US' agreement with the Republic of the Marshall Islands that it was safe for people to live there," the researchers continued.

Will anything ever be done about this crisis?

It's absolutely sickening that the locals of these islands have just been left to live their lives surrounded by this deadly radiation. One can only hope that the US government will at least be able to compensate for the lives lost and for those who have suffered for years at the hands of nuclear testing.