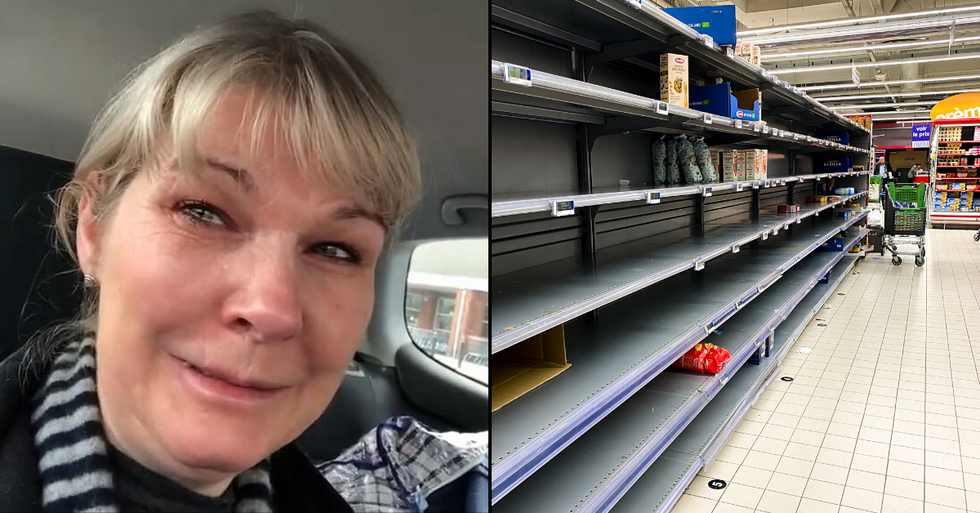 During this nightmare COVOD-19 pandemic, people have been either left without work or completely swamped with overtime... and workers in health care are certainly feeling the strain.

But a heartbreaking video clip has gone viral recently of a nurse, who has just completed a forty-eight-hour shift, in tears after there was nothing for her to buy at the grocery store.

The world is facing very turbulent times, at the moment.

And common symptoms include fever, coughing, shortness of breath, and breathing difficulties. But for patients who are elderly and have existing health issues, the virus can lead to pneumonia, severe acute respiratory syndrome, kidney failure, and even death.

More than 200,000 people all over the world have now been infected with the virus...

Because, fast forward 3 months, and nearly every major country in the world has been infected by the virus, with some of the worst affected being Japan, South Korea, Russia, Italy, the United Kingdom, Iran, and Spain.

Since the first COVID-19 patient in Washington, there have been 14,366 more confirmed cases across the country and 217 deaths.

In numerous different parts of the world, grocery stores have been completely emptied.

For some bizarre reason, people have been feeling the need to extremely stockpile their groceries and essentials... almost as if they are preparing for an apocalypse.

Governments have been urging residents to not stockpile excessively.

But people have not been listening and this unnecessary stockpiling has been effecting the vulnerable and people who can't access their local supermarkets as easily.

People who work in healthcare have been severely affected by this.

Nurses and doctors all around the world have been working inhumane hours to keep on top of the pandemic and these poor people are physically and emotionally exhausted.

And one nurse from the U.K. has perfectly outlined these strains.

Dawn Bilbrough, who is fifty-one, is from York in the U.K. and she works as a critical care nurse.

And in an emotional video, she tearfully explained her current situation thanks to people excessively stockpiling their groceries.

The nurse was clearly on the brink of tears...

"I'm a critical care nurse and I've just finished 48 hours of work and I just wanted to get some stuff in for the next 48 hours," she explained.

"There's no fruit, there are no vegetables and I just don't know how I'm supposed to stay healthy."

She hit hard on some home truths...

"Those people who are just stripping the shelves have basic foods you just need to stop it because it's people like me that are going to be looking after you when you are at your lowest and just stop it please!"

After sharing the video, Dawn was flooded with messages of support.

One person wrote, "Oh Dawn, I'm so sorry to see you so upset. The job you are doing is so very important to so many people, and how unfair it is that this means you are last in line for the nutritious food you really need to stay healthy and keep doing that important job. Thinking of you and sending much love.xxx"

People have been offering help to the overworked nurse...

Elsewhere another person offered the nurse some of their own groceries, telling her, "Dawn bless you, please don’t cry! I’m in isolation but I have a bag of potatoes, carrots and a watermelon you can have."

Critical care nurse Dawn has pleaded for the public to "stop it" after being faced with empty supermarket shelves f… https://t.co/jeFNF1cHt1
— BBC Yorkshire (@BBC Yorkshire)1584637965.0

If this doesn't make people realize how selfish they're being by emptying their supermarkets of their groceries, we really don't know what will. We need to be looking after each other, including those who are having to work inhumane hours and care for others... it is of the utmost importance.