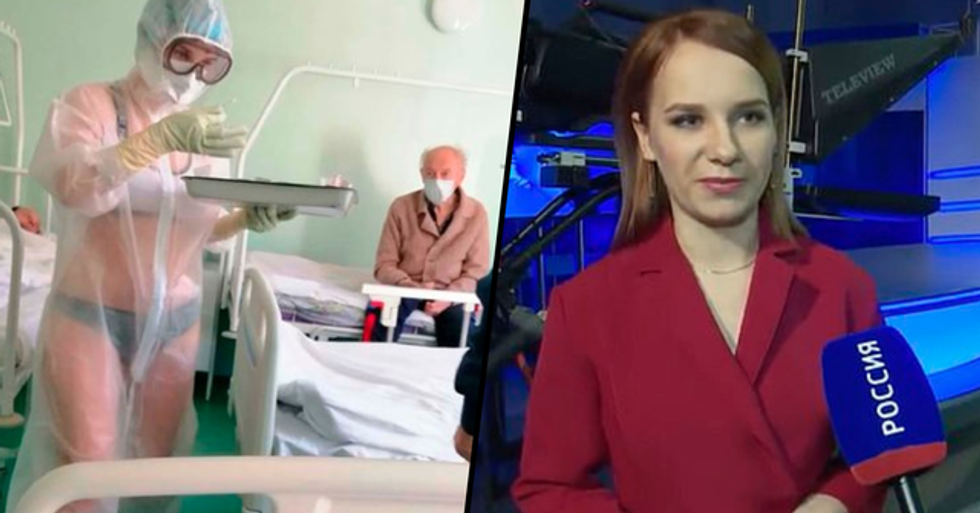 Since going viral earlier this year, the nurse who was punished for wearing "lingerie" under her see-through PPE has had her life completely transformed from the mishap...

Who remembers the story of the Russian nurse who was disciplined for wearing "lingerie" under her PPE?

Back in May, during the peak of the coronavirus pandemic, a Russian nurse gained viral fame for wearing nothing but "lingerie" under her protective PPE while treating patients.

Now, the term "lingerie" needs to be used very lightly...

The "revealing" photograph snapped by a patient in the city of Tula quickly went viral, but not everyone could see the problem.

The nurse, whose name was later revealed to be Nadia Zhukova, was given incredibly see-through PPE to wear...

And, as for the "lingerie"?

Well, I don't know what these people consider as lingerie, but what I saw was quite the opposite.

However, the people in charge of the hospital were not impressed by her clothing...

@MailOnline The elderly patient in the background doesn’t seem to be offended. Probably the best thing that happened to him all day.
— Twin Ravens (@Twin Ravens)1589976012.0

And, subsequently, Nadia was punished for "non-compliance with the requirements for medical clothing."

But she had her own reasons for her choices.

Apparently, she told her managers at Tula Regional Clinical Hospital that she did not realize just how transparent the gown was and because it was "too hot", she wore a "swimsuit" under it to combat the intense layering, not lingerie. It's a legitimate reason.

Nadia admitted that she was "shocked" when her friends showed her the photos...

And she was upset about the hurtful comments made about her pictures. "My colleagues supported me and I thank them very much for this," she said. "If it hadn't been for them, I don't know how I would have dealt with it all."

And, most importantly, it turns out that the patients on the ward had no problem with it.

One man said there was "some embarrassment" but no one had a real issue with it - She was still doing her job, after all.

A local newspaper even went on to commend her, noting:

"At least someone has a sense of humor in this gloomy, gloomy reality."

Here's the photograph that caused all the fuss...

Nurse disciplined for wearing lingerie beneath transparent PPE when she got too hot https://t.co/TnIYigCIZK https://t.co/NKrS1lOX7O
— Daily Mirror (@Daily Mirror)1589969333.0

It's hardly "lingerie" is it?

Anyway, it later emerged that Nadia was suspended from her position...

But as the saying goes - every cloud has a silver lining.

Nadia was eventually given back her job after people voiced their disapproval of her suspension...

And she also landed herself a modeling contract.

The public's voice was heard...

As per The Sun, a source said: "She was originally rapped by hospital bosses 'non-compliance with the requirements for medical clothing.' The nurse complained she was 'too hot' in the hazmat gown – and her punishment was withdrawn after a furious backlash from the public against her being disciplined."

She has high ambitions...

"Now she is not only keeping her job, but she is also posing as a model for a Russian sports clothes line while also announcing that she plans to study to become a doctor. Pictures show her wearing ZASPORT sports clothes, a brand founded by the daughter of a top FSB security service official."

Translated to English, it said: "Doctors deserve respect and support. Everyone knows the story that happened to me, but I never strove to become famous, I have different guidelines in life. I want the doctors to be respected, to appreciate our work, not only in the current situation. It is a great honor for me to work with the @zasport brand, which cooperates with world champions, with Olympic champions, and which pays great attention to the social direction. I want to be useful in this and hopefully, I will get."

But now, Nadia has set her sights upon a whole new career path entirely.

It has emerged this week that the nurse has now become a weather-presenter for a popular Russian news station.

Yeah, none of us saw this one coming...

But, remarkably, she will continue working towards qualifying as a doctor on the side.

Nadia is determined to not let her new career venture get in the way of her dreams of one day becoming a doctor.

"I want to continue my studies and become a doctor," she explained. "I am not afraid to get infected."

But, regardless, she is very excited for the next chapter in her life.

Of her new TV role on Vesti Tula, she said: "It is a big thing for me. Thank you for letting me try."

However, not all nurses have benefited so much from the coronavirus pandemic. Keep scrolling to read about the tragic story of a nurse in Florida who was found dead after struggling through the pandemic...