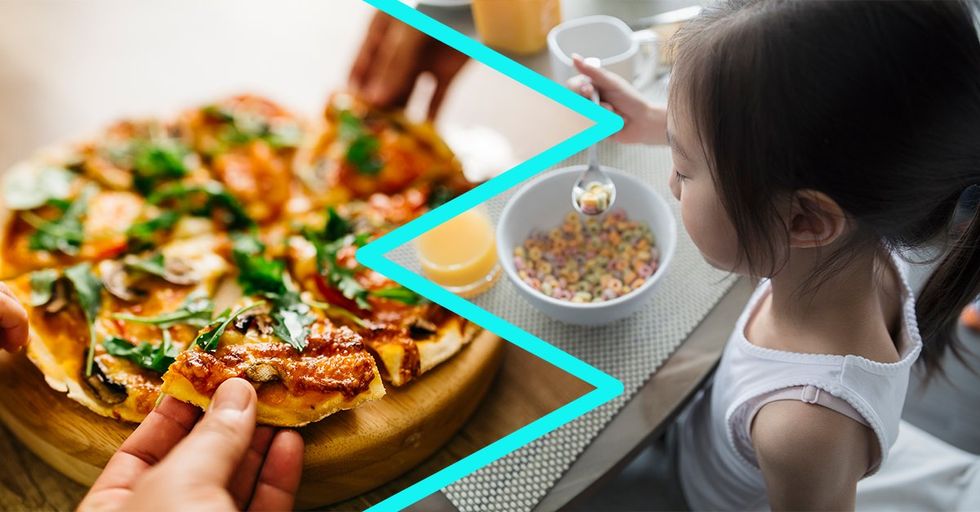 Nutritionists Now Say Pizza for Breakfast Is Healthier Than Most Cereals

Nutritionist Chelsea Amer tells The Daily Meal that in many cases, a slice of pizza is healthier than your average bowl of cereal for breakfast. While things like portion size and ingredients matter, pizza's protein and carbs provide more nutrition than cereal's sugary and empty calories.

Not only is pizza more nutritional than most cereals, it keeps you fuller for longer. While Amer doesn't necessarily recommend pizza for breakfast, she can't deny that it's a healthy alternative compared to most cereals.

It's Never Too Early for A Slice

This breakthrough revelation is a guilt-ridding gamechanger that's sure to ease the consciences of people from all walks of life. Late-night bingers, hangover-nursers, and even exhausted moms can all find comfort in this nutritional newsbreak, knowing that it's really never too early for a slice of pizza.

Dietician Claims that Pizza is Healthier for Breakfast than Most Cereals

The Chicago Tribune reports that Chelsey Amer, a registered dietician, recently told The Daily Meal that an average slice of pizza is actually healthier for breakfast than a bowl of most cereals with whole milk.

You may be surprised to find out that an average slice of pizza and a bowl of cereal with whole milk contain nearly the same amount of calories... However, pizza packs a much larger protein punch, which will keep you full and boost satiety throughout the morning.

Skip the Sugar Crash and Just Order the Pie

While, of course, facts like serving size and the types of pizza and cereal count when comparing the two foods nutritionally. But in general, many kinds of cereal are loaded with empty calories and a ton of sugar, while most slices of pizza, while they may be greasy, are nonetheless packed with protein, keeping you fuller for longer.

When it comes to Cereal, Size Matters

The empty calories and loads of sugar found in many popular cereal brands tend to leave breakfast-eaters unsatisfied and more likely to exceed the recommended serving size. Instead of overcompensating, you might as well load up on protein and carbs with a slice or two and make it to lunchtime without hunger pangs.

The Daily Meal wanted to make sure they weren't serving their readers an extra large serving of B.S.,  so they put Amer's claim to the test in a small study. The study consisted of 124 subjects and showed that up to 92% were consuming more than their cereal's suggested serving size.

Even Healthy Cereal-Eaters Could Benefit From A Slice Instead

And when taking a look at their healthier cereal consumers, well, let's just say they didn't skip breakfast. Those who chose granola as their cereal of choice poured a whopping 282% more cereal than the suggested serving.

All Good Things in Moderation

While pizza can be a healthier choice per se, you may be giving most people an open window here of really amping up sodium, carbohydrates and fat early in the morning and setting oneself up for failure throughout the day.

Okay, we get it. So we shouldn't indulge in cheesy goodness for breakfast 7 days a week... but who's really counting?

While Pizza May is not the Ideal Breakfast, It's Not THAT Bad

While Amer warns that pizza is not necessarily the ideal nutritional breakfast food, it's also not as bad as we might have previously thought. Sometimes, there are even vegetables involved. And cereal can't compete with that.

Don't Throw All Your Cereal Boxes Out Just Yet

If you're not ready to say goodbye to your morning cheerios, don't fret. You can still enjoy a bowl of cereal each morning. Just choose a brand that's low in sugar and watch the portions. Also, try using fat-free or 2% milk instead of whole. If this just sounds like too much work, just hit speed dial and start your day right. Extra cheese, please.