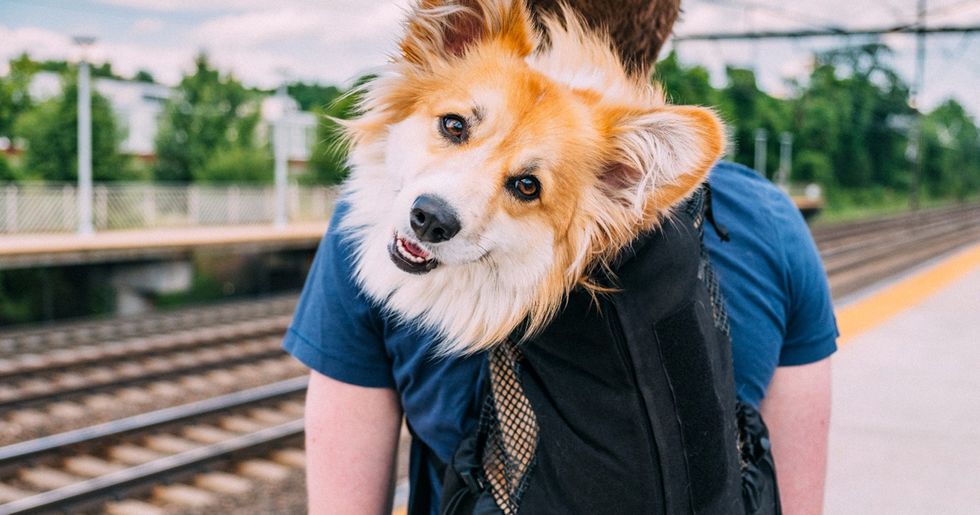 NYC Banned Dogs on the Subway Unless They Fit In Bags, So Owners Got Creative

New York City and its residents all revolve around the subway system. Even when its conditions are less than ideal, it’s still the primary mode of transportation for the bustling city. It's cheaper, easier, and sometimes quicker than taking a taxi or car share ride.

So when the NYC subway implemented a rule forbidding dogs that could not fit in a passenger’s bag, pet owners didn’t take it lying down. However, instead of disregarding the new rule, New Yorkers followed it to the letter. Luckily for them, the NYC subway didn’t specify how small the bag – or the dog – actually had to be in order for it to be allowed on the subway. So, take a look. Here are some cute pooches squished into some very appropriate sized bags.

This is the subway.

With over 400 stations across the city, it’s the busiest rapid transit system in the United States.

It can get pretty crowded.

The NYC subway is the leading form of transportation in the bustling city, and it sees over a billion riders per year.

And sure, it tends to get a little dirty.

With consistent service for so many passengers, it’s understandable that the subway may not always be squeaky clean.

What’s not so understandable? Why the subway apparently hates fun.

According to the dog ban, “No person may bring any animal on or into any conveyance or facility unless enclosed in a container."

But that was no problem for the subway passengers of NYC.

Despite the subway’s clear attempt to keep larger dogs off the trains, the law’s vague language created a loophole for creative riders.

Some pups easily met the requirement.

Others had to get a little more creative.

This seems impossible until you remember that dogs are capable of miracles.

Honestly, there doesn’t seem to be a problem with any of these good boys and girls.

Every dog is on its best behavior, because why wouldn’t it be?

Some did seem to be using magic to bend the rules.

I mean, how else do you explain something like this?

While others just did the bare minimum.

Not sure this really counts, but who would snitch on a dog?

When people started posting their creative solutions to the subway’s new rule, the Internet was immediately obsessed.

Who knew those IKEA bags would be so useful?

The various dog-to-bag ratios were all perfect in their own way.

Sticking it to the man has never been so cute.

People were ready to do the absolute most.

I learned in NYC dogs have to fit in bags to ride the subway. Annnnnd doggy bags have a whole new meaning for me no… https://t.co/sAft8YeWda
— Stephanie Patrick (@Stephanie Patrick)1501620912.0

Only the best for a precious fur baby.

Others prepared to defend their dogs with legalese.

@annalecta More fine-print: "Paragraph (1) of this subdivision does not apply to despondent dogs poking out of suit… https://t.co/KhmpZGsWTA
— Jacob Gershman (@Jacob Gershman)1496838683.0

It’s important to read the fine print – lawyers can be real dogs.

The photos sparked a #dogsinbags movement.

Apparently dogs are only allowed on New York subway if fit in a bag. So @Tedbear_dog is practising just in case. Le… https://t.co/mHakAVcSwr
— John Nichol (@John Nichol)1496829586.0

Something about seeing a dog in a bag just makes it, like, 10x cuter.

Fine, this is just an excuse to show you more dogs in bags.

But just look at this one! It’s basically a swaddled newborn.

Let’s play, “Find The Dog in This Picture."

If you guessed “in the bag," you’re right!

Yup, nothing will top this.

Are either of these dogs technically in a bag? No. Do I care? Also no.

The NYC subway isn’t the only transportation system laying down the law against beloved pets.

Delta recently announced that they were no longer allowing “pit bull type" service dogs to travel on board.

The airline claims the new rule is in place as a safety precaution after several employees were bitten.

However, banning a particular breed from traveling with passengers is not compliant with the American Disabilities Act.

The policy also limits Delta flyers to one emotional support animal per trip.

Many felt the rule unfairly targeted pitbulls, and are publicly boycotting the airline in protest.

Service animals can offer incomparable support to those in need.

Flying can exacerbate the anxieties service animals are intended to prevent, and many Pitbulls provide valuable support.

I mean, who wouldn’t want to see this on an airplane?

Pretty hard to be scared of flying when you’re petting an outrageously cute dog.

Yes I do feel emotionally supported thank you so much.

Things are always easier with your best friend by your side.

I can honestly feel the love from here.

So New Yorkers, please keep bringing your dogs on the subway.

No matter what size they are.

To the NYC subway, sorry not sorry.

Your ban may have failed, but at least you created some pretty unforgettable #dogsinbags photos.