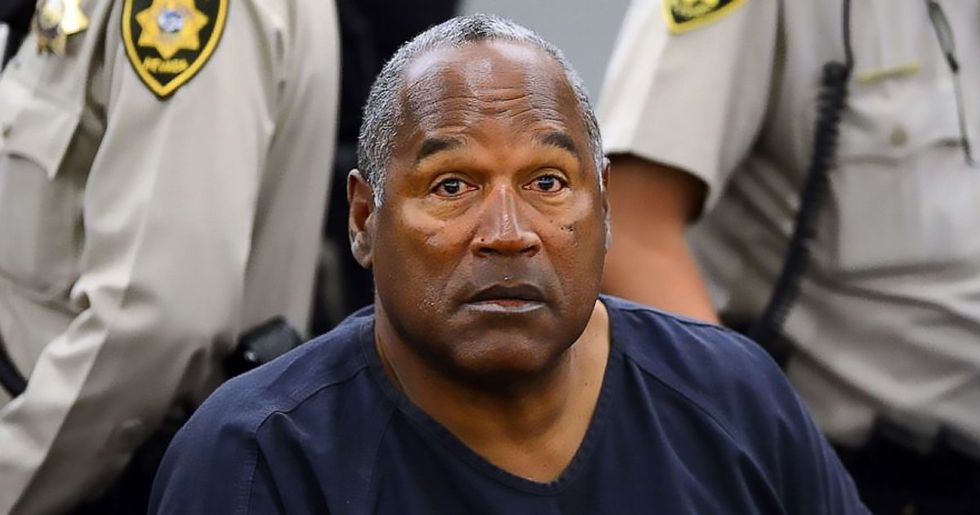 O.J. Simpson's Newest Threats Could Send Him Back to Jail

The '90s were a fascinating time for celebrities — regular people were getting famous for committing bizarre crimes, and the American public was absolutely obsessed. Think about Lorena Bobbitt, who cut off her husband's penis, or Tonya Harding, who hired a hitman to take out her skating rival Nancy Kerrigan's knee.

But the king of bonkers '90s celebrity criminals was O.J. Simpson. In 1994, Simpson was arrested for the murder of Nicole Brown, his ex-wife, and Ron Goldman, Nicole's friend. The ensuing trial was all anyone could talk about in the '90s, dominating TV coverage and tabloid covers.

Of course, O.J. Simpson would famously be acquitted of the murders, walking free in October of 1995. But that doesn't mean his life has been sunshine and lollipops since.

O.J. Simpson is currently out on parole, but his dealings with a Twitter parody account pretending to be him are now threatening to send him back to jail.

O.J. Simpson's life has been a circus since he was drafted into the NFL.

O.J. Simpson was an incredible running back coming out of USC, and was taken first overall by the Buffalo Bills in 1969. And while this is practically unheard of in today's NFL, he stayed with the team that picked him for eight years, almost his entire playing career.

A Hall of Fame NFL career would have been enough!

Instead, there was the infamous trial.

On June 12th, 1994, Nicole Brown Simpson and Ron Goldman were stabbed to death in Simpson's Brentwood home. After a Ford Bronco chase, O.J. Simpson was eventually arrested for the crime.

O.J. was found Not Guilty.

But the jury of his peers decided there was enough reasonable doubt to say he didn't do it. And it's hard to blame them — the bloody glove found at the scene did not fit, ergo they had to acquit.

It is absolutely the thing O.J. will forever be most famous for.

The O.J. Simpson trial was maybe the most publicized event in American history. Keep that in mind as you keep reading, because in a bit you're going to hear what O.J. is up to these days. It will blow your mind what he thinks the public remembers him for.

O.J. was defended at trial by his friend Robert Kardashian.

As depicted by former Friend David Schwimmer on FX's The People Vs. O.J. Simpson, Robert Kardashian was a member of O.J.'s legal "dream team." He's also the dad of the Kardashians we all know and love from the E! Network.

And since practically everyone's noticed that Khloe Kardashian looks nothing like her sisters...

Looking at this gif, I do not think Khloe and Kim are sisters. I could maybe believe them as niece and the aunt who is always living with them off and on because she keeps getting divorced, though.

The longstanding rumor has been that Khloe is actually O.J.'s daughter.

There are Kardashian theorists who believe O.J. Simpson had an affair with Kris Jenner and that he, not Robert Kardashian, is Khloe's father. And I hope that's not the case. You know how in Star Wars, it feels like everyone is part of the Skywalker family, and it makes the Star Wars universe feel really small? Like the only people in it are Skywalkers? I hope that, if Khloe does have a different dad, he's not at all famous. Otherwise, the Kardashian universe will feel really small.

Of course, even if she were to one day take a DNA test and it said she had a different father, Khloe Kardashian would still consider Robert Kardashian to be her father.

But O.J. has since shot down that rumor.

O.J. Simpson took the time to address the Robert Kardashian/ Khloe Kardashian/ Kris Jenner rumor on Twitter, and unequivocally say he's not Khloe's father. And, I don't know, that's easy to say, but I want to see O.J. take a DNA test... maybe even on Keeping Up With the Kardashians! (Wait, I take that back, I don't want to see that, I actually feel sick when I see O.J.)

You'd think that, after escaping the trial of the century by the skin of your teeth with a Not Guilty verdict, you'd just lay low for, I don't know, the rest of your life? But that's not O.J. Simpson.

O.J. was arrested for armed robbery and kidnapping in Las Vegas.

You were hoping he got into building houses for needy families, weren't you? Nah, O.J. Simpson got on the wrong side of the law again in 2007, when he and a group of men broke into the hotel room of a man who sold sports memorabilia and held him at gunpoint. He was arrested and later found guilty of armed robbery exactly 13 years, to the goddamn day, after he was acquitted of the murders of Brown and Goldman.

According to The Guardian, one of the four commissioners in charge of granting Simpson parole said he voted the way he did because Simpson was at "low risk to re-offend." Because when you think of O.J. Simpson, the last thing you can imagine him doing is committing crimes.

Since then, O.J. made another huge mistake: joining Twitter.

Saying in his first tweet that he's "got a little gettin' even to do," O.J. Simpson joined Twitter with the handle @TheRealOJ32, just this week, presumably because he wasn't hearing enough political vitriol from his favorite comedians.

But O.J. doesn't really grasp how the internet works.

Not only do most professional athletes struggle with social media — most of them just retweet compliments with the "praise be" hands emoji — but O.J. Simpson is now 71 years old. He is not going to use Twitter correctly.

He seems to think people are interested in him for fantasy football advice.

But this is an egregiously bad use of Twitter. The guy not only tweets mostly videos of himself — Twitter is a platform for words, O.J. — but he only talks about fantasy football! There was absolutely a time when O.J. Simpson was most well-known for his football acumen, but that time ended on June 12th, 1994.

That's where @KillerOJSimpson comes in.

One of many O.J. Simpson parody accounts, @KillerOJSimpson tweets as a version of O.J. Simpson who is really feelin' his murderous self. This parody version of O.J. is just like, "yeah I murdered Nicole, and it's funny!" (Oh, I forgot to mention at the top but there are no heroes in this story.)

If you're a public figure, I can one hundred percent understand being upset by Twitter accounts that — even jokingly — claim to be you and then highlight your worst qualities. But this Twitter account? This Twitter account is trying to score free Crazy Bread from Little Ceasar's, which I think costs US $0.05.

@KillerOJSimpson posted this video showing off his DMs, and one of them came from the real O.J. himself. It read, “Delete this account or I will have my lawyer remove it for false misleading content I didn’t post."

Now, I'm no lawyer. In fact, I dropped out of law school faster than any other law student in the history of Harvard. It's true! They gave me a certificate! But I do believe that parody is covered by US law, so as long as @KillerOJSimpson is stating clearly in his Twitter bio, as he does, there's not a lot O.J. Simpson could legally do. (The key word there is "legally.")

After @KillerOJSimpson kindly explained the parody law to Simpson by saying, "welcome to Twitter bruh," O.J. responded, saying, “Like I said, delete this ‘Parody’ account as you call it or face serious consequences by me. I’ll find your a** one way or another so don’t mess with me. I got nothing to lose. Grow up."

This is where it starts to get scary. Accused murderer O.J. Simpson DMed @KillerOJSimpson again, saying, “You think I’m playing? Tired of all your bullsh*t. I WILL FIND YOUR A** AND CUT YOU — Don’t believe me? Just watch and see b*tch." You get that DM from anyone else in the world, and it's easy enough to write off. But from O.J. Simpson? That ish is haunting.

Finally, O.J. sent a message that is just, in context, horrible.

The New York Post got on the horn with law enforcement.

Because O.J. Simpson is on parole from the armed robbery in 2007, these Twitter threats could be a violation (assuming they're actually him, which is no guarantee on the internet but are coming from his verified account). The New York Post called the Nevada Department of Public Safety, and a spokeswoman said the Division “takes threats or acts of violence against public safety very seriously and is looking into the alleged complaints."

So, are these tweets enough to send O.J. back to jail?

I mean, they sure feel like a criminal act, right? If O.J.'s parole was granted on the fact that he was not likely to re-offend, how is it okay for him to say he's going to re-offend?

So this is where we're at, folks — O.J. Simpson is threatening random internet trolls with knife emojis.

Right now, @KillerOJSimpson is just tweeting about the O.J. DMs, making fun of O.J. for stepping up to a teeny tiny little Twitter account, and, strangely, getting endorsement deals. It's not clear as to whether or not they have a dog in the "O.J. going back to jail" fight or not.

And now we're left with the question: who follows O.J. Simpson on Twitter?

Now, I hate Twitter as much as everyone else in the world has since November 2016, but I can see still wading into the muck to check in on your favorite friends and comedians. Do people have some kind of emotional attachment to O.J. Simpson that's drawing them to him? He has 795,000 followers! What is happening?

And if you were wrongfully convicted of murder...

When you're on parole for a violent assault, your very freedom depends on people believing you are not capable of hurting others any more. And it's tough to make to believe that when you're the most famous accused murder in history.

... why would you ever even think to send a knife emoji?

Just delete that one from your phone, my guy! You could go to jail if you just mistype one time and send a text reading "ill pick up dinner *smiley face* *smiley face* *knife emoji*."