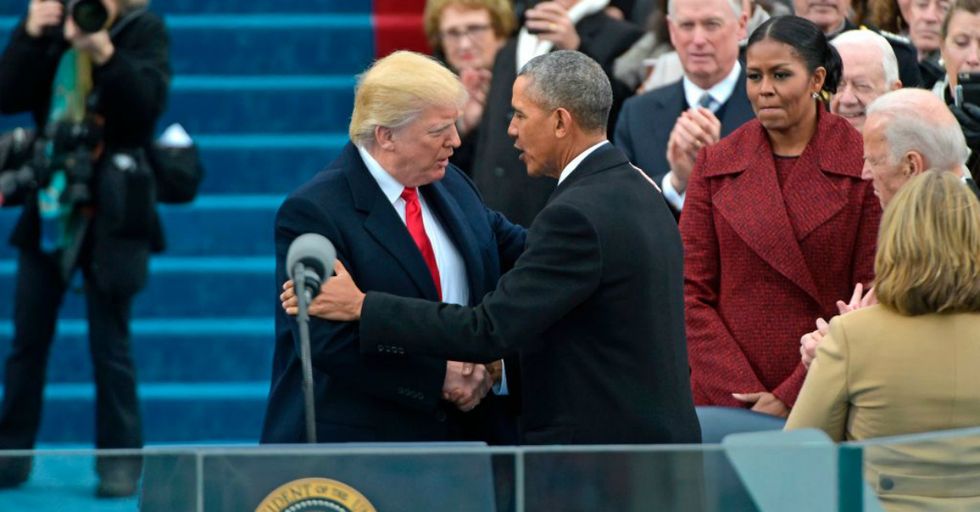 January 20, 2017. It was a big day for pretty much everyone in the country. Trump's inauguration brought with it strong emotions and reactions from both sides of the aisle. Most people have been pretty honest about how they felt on the day the Obamas left the White House and ushered in the Trumps. But one thing we haven't heard yet is how former President Barack Obama was actually feeling on that day — until now, that is.

The inauguration was obviously a huge day for all of us.

But it was even bigger for the four people at the very center of the thing: the Obamas and the Trumps. The Obamas were officially leaving the White House — their home for the past eight years. The Trumps, meanwhile, were just about to move in. And then there were the Clintons, who had lived in the White House before and were given the final evidence of the fact that they wouldn't be moving back in.

Because the Internet is the Internet, it managed to communicate through memes what these people were thinking.

A lot of us related hard to Michelle's amazing side-eye. There were also body language experts weighing in on Donald and Melania's odd behavior.

There was also all that hubbub about George W. Bush's poncho struggles.

Was he actually struggling with that poncho, or was he just trying to hide his tears? We may never know. Internet memes aside, we've found ourselves thinking often about how former President Barack Obama felt as he passed the baton onto Donald Trump. Luckily for us, he's finally spoken out about that day.

It was done as part of his interview with Prince Harry.

On Wednesday, December 27, the BBC aired Prince Harry's interview with Barack Obama. The two have been friends for years, so the Internet was obviously excited to finally hear the two of them bro out together.

Prince Harry started things off by asking the important questions:

Obama revealed that he hasn't seen White House Down OR Olympus Has Fallen, but he does miss the White House's movie theater. When asked to choose between boxers or briefs, the president demurred. He had no problem sharing his preference for Michael Jordan over LeBron James, though. "I'm a Chicago guy," he said. After the fun "This or That?" intro, Prince Harry got down to brass tacks and asked about the inauguration.

Obama revealed that his first thoughts were about his wife, former first lady Michelle Obama. "The first thing that went through my mind was sitting across from Michelle, how thankful I was that she had been my partner through that whole process." He continued talking about Michelle, saying, "She is [a] spectacular, funny, warm person. She is not someone who was naturally inclined to politics. So...she did this largely in support of my decision to run and for us to be able to come out of that intact, that our marriage was strong, we’re still each other’s best friends...You know, the sense that there was a completion and that we had done the work in a way that preserved our integrity and left us whole that we hadn’t fundamentally changed, I think was a satisfying feeling." Don't mind us. We're just over here crying a little bit.

Obama said that this feeling of satisfaction wasn't the only thing he was feeling, though.

"That was mixed with all the work that was still undone and concerns about how the country moves forward, but, you know, overall there was a serenity there. More than I would have expected."

The fact that Obama was able to feel a sense of serenity is pretty amazing and speaks volumes about his character.

We're glad that on one of the most intense days of the year, Obama was able to feel even a bit of peace as he passed the torch to Donald Trump. (And although he didn't say so in the interview, we have to imagine he was feeling maybe just a little proud of the memory of how many people had come to his own inauguration compared to Trump's. That he didn't mention it speaks to his character even more.)

People noticed something especially incredible about Obama's statement regarding the inauguration.

He managed to talk all about how he was feeling on the first day of Donald Trump's presidency — all without mentioning Donald Trump at all.

President Obama was and continues to be a true class act.

The fact that his main thoughts during the inauguration were about his relationship with his wife is pretty much our favorite thing to come out of the whole weird day. In fact, it might be pretty much the only good thing to have come out of that day.