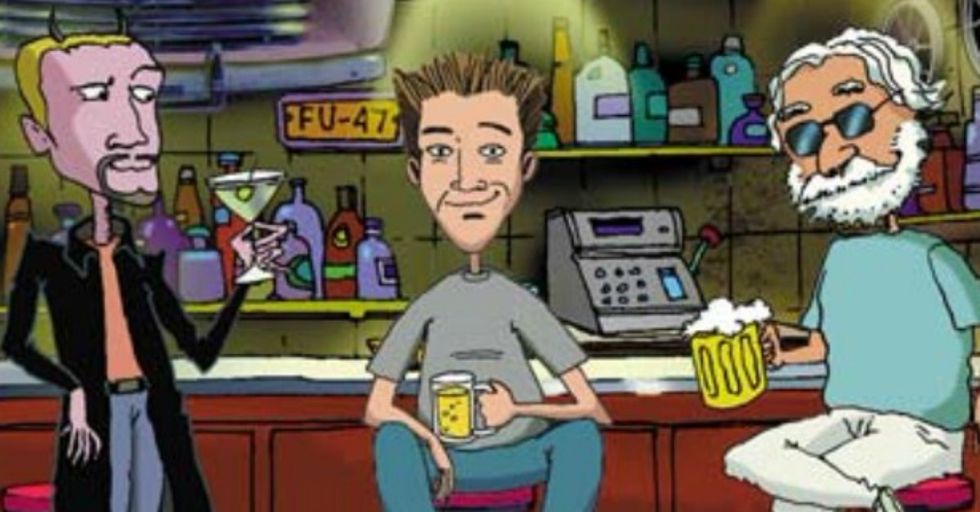 The 30 Most Underrated Cartoons of All Time

There's nothing quite like escaping reality and plunging yourself straight into an interesting animated cartoon land.

While most all of us might be familiar with classic cartoons like The Simpsons and Family Guy, there are also all sorts of lesser-known favorites out there, lurking in the shadows of our collective societal memory.

Lucky for you, we've taken that deep dive down for you, right into animated TV obscurity. Keep scrolling to satisfy your inner nerd. I'm tellin' ya...it feels oh so good.

Aired: 1995-1997, Kids' WB! Birthed during the great animation renaissance of the 1990s, and executive produced by Steven Spielberg no less, Freakazoid showcased the adventures of one zany, amped-up superhero and all his kooky super villain rivals. Maybe not as well-known as Animaniacs, but still a classic throwback in and of itself.

Aired: 1997-1999, ABC A cartoon version of the 1994 live-action comedy, Clerks, this obscure animated series was a seemingly surefire hit that didn't do all that hot. Only two episodes of the show ever aired. All six, count 'um six, were later released on DVD. Seems pretty on-brand for Clerks though, if I'm being honest.

Aired: 1994-1997, USA Network This surreal, black comedy centered on a private detective duck, voiced by none other than Seinfeld's Jason Alexander. Plus, this gem was animated by Klasky Csupo...famed animators of Rugrats, Aaahh!!! Real Monsters, and The Simpsons. Aka animation royalty! *Breathe, girl. Breathe out those raging fangirl vibes.*

Aired: 1995-1996, Kids' WB! Based on a surreal video game, Earthworm Jim is a wacky space adventure, filled with tales of protecting the universe from all sorts of absurdist catastrophes. I mean, there's a character named Psy-Crow. Who wouldn't be down for that?

Aired: 1998-2000, Comedy Central Bob and Margaret was a Canadian/English cartoon, profiling the everyday mid life crises of 40-something couple, Bob and Margaret Fish. They didn't have kids. They did have two pooches named William and Elizabeth. Sounds like a dream life to me.

Aired: 1967-1968, Fox This Hanna-Barbera classic was the very first animated TV series based on the Fantastic Four Marvel comics. Do you think they had any inkling as to the sheer magnitude of repeat remake tsunamis that choice was actually unleashing onto our subsequent summer blockbuster circuit? I think they did. I think they knew. *Shakes fist*

Aired: 2000, The WB Television Network; 2002, Adult Swim Released here and there on a few different networks, this Adult Swim animated series based on the famed comic strip takes place when Zoe is an infant rather than a toddler. So, if that's what you've been missing out on, go forth and scavenge for this golden ticket of a show.

via: Trope and Dagger

Aired: 1992-1995, Fox This half-animation and half-live muppet Jim Henson masterpiece chronicled dog detective, Ace Hart's antics. He moves in and out between animated and real life. In real life he converses with his muppet animator, Eliot Shag. This is world traversing on another level, and I'm all about it!

via: Den of Geek

Aired: 2005-Present, Fox This presently airing Fox animated series, created in part by Family Guy's Seth MacFarlane, hasn't found quite as hearty of fanbase as its creative brainchild brother sitcom, but the end is not nigh. Straddling the line between farce and observational comedy, this obscure gem is totally worth a watch.

Aired: 1998-2000, Kids' WB! Marketed primarily toward children, this highly educational animated series had a Saturday Night Live-light style feel. Guys. This show was my JAM. I'm nerdy and I know it.

Aired: 1999-2000, The WB; 2002, Adult Swim Mission Hill's got soul-searching twenty-somethings misadventuring in a quintessential "big city." I mean, when Just Shoot Me's Brian Posehn is gracing your cast, can you really ever go wrong?

Aired: 2009-Present, FX FX's animated spy comedy Archer is still airing strong. But also, the fact that he works for "International Secret Intelligence Service," aka ISIS, in the first few seasons? I feel like we don't have hardly enough memes yet about that connection.

Aired: 1994-1996, ABC; 1996-1997, syndicated; 1999-2001, Cartoon Network This Canadian sci-fi, adventure/action show was the first entirely computer-animated half hour tv series. It follows a Guardian trying to keep the Mainframe safe from viruses. So basically, it was the '90s version of me policing my dad's spam email opening tendencies? Cool cool.

Aired: 1993-1996, Nickelodeon Rocko, the Australian wallaby. Heffer, the gluttonous cow. Fillburt, the anxious turtle. Man, this show had it all.

via: Sabrina: The Animated Series Wiki

Aired: 1999-2001, ABC & Disney Channel Remember when the live action version of Sabrina, the Teenage Witch went off the air and we were all super sad? But then the animated version came around, the dreary clouds parted, and we could all finally breathe again? Just me? Alright. That Spooky Jar though, you guys! That. Spooky. Jar.

Aired: 2000, Cartoon Network; 2001-2005, Adult Swim This Cartoon Network and then Adult Swim show was a satirical parody of the original 1970s Sealab 2020. An environmentally-themed parody? Where has this treasure been all my life?

Aired: 1994-2001, Cartoon Network; 2001-2004, Adult Swim Space Ghost Coast to Coast was an animated, parody, talk show?! I mean, literally anything is possible when you're drawing it into being. I love humanity.

Aired: 2003, NBC Maybe you know it as MTV Spider-Man? I mean, Neil Patrick Harris was in it. Enough. Said.

Aired: 1996-2000, The WB Superman: The Animated Series had all sorts of complex themes and quality animation. This one was definitely a must-see for comic book-lovers everywhere.

Aired: 1994, ABC:1995, Fox Loveable, nebbishy Jon Lovitz starred in this animated ode to New York City. His character, elitist film critic Jay Sherman, hosted review show, Coming Attractions. His catch phrase was, "It stinks!" So many things were right about this one.

via: Man of Steel and Voice of America

Aired: 1979-1981, ABC A stretchy superhero saving the world? I could totally get into that.

God, The Devil, and Bob

Aired: 2000, NBC; 2011, Adult Swim Religious pressure kept this gem of an obscure cartoon from more widespread consciousness. I mean, the Devil does choose a porn-loving beer guzzler to save the world... I've never wanted to watch something more in my entire life.

Aired: 1994-1996, Fox This '90s animated series follows The Tick, an invulnerable and mildly dim-witted superhero, on his quest to keep The City safe. Now there's a live-action series version of The Tick coming Amazon. OMG! And Whoopi is in it?!? My heart is honestly bursting with anticipation right now, y'all.