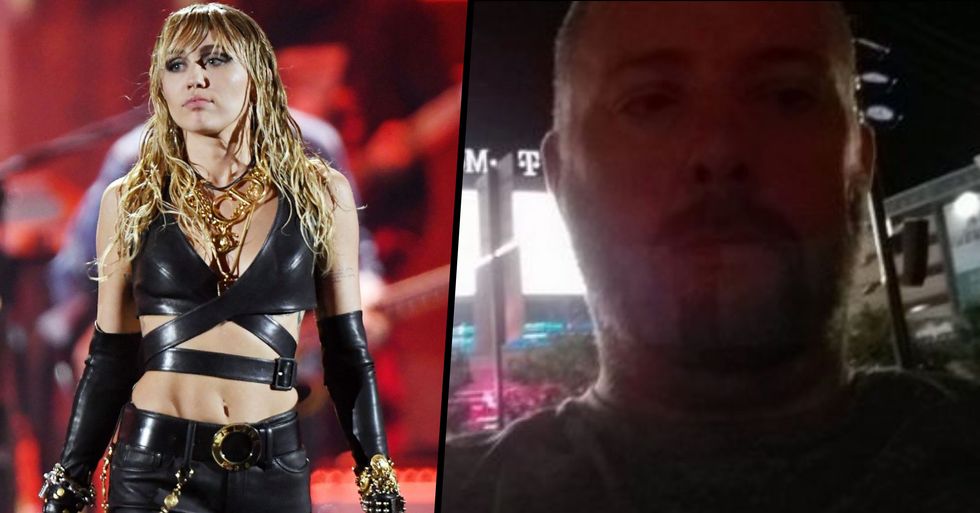 Miley Cyrus has certainly had a rocky summer - from playing the biggest concert of her career to breaking up with her husband... highs and lows, right? It's no wonder she's been posting so many mountain-related posts on her Instagram.

If there's one thing that Miley has probably taken from Summer 2019, it's that life really is a climb. Sadly for the "Wrecking Ball" hitmaker, her journey doesn't seem to be reaching an incline yet. On Monday, whilst performing at The iHeartRadio show in Las Vegas, the singer almost came in contact with a dangerous fan. Thankfully, her security was well aware of the threat and quickly intervened.

Continue scrolling to learn what happened...

It seems like this picture was taken just before her knockout performance, when Miley impressed fans with a selection of her classic hits from the Bangerz album as well as new numbers, like her hit single "Mother's Daughter" and the popular track from her appearance in Black Mirror, "On a Roll."

Miley has been killing it this festival season.

Perhaps her best performance of the summer was when she played to a crowd of over one-hundred-thousand people on the legendary Pyramid Stage at Glastonbury. Many considered this live performance to be a "career-defining" moment for the singer.

Miley has been going from strength to strength.

Luckily, Miley's mom was on hand to offer support.

Miley has said in many interviews that she considers her mom to be her rock. After the turbulence of the last couple of months, she has needed her more than ever. After news that one of the obsessive fans on her security's "watch list" was in the audience, Miley retreated into the arms of her mom.

Miley is used to being accosted by fans.

It's not like Miley hasn't met a couple of odd fans in her time. Miley is open about her own struggles with mental illness and encourages her fans to embraces their quirks. She is a pop star that says it's okay to be weird! Saying that... there's a difference between being weird and being creepy.

Take this guy, for instance. He's been harassing Cyrus' Twitter, requesting that he be her sugar daddy. I mean, come on, in what reality would Miley Cyrus need you to give her money?

In the badass collab between Lana Del Ray, Ariana Grande, and Miley titled "Don't Call Me Angel," the three women reclaim their sexuality and power, singing "Uh, I make my money, and I write the checks / So say my name with a little respect."

You can easily miss it, but if you look closely, Miley Cyrus gets an alarming amount of creepy messages from middle-aged white guys on Twitter. The Johns, Kenneths, and Ronnies of this world seem to think that they have some kind of special connection with the stunning hitmaker.

The messages from these obsessive fans are not just creepy, they show signs of a seriously possessive nature. From the way they talk to the singer, you would think that they actually knew her on some deep, profound level.

What're you going on about?

Some of the messages from middle-aged men that Miley receives (that was a bit of a mouthful...) really are just totally bizarre! This dude has what seems like a full-blown conversation with the singer. He even tries to make her jealous by saying that, if he sat next to anyone else at her concert, they would try to get with him... I mean, this message isn't threatening exactly - if anything it's just sad.

Where's the line between sad and scary?

Although you could just consider Miley's sea of middle-aged male fans to be sad, sometimes, they act out in ways that can't be ignored. Take this fan, Colin McCoid, from East Yorkshire who got twenty-nine tattoos dedicated to Miley Cyrus. That's right, this forty-two-year-old dad of two got twenty-nine tattoos that had something to do with the former Hannah Montana actress. Eighteen of the tats are carefully sketched portraits of her face. He admitted to a Daily Mail reporter: "I got my first tattoo of Miley after I was divorced in 2010, but it got to the point where it was getting obsessive."

Obsessive is the right word...

Miley Cyrus made it clear that she didn't like the fact that Colin had tattoos of her all over his body. The singer joked about it on a talk show saying: "There's a dude that holds a record of the most pictures of my face, he has like eighteen pictures of my face and they're really ugly." As much as Cyrus can laugh about it, naturally, she probably found it pretty creepy, too. The singer ended up having to block Colin on Twitter to stop him from harassing her.

Take "Wrecking Ball" for instance... Miley bares all in that track and gives an emotionally raw performance. But, saying that, she's not singing "I will always want you," to Ronnie, Kenneth, and the dude with tattoos of her face all over his body.

She's singing about someone she actually

Anyone that confuses themselves for Miley's long-time love, Liam Hemsworth, when listening to "Wrecking Ball" should probably go to see a doctor. As much as Miley cares about her fans, just like anyone, she has her own, private, personal intimate relationships with people that actually know her.

You can follow her footsteps on Instagram, you can analyze all of her interviews, all of her songs, read her less-famous siblings' memoirs, heck, you can even wait outside the studio until she comes out and get a photo with her... but that doesn't mean you know her.

Where does Miley feel safe?

Privacy and safety come hand in hand when you're as famous as Miley Cyrus. With the number of obsessive fans that the singer has, never mind the threats from people that actually don't like her, the Miley Cyrus security team always needs to be on red alert.

Trouble brewed while Miley was backstage at the iHeart Radio Festival.

Before the singer was due to go on stage, her security team spotted one of the fans from the "watch list." Any obsessive fans that were considered a potential threat could make the list. This middle-aged gentleman had been relentlessly messaging the singer on Twitter and raised alarm bells when he said that he was excited to see her in Vegas.

The fan that caused the alarm was apparently on the front row and must have looked suspicious to have caught the attention of security. He apparently stated that "it's my life's mission to impregnate Miley." It's little wonder the forty-two-year-old was reprimanded by security.

The obsessive fan is now in jail.

The fact that this dude is now in jail on a felony charge makes you wonder how big of a threat he actually was. If there is cause for criminal charges, perhaps the fan had some disturbing items in his possession - things that could have caused potential harm to the singer. You dread to think... Continue scrolling to read the heartfelt message that Liam Hemsworth posted to Miley Cyrus following their breakup. He truly is a good guy and seems to genuinely respect Miley as an artist and as a friend...