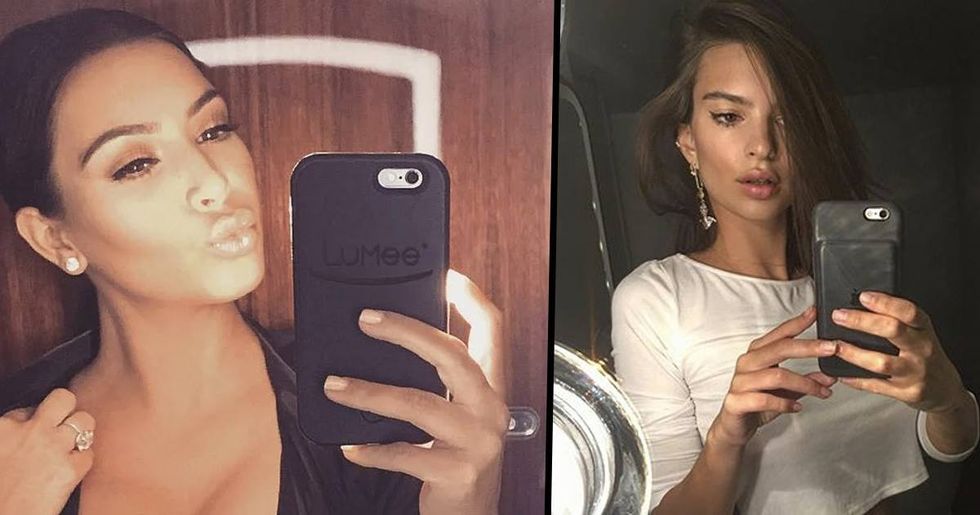 We're all guilty of taking selfies. Because when the lighting is good, your outfit in on point, and your eyeliner goes right, you want to show the world how good you look. And let's be honest, even if it doesn't turn out perfect, there are always those handy Instagram filters to fix our flaws.

And, apart from the overused dog-face on Snapchat, selfies are a great way to document life experiences. Most of our vacation pictures and nights out are captured on the front of our camera - mainly because it's easier than awkwardly asking someone to take a photo of you and your mate downing sambuca.

Is our obsession with self-photography a problem though? We're not talking about the risk of hitting someone in the face with a selfie stick, although that probably does happen. But is there a fine line between vanity and our mental health.

Turns out, there is.

When did it all begin?

The term 'selfie' entered the Oxford Dictionary back in 2013, which was around the time smartphones with front-facing cameras were released.

The hashtag 'selfie' has over 368 million posts on Instagram, and every generation is joining in with the craze.

The Queen of selfies.

Most celebrities have joined in with the selfie hype, but reality star Kim Kardashian West has been officially crowned as the Queen of selfies.

And the famous Oscars selfie.

The 2014 Oscars produced what is now being called the most famous selfie of all time. Though pretty much all of our attention is on Bradley Cooper.

But is it healthy?

Taking pictures of yourself seems pretty harmless; you're probably thinking there's nothing to be concerned about when it comes to selfies. Right?

Yes, we're being serious. 'Selfitis' aka the obsession of taking selfies, is now classified as a genuine mental condition.

There are three strains of the condition.

Researchers at Nottingham Trent University and Thiagarajar School of Management have theorised three strains of Selfitis: "borderline", "acute" and "chronic".

If you take three selfies a day but don't post them online, you might fall under the 'borderline Selfitis'. Yes, as little as three a day could be a problem.

So acute Selfitis is taking the same amount of selfies a day as the borderline strain (three) but for those that post the selfies online.

The most severe strain of the condition occurs when people have an almost 'uncontrollable urge' to take selfies and post them online more than six times a day.

The paper, written by Dr Mark Griffiths from NTU, concluded: "This study arguably validates the concept of selfies and provides benchmark data for other researchers."

Started as a hoax?

Dr Mark Griffiths said that, just like internet addiction, "the concepts of Selfitis and selfie addiction started as a hoax, but recent research including the present paper has begun to empirically validate its existence."

So maybe take selfies in moderation.

If you think you're becoming a bit too attached to taking selfies, it might be a good idea to put down the phone or cover your front camera with a sticker.

The first step is admitting you have a problem. The second is stop taking so many selfies.

Some aren't taking the news well.

Warning: your friend count might drop if you pull them up on their selfie-taking habits.

But some people are really obsessed.

Junaid Ahmed, who has 50,000 followers on Instagram, admits to taking over 200 snaps of himself... every day.

We wish we were though. The 22-year-old told the BBC if one of his pictures gets fewer than 600 likes he will delete it.

Elena Tryfonos, an admin worker from Essex, admits she takes up to 50 selfies to post online.

The power of filters.

In an interview with TheSun, Elena said: "I went from taking a couple of selfies a week to around 50 a day. Then I discovered Snapchat filters and loved how they made me look. My skin looked flawless and my eyes were shinier."

There's even a show about Selfitis.

Drinking beer in a nun outfit, why wouldn't you take a selfie? Sometimes it's justified.

Just put down the selfie stick.

Don't be that person that wacks everyone walking past with your selfie stick. Let's leave them in 2018.

And if you need any help.

Don't worry, the internet has your back. YouTube is filled with the do's and don'ts of selfie-taking.

Because, apparently, there are a few rules.

There's a lot to consider before taking a selfie. Is the lighting good? Can you see what your new top says? Have you got enough highlighter on? Is that the right angle?

But no one will beat the queen.

Her royal highness, Kim K, has probably inspired millions to join the selfie craze. It wouldn't surprise us: look how good she looks.

Because we all do it.

According to the Pew Research Center,  91% of teenagers posted photos of themselves online – an increase of 79% compared to 2006.

In fact, the first out-of-this-world selfie was taken in 1966, years before the trend became popular.

This is NASA astronaut Buzz Aldrin on his spacewalk during the Gemini 12 mission. Now that's pretty cool.

He's pretty proud of it.

Which is no surprise. Maybe him and Kim K can do a collab together, we'd pay good money to see that.

But for the on Earth selfie takers.

Don't get addicted. You don't want to end up being obsessed with selfie-taking you miss out on the real world.