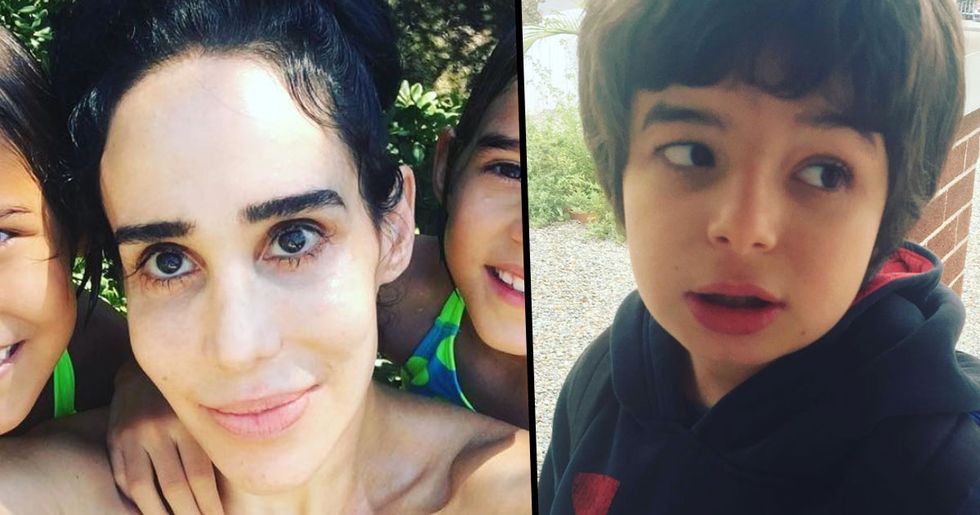 Back in 2009, the world was introduced to "Octomom," the California woman who, incredibly, gave birth to octuplets. Yes, that's 8 whole babies all in one go. I'm wincing at just the thought of that.

Natalie Solomon, who already had 6 other children, instantly rose to fame following the birth of the octuplets, who were conceived via IVF with an anonymous sperm donor.

The media were quick to scrutinize the single mom, however, and she hasn't been shy of controversy in the last decade.

But, now, Natalie is back in the spotlight for a much more somber reason. She has revealed this week that one of her older children, Aidan, is severely autistic and, despite being fourteen-years-old, is "going on 1 in his head."

Keep reading to hear Natalie's heartbreaking revelation about her son, and how she has turned her life around for the better of her children.

Natalie Solomon is a medical marvel.

Back in 2009, Natalie made headlines when she became the first, and the only, woman in the world to successfully birth 8 healthy babies in one go.

Natalie was implanted with twelve embryos.

Her IVF was administered by Dr. Michael Kamrava, who had also implanted her for all 6 of her previous pregnancies. However, Natalie remains adamant to this day that she wasn't aware that she had been implanted with so many, and that she only wanted twins. She also insists that Dr. Kamrava implanted twelve without her knowledge.

She insists that her doctor talked her into carrying more fetuses.

According to Natalie, Dr. Kamrava pushed her to consent to implanting additional embryos while she was strapped to a gurney and under the influence of heavy narcotics.

“He told me we lost six embryos, he said they were expelled out of me, and that’s why he wanted to implant another six," she claimed.

Dr. Kamrava has since had his medical license revoked.

She became the first woman to carry octuplets to full term, and it took a team of forty-six doctors and nurses to perform the cesarean section when she went into labor at thirty-one weeks.

And, even more miraculously, the babies were all born in good health.

The babies weighed between 1 pound 8 ounces and 3 pounds 4 ounces, and there were 6 boys and 2 girls - Nariyah, Maliyah, Jonah, Jeremiah, Isaiah, and Makai. Never before had so many been born at once and survived the ordeal.

Natalie was quickly dubbed "Octomom" by the tabloids.

She and her family were catapulted into instant stardom.

Though the fame wasn't kind to Natalie.

The Octomom was criticized by many for deliberately becoming impregnated with so many fetuses in one go, especially considering that she already had 6 children waiting for her at home.

She was dubbed "irresponsible."

And many argued that she only got pregnant for the fame and, in reality, would struggle to feed and appropriately care for her fourteen children as a single mother.

And, as time went on, people lost interest in the octuplets, and the single mom started making headlines for all of the wrong reasons.

A lot of her actions were heavily criticized.

She was accused of spending hundreds of thousands on plastic surgery to resemble her idol, Angelina Jolie and she was labeled a single mom on food stamps and a crazy who would go to extreme lengths to build a family.

Natalie had a short-lived career in pornography and stripping, which led people to be concerned about the welfare of her fourteen children at home. A suit by Gloria Allred followed accusations of child endangerment and exploitation, and Ms. Suleman went on Oprah and Dr. Phil to stand up for herself and, ultimately, to tell her side of the story.

After all that, Natalie found herself becoming dependent on drugs and alcohol.

She has admitted that she turned to booze and Xanax between the years of 2011 to 2013, before briefly checking into rehab. During this time, friends and family helped to take care of the children.

She claims that she did everything for her family.

“I was pretending to be a fake, a caricature, which is something I’m not, and I was doing it out of desperation and scarcity so I could provide for my family," she told the New York Times. “I’ve been hiding from the real world all my life."

But Natalie has since turned her life around.

She is now working on a book and lives a raw vegan lifestyle with her children. As for the octuplets, they are now ten years old and are all thriving.

The same can't be said for all her children, however.

Despite the great news about the octuplets, who weren't expected to survive long past infancy, Natalie has recently broken some heartbreaking news regarding one of her older children.

Natalie recently made a devastating revelation about her son, Aidan.

The single mom confirmed this week that Aidan, who is fourteen-years-old, is severely autistic, and requires round-the-clock care and attention.

She made her announcement through an Instagram video of Aidan playing in the park...

In which she addressed hateful people who have been targetting her family's home. She began the post with: "The primary reason for sharing the following post is to set strong boundaries with self-entitled bullies, who have been harassing me and my family in our neighborhood. My past attempts to stand up for my family were apparently to no avail. Slashing my vans tires (within months of moving in), breaking my back headlights, pouring coffee all over my vehicle, leaving unwanted discriminatory notes on my van and property, and relentlessly filming my children, who do NOT want nor ask to be filmed, is unacceptable."

The attention has been causing distress to Aidan and the rest of the family.

And she went on to inform her 95,000 followers about Aidan's disability: "This is my baby Aidan. He is 14 years old, severely autistic and requires total care. Aidan relies on me, his mom, to completely assist him in meeting all his needs in activities of daily living. Aidan is non-verbal, requires feeding, changing (he is not potty trained), bathing, and one to one supervision, as he has no safety awareness and would walk aimlessly into traffic."

She explained that she is Aidan's single care-giver...

"I, his mother, am, and always have been, his ONLY care provider. This “job" is my life (other than caring for 13 other children singlehandedly). My children are my LIFE. Aidan has been off two months for summer and attends a special needs school during the year. I love him with all my heart and will care for him until I die."

Natalie has had enough.

And she went on to detail some of the vile abuse that she and her family experience on a day-to-day basis, including having her car and property defaced. She finished her post with: "I chose to share about Aidan, who is both a blessing and challenge in my life, to provide contextualization for you oblivious and condemnatory critics, who erroneously believe I am compartmentalized from my children. You violate me, you violate them. Enough is enough." Let's hope that Natalie and her children can get the respect and privacy that they deserve. Did you hear about the lady who gave birth to septuplets? Keep reading for her story!