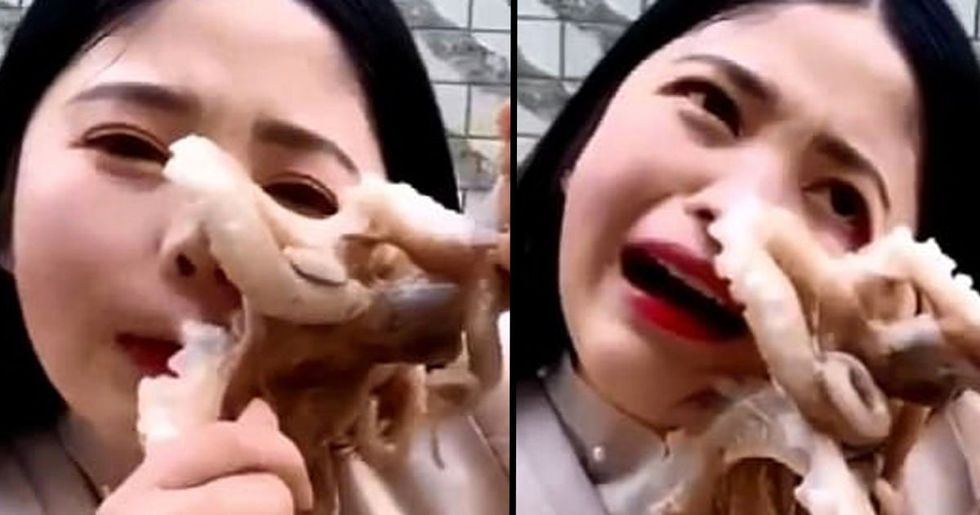 In recent years, there has been a bizarre trend for online eating challenges. For some reason, there is an audience out there who find watching people chow down on weird stuff truly captivating. Remember the Tide Pod challenge? The company ended up having to speak out against the trend, as a worrying number of people decided to film themselves eating these highly dangerous (and undoubtedly disgusting) laundry detergent capsules.

It's clear eating challenges aren't for the weak. But one which has recently taken the internet by storm looks potentially even more hazardous than the rest. A vlogger known as Seaside Girl Little Seven has gone viral for all the wrong reasons, as she attempted to consume an octopus - while it was still alive! The octopus wasn't having it, though, and ended up retaliating in a painfully ironic way - and the internet can't believe it!

And there's one area where these challenges typically manifest.

That's in the world of eating. Consuming strange substances (sometimes under a time crunch) is a popular internet trope.

At the beginning of 2019, something called the "Tide Pod challenge" started creeping up online.

The official Tide account was forced to take a stand against the challenge in an attempt to protect the health of those searching for five minutes of viral fame.

As one vlogger proved this week.

She's clearly a fan of an octopus.

It appears she enjoys both playing with them and eating them, if her web presence is anything to go by.

But her latest post took her love to a whole new level.

In it, the vlogger attempts to eat a Giant Pacific Octopus. But not only does she not season or cook the fish - she actually tries to eat it alive.

This enormous octopus is no joke.

They can grow to absolutely enormous sizes. Along each of their eight arms, a fully grown member of the species will have almost three hundred powerful suckers.

Eating almost alive fish is actually a delicacy in some parts of the world.

The fact it's sometimes still moving is thought to be a credit to its incredible freshness - although there's something a little bit creepy about it.

Not put off, though, the vlogger attempted the strange challenge.

She shared the results on her social media platforms - and they were not what she expected.

She first attempted to put the octopus in her mouth.

Although for many, octopus is a delicious snack, we're pretty sure the reason for eating the creature live was not its taste.

Nonetheless, she (bravely?) made her attempt.

At first it seemed as though everything was going according to her (slightly bizarre) plan.

But then things took a turn.

It seemed as though the octopus realized what was happening to it - and decided it needed to take its revenge!

It decided to retaliate in a distinctly octopus fashion.

It pulled itself away from the vlogger's waiting mouth, and suctioned itself to various areas of her face, instead.

It's clear octopuses are not to be messed with.

For creatures who look like they're made of jelly, they're actually surprisingly powerful - and those suckers really pack a punch!

At first, the vlogger laughed along.

But it quickly became apparent it was actually not joke, as the octopus refused to let go and started to hurt her.

The giant Pacific octopus is actually a very successful predator.

It can use its many powerful suction cups to pull in a large number of types of prey - including (it seems) human beings!

The girls seemed a little shaken up.

Although after giving up on the challenge, she did make a promise that she was going to try the bizarre attempt again.

Which may be a little foolhardy.

Our rule of thumb is, if something you're trying to eat makes you bleed, then maybe don't bother, and eat something else instead.

People across the internet had a pretty similar reaction.

They were almost universally on the side of the octopus, and couldn't understand why the girl was making this dangerous (and potentially cruel) attempt.

There was not much in the way of sympathy.

One Facebook commenter wrote, "Not so funny being eating alive ?." Many thought the whole situation was pretty ironic.

There is a sort of retribution arc to the story.

The girl tried to eat the octopus alive - and in return, almost got eaten alive right back.

One thing is clear, though.

Don't mess with an octopus - because they have a tendency to mess with you, right back!