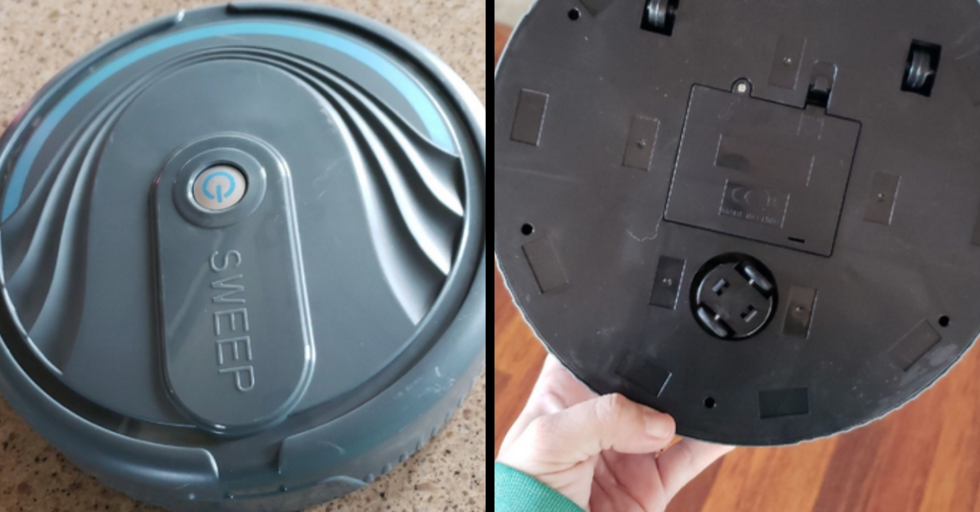 Listen, I love the Toy Story movies as much as the next '90s kid, but I couldn't help but be drawn to the Mr. Potato Heads and Slinky Dog toys more than Woody and Bo Peep. There was just something about those toys up in Andy's room that made them feel... lame. Unspectacular. Off-brand. If Buzz Lightyear was the big flashy Christmas toy, Woody was the off-brand dollar store whatever that a well-meaning grandmother would get as a Christmas present, only to make her Nintendo Switch-craving grandson cry.

Is that harsh to Woody? Maybe a little! But the point is, Off-brand items bum me out. It just feels like someone made a product they don't care about. If they were deeply invested in their work, why not come out with an innovative, original product?

But look, we're all going to revel in our discomfort for off-brand together, with these images of shockingly depraved knock-off products. Your jaw will drop when you see how brazen some of these can be.

Who needs a swept floor anyway?

Mother knew I wanted a Roomba but didn't want to waste that much money on one. So she found one for a bargain! Note, it has zero vacuuming ability. - edgeofruin

These crappy ripoffs of Netflix, Twitch, and Spotify. - Horrorkid908

I present you the pinnacle of Shanghai markets: a hot glue NY Yankees hat. - Gradians

No one's going to inspect your Supreme shirt.

Why spend $1000 on a supreme shirt when you can buy this? - pumatruma

He likes it, hey Nike!

Do not eat his cooking.

North Face never tells us how huge the mountain is.

Why get the North Face when you can get the Huge Mountain. - guricosan

But where's his grandson Mart-eye?

20 minutes before the meeting, the designers realized they'd forgotten to make a logo.

I'm not joking. One of Trump's proposed logos for "Space Force" is a lazy rip-off of NASA. - BoogsterSU2

It's got one of my favorite Mariope games.

Looked closely at my Nintendo Switch case for the first time. - cozmcrae

Dude, rewind Halo before you bring it back.

Found a hell of a deal on an Xbox. - sireskimobro

Two for the price of one! - llondru-es

The Battle of the Century! - SenorRango

There's a nightmare in my boot. - BigCballer

Some off-brands are secretly genius.

I kinda like the Thrasher Peppa shirt, not gonna lie. - BedsheetCover

Pepperoni is bad for my hair.

Fans of Star Smokes: The Last Cigarette will not like this retconning.

The holidays can be a time of heartbreak.

Imagine asking for an iPhone X this Christmas and you receive this instead. - GreebSetter

Slippery as an eel.

My favorite dessert is iced creamp.