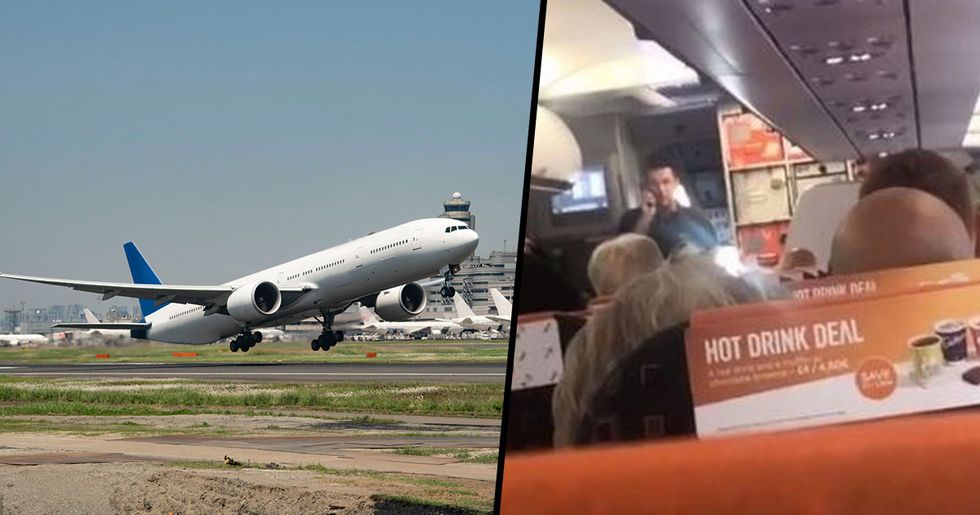 Vacationers in Manchester, U.K, got an unexpected surprise when they arrived at the airport for the scheduled flight to Alicante, Spain.

After the pilot failed to show, the passengers for the September 2nd flight thought all was lost. Who could blame the British vacationers for wanting to escape the British fall chill and grab the last bit of summer heat, after all?

When they found out that the pilot who was meant to fly them was stuck on home standby in Liverpool, it seemed as though the flight was going to be called off.

Fortunately, an off-duty pilot in the area was keen on getting a bit of that Spanish sun himself...

There's nothing worse than a delayed flight.

Saying that, Instagram user, "sarahsomeplace," didn't seem to mind when her Thai Airways flight was delayed. On the account of the airline offering her and the other passengers complimentary drink vouchers and a free Burger King!

The Easyjet flight in Manchester had a much more novel solution to the delay.

After hearing that their flight was expecting a long delay, one of the passengers, Laura Bradley, told her husband, Michael, to bring along something that could solve the problem...

The perks of being married to a pilot, eh?

Fortunately for Laura and the other passengers of the delayed Manchester to Alicante flight, her husband is a pilot.

If there was ever a reason to want to marry a pilot...

That being said, a pilot for a husband seems to already be quite desirable.

Attention men that struggle with the ladies!

Maybe you ought to consider getting yourself a pilot's license. Word on the street is that being a pilot makes you way more attractive.

Saying that, some people will always want more...

I mean, a "Pilot Doctor..." Really, Anthony? That sure is a lot to ask for on your dating site profile. But, eh, you never know... aim high.

Personally, I don't find Tom Cruise attractive at all. I mean, his weird Scientology vibes and all the strange conspiracies surrounding why he never sees his daughter, Suri, is a total put off. Saying that, perhaps his Top Gun role did make being a pilot very Hollywood.

Loads of Hollywood stars have actually got pilot licenses.

Did you know that John Travolta can fly planes? He's actually an avid aviation enthusiast. The Grease actor has actually had his pilot's license since he was twenty-two-years-old and, according to Business Jet Traveller Magazine, "Flying is oxygen to Travolta."

I'll tell you who else has pilots licenses...

The fact is that having a pilot's license can make you seem impressive...

It's no surprise that so many people will lie and pretend to be a pilot.

In the 2002 movie, Catch Me If You Can, Di Caprio famously played the role of Frank Abagnale Jr. Frank gets away with pretending to be a pilot, as well as a doctor and a legal prosecutor. The movie was actually based on a true story, involving a guy with the same name.

There's one problem with pretending to be a pilot...

For your safety and everyone else's...

It's probably a good idea to not attempt to imitate a pilot.

Maybe going out with a pilot isn't all it's made out to be?

my boyfriend’s a pilot student and so he talks about pilot stuff to me as if i know it and it confuses me as fuck b… https://t.co/g4NmRMMSwL
— Bianca Labraque (@Bianca Labraque)1546763125.0

I mean, from this tweet from someone who is actually dating a pilot, it seems as though it can be quite boring.

A real-life pilot confirms this.

Michelle, who is a pilot herself, does not seem too keen on the idea of hooking up with a pilot. I'm not sure what this "pilot training" talk everyone seems to hate so much is about but maybe it's worth keeping in mind.

There's one crucial thing that a pilot-boyfriend does bring to the table...

You can get flown all around the world!

Seems too good to be true?

Well, think again... Twitter user, Ari, proves that having a pilot for a boyfriend can mean you have the most romantic dates ever.

Would you trust an off-duty pilot?

When the Easyjet passengers flying to Alicante heard about the alternative solution to their absent pilot problem, you can imagine, a few of them were a little apprehensive.

I mean, there's already a lot of stress involved in flying.

Especially if you're flying commercial... I mean, think of the leg room and, if you have a rude person in front that decides to lean their seat all the way back, it's even worse.

We all know how difficult it is to pack for a two-week vacation when the baggage allowance rules dictate that we can just about take our toothbrush and a change of socks.

Don't mess with the air con!

I once had the pleasure of being sat next to a guy on a plane who just couldn't chill out (pun intended) about the temperature. Throughout the four hour flight, he kept leaning over me to mess with the air con. Absolute worst.

As bad as a little boy with a drum?

Well, I mean, I'm yet to experience a little boy banging a drum in my face on a plane ride but, fair, that would be stressful. Kids causing a nuisance on a plane are stressful though. There's no getting away from a troublesome toddler once you're way up in the sky, is there?

Rowdy adults can be just as bad, mind...

College students on spring break, bachelorette parties that have been drinking bottles of wine for hours, you know what I'm talking about... I mean, personally, I struggle to deal with anyone on a flight that's an octave too chirpy. I feel as though flights deserve the tranquility and stillness of a dentist's waiting room. But maybe that's just me.

Finding out that your pilot hasn't shown up and you could be getting flown by some random guy on the flight that just happens to be a pilot might draw concern.

The off-duty pilot reassured passengers over the tannoy.

Naturally, passengers were a bit puzzled when Michael, dressed appropriately for his family vacation, stepped up to fly the plane. Over the tannoy, he reportedly said: "So if you're alright for one of your pilots to look like this today, we'll go to Alicante."

I wonder if anyone got off the plane...

According to Michael, who spoke to The Manchester Evening News about the experience, the passengers were more than happy with him taking over.

But how did Michael clear it with EasyJet?

According to Michael, all it took was a quick call to Easyjet and he was given the all-clear to fly. He explained that he called them up and said, "'Hiya, I'm standing in the terminal doing nothing. I have got my license with me - deliberately from being punched in the back of the head at 3 am - I have got my ID with me and I'd very much like to go on holiday and if you need a favor I'm standing here ready to go."

And away they went!

Off duty pilot on our flight steps up to the plate and flies us to ours (and his) destination to save us being dela… https://t.co/ouoNgUT7Bg
— Angela Senior (@Angela Senior)1567458347.0

One happy passenger, Angela, took to Twitter after her flight to thank the off-duty pilot. Calling him "Mike" in her tweet, it seems as though the passengers of the Manchester to Alicante flight were very grateful to him for saving their vacation.

Alicante in September sure is beautiful.

One customer who spoke to M.E.N, seemed happy that the off-duty pilot stepped in. She said: "I was a bit nervous when I was first told, but once he told us on the plane I was just relieved that we weren't going to be delayed." I mean, you wouldn't want to waste any of the time you were supposed to be spending in the warm breeze of Alicante, right?

A spokesperson for EasyJet defended the decision to let Mike fly.

There's always going to be someone that complains that it wasn't safe to let an off-duty pilot fly a plane that they were not intended to. To cover their backs, EasyJet released a statement saying: "We are grateful to one of our pilots who was traveling on holiday from Manchester to Alicante on 2 September with his family and volunteered to operate the flight." As well as thanking Mike, the budget airline explained that the delays had been due to "the knock-on effects of the French ATC failure on Sunday" and expressed that it was all above board. Because Mike had his license and ID with him, he was "in line with regulations." There you have it! Interested in reading more about extraordinary acts by pilots? Continue scrolling to learn all about the pilot that managed to secure a landing without any front wheels!
20%

$11.94 $9.55
Buy Now
See More Deals
We hope you find these deals as awesome as we do! Just an FYI: we may receive a share of sales from links on this page