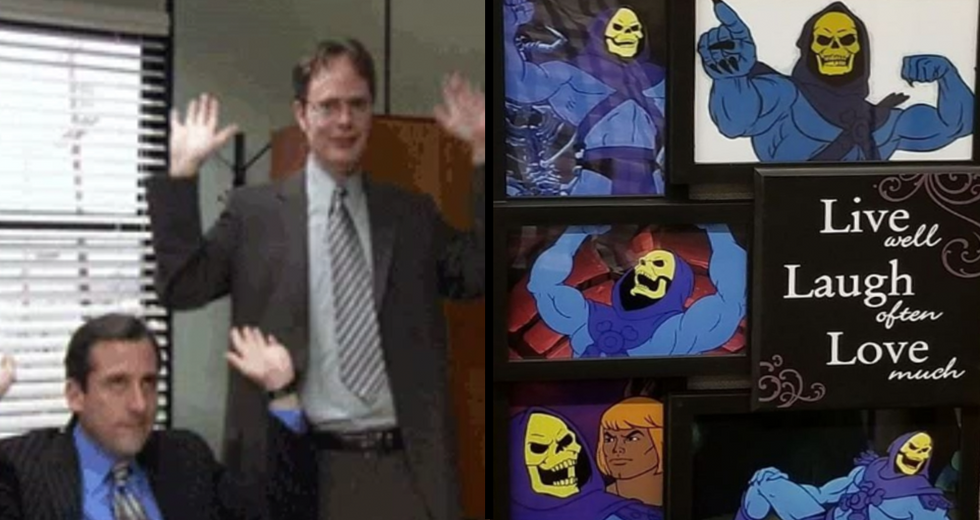 If you're working a 9 to 5 job behind a desk, you might notice that things can get monotonous. Sitting at a desk for eight hours a day can definitely wear on a person! Office jobs can be great, but they often require a little spicing up now and again. So how do we do that?

Well, Reddit asked the same question. And people have been posting their own little hacks for making a desk more fun. Sure, it's a workspace – but that doesn't mean you can't make it pretty! Check out these Redditor's replies, and see if any stand out to you. Hopefully, this story will give you a few ideas on how to make your own workspace a little brighter!

This first one is a little obvious.

Tilted my screens away from the main entrance so I can go on Reddit. -JoshYx Well, duh. We all do that.

Bring in a little holiday cheer.

During the month of December, I plug in an 8" tall USB Christmas tree into my laptop and leave it on my desk. The only presents I get under my tree are documents to sign, but at least it's something, right? -3ebfan

Have some jurassic fun!

Two plastic dinosaurs, one herbivore, and one carnivore. Objectively so I can use them to rubber-duck problems, but more often just to have one curse the other’s sudden but inevitable betrayal. -spunkycomics

Be the spook you want to see in the world.

I work in insurance claims. My desk has plastic fill size 3D skulls all over it from Halloween prop stores year round. Dunno if it's pleasant, but you don't get asked a lot of nonsensical questions. It's also kinda random and management likes it. -CPTSaltyDog

No windows? No problem.

My desk faces a wall in a windowless office so I printed out and put up a picture of a window with a garden view. You’d be surprised to know it actually helps. -mountaindynamic

Just don't be afraid to get creative with that fake-window idea.

I used to work with an office that had cubes in the interior with no window views. A guy a few rows over had printed a large picture of a window and had it at his desk. What was this fake view of you ask? A garden or forest? Maybe mountains or a lake? No, it was a parking lot. He printed out a picture of a window looking onto an average parking lot full of average vehicles. -JOHNxJOHN

Go ahead and get cozy.

A small lamp. I love the warm glow. Slippers and a soft blanket to throw over my lap. It gets cold in here, and this makes me feel cozy. A great mug for my coffee/tea and a high quality head-set. -pamdndr

If you have any special skills, use them!

One of the managers from another department does little animal doodles of an animal holding a sign with your job description.

So far I have “Timetable Duck" and “Data Dawg". My colleagues have “Alumni Llama" and “Quality Goose."

My boss has “Boss Bear." They’re super cute and sometimes he colors them in.

Whenever anyone new starts that he gets to know they get one too. -reddit_alien0010

Make the most of travel opportunities.

Me and my team travel a lot for work, so every time we go to a new country we get each other souvenirs. My desk is a hodgepodge of souvenirs of all over the world. -cascua

A sense of humor takes you far.

Part of my duties is training new, younger staff after they go through orientation. They are at my desk often looking at my monitors as I take them through the wonderful world of architectural drafting.

I have a series of folders on my desktop that can't be missed. I have an organizational system for them but that's not the point. The folder names however always raise some eyebrows. The tiny reactions I get makes training so much better.

It has almost blown up in my face once, but still worth it for my own sanity. -rqtech

Try out your green thumb.

I've been growing an African violet from the one-ish leaf for the past 4 years! It has FIVE buds, and it looks like blooming is going to start VERY soon! I named my plant RJ, after my close friend in college who took his life several years ago. Rule of thumb is you can't name your AV until after the first bloom! So yeah, here's RJ :) -GlockTheDoor

For those who work from home:

I work from home, but my office is very separated from the rest of the apartment. I have a page a day cat calendar that has cat jokes, facts, and pictures. Would you like to subscribe to cat facts? I have many. -PandaProphetess

Capitalize on inside jokes.

First week, someone called me a "penguin sympathizer." Now my desk is covered with anti-penguin propaganda. -Clashin_Creepers

Saw this Skeletor "Live, Laugh, Love" some time ago on Reddit and I had to recreate it. After finding the frame online, I made two, one for home and one for work. I regret nothing. -[deleted]

I added some photos of my family, make it worthwhile to actually go to work. -TheRealCharlieMunger

Make your own day, AND someone else's!

My mom has this picture of our dogs that gets passed around to people who are having a bad day. -koalafiediswear

Establish yourself through fear and intimidation. Or, you know, just a bunch of weird stuff.

A shelf labeled “implements of torture only" for my various hole punches and staplers.

A collage made with pictures of all of these strange medical mannequins I found in a magazine.

A picture of a cup of coffee (we have to use the styrofoam cups and terrible coffee with powdered creamer).

I severed the finger off of a fake hand, put it over a pencil among my pens, and use it as a holder for my rubber fingertip paper grippy thing. -PatricksFisher1

Get yourself a friend!

Fish tank. 9-gallon cube tank with a betta in it. He's my buddy, and we both hate my boss. 1kSuns

Some succulents are super relatable.

A cactus! So I know I'm not the only one here slowly dying in an unsuitable environment. Marsmanic

I go for the zen desk. Mouse, keyboard, screen. Absolutely nothing else.

I find there's a direct correlation between the clutter on my desk and my stress levels.

I'm not implying causation, but when my desk is free I am less stressed. -FrannyyU

And other people need lots of color.

I have a blue brachiosaur with a fake succulent on its back, a hippo, some Harry Potter stuff, photos, my binder is flowered, and generally, everything is very happy and colorful. You should have seen it at Christmas. -crochetmeteorologist

The Ultimate Desk Adornment, if we're being honest.

A mix of utility and fun.

At my desk I have:

Pretty sure Ron Swanson just dipped into this Reddit thread.

A decommissioned landmine and a sawed-off shotgun. -Samuellove92 Thanks, Ron! (Please refer to Parks and Recreation for the explanation behind this joke.)

Whatever makes you chuckle.

A picture of a hedgehog wearing socks. It was posted in r/pics a while back and I thought it was good to have around when I am having a bad day. Just look at it and laugh hysterically. All good after that. -achilton1987

Bring in a conversation piece.

I brought this old-timey phone I have. It doesn't work, but it's cool to look at and a great icebreaker when working with new people.

My coworkers also once took it upon themselves to add little touches to my desk area when I called in sick one day. --eDgAR-

Remember to celebrate yourself.

Nobody remembered my birthday, so at lunch, I got myself a giant cat balloon and a balloon that says happy birthday. I also got myself party hats that say happy birthday and a plush pillow of the face of a Persian kitty.

The balloons are slowly deflating but I mounted my party hats to the kitty pillow and he stays there.

It was probably awkward for my team to see myself do all that tbh, but I had some fun with it.

May edit this later to have a link to my kitty setup. -cmmwarren1992

Antibacterial spray and paper towels. It's better than wipes because no one asks to borrow it and I can keep my area very clean. So when someone comes to talk to me while they hack up a lung, I can sanitize the area the second they leave. With an autoimmune disease and a family to feed, the spray is my sanity. -MommaBearJam

The truth is out there.

Not my desk but I have a locker and for the last 9 years I have a had a photo of Fox Mulder stuck on the inside door.

As a straight male, I'm often asked why it is not a picture of Scully, but I don't respond as I have a rule not to answer stupid questions. -Elbonio

Pick a theme and go all in.

Ooh, my time to shine. I got so bored of our desks that I converted mine into a classy whiskey library.

First I bought a roll of oak themed drawer liner for $5 as my base. Then I got a fake leather placemat, typical for an executive who wants to project prestige on a budget. Globes and bank lights were too expensive, so I bought a 4-pack of clay coasters with a vintage globe print. I splurged on two whiskey glasses ($20), figuring I'd actually like those, and sandwiched a couple nice looking design books (Tufte) between two nice bottles of whiskey.

The end result was actually quite warm and inviting, and people did stop by for a glass now and then. -notjustanymike

Share these fun office tips with friends and co-workers!
20%

$24.83 $19.86
Buy Now
See More Deals
We hope you find these deals as awesome as we do! Just an FYI: we may receive a share of sales from links on this page