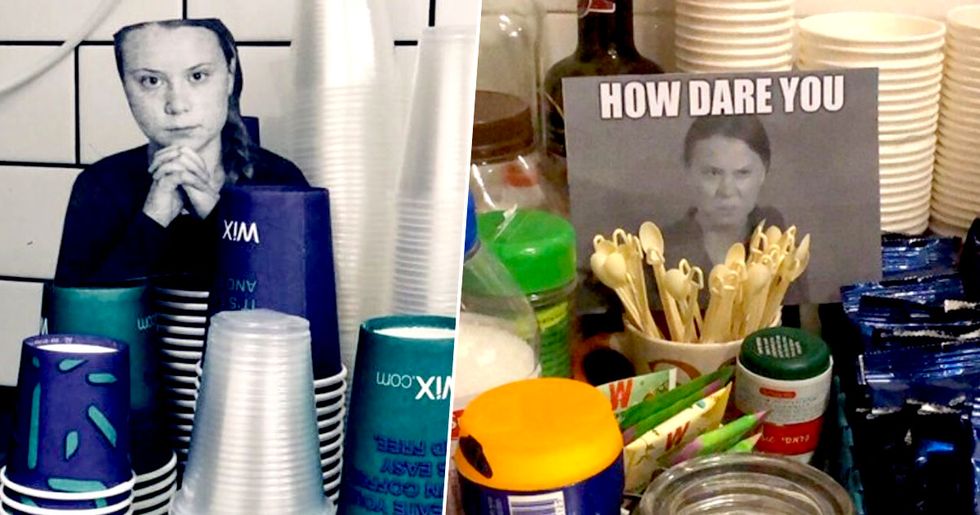 Greta Thunberg has got to be the biggest name in the world right now. From straight outta nothing, Greta has gone from a schoolkid with passion, to the face of the Extinction Rebellion. She's been met with her fair share of criticism and very few people have light opinions on her. You either love what she's doing, or hate everything she stands for.

However one thing is certain. She's making a huge impact. Even those criticizing her are still, in turn, raising awareness about what is going on with the climate.

She's built up some great friendships with other huge celebrities too. Just last week Greta went on a bike ride with one of her biggest supporters, none other than Terminator himself, Arnold Schwarzenegger.

And now it has emerged that people in offices across the globe are using her face to stop people from using single use plastics.

Keep scrolling to find out more about Greta and the impact she's been having!

The actor offered to lend her an electric car so she could get around the country without giving off any toxic emissions.

The pair became acquainted when, in May, Greta opened the 2019 Austrian World Summit of non-profit environmental organization R20 Regions of Climate Action, set up by Arnie back in 2011.

And, as a result, the pair have struck an unlikely friendship.

And Arnie is now one of her most vocal supporters.

They even went on a wholesome bike ride together.

Recently, Arnie shared a handful of photos of himself and the teen activist enjoying a spot of cycling together around Santa Monica.

And referred to Greta as his "hero" and "friend."

He seemed thrilled to have met up with Greta...

And even introduced the teen to his daughter, Christine.

It's great to see such high-profile celebrities get on board with the fight against climate change... Who will be next?

Well now it has emerged that offices are using images of Greta to make their staff think twice about plastic usage.

Famous of course for staring deep into the soul of Donald Trump, now Greta is staring at everybody - and that includes YOU. If you're reaching for a single-use plastic spoon, fork, straw, or cup - then you better believe that she is going to be making you reconsider.

The images are popping up in Israel.

Many of the images seem to be emerging from Israel. Offices in places such as Tel Aviv and Jerusalem. According to Haaretz journalist Allison Kaplan Sommer, employees are printing the posters themselves, and placing them near to plastics in an attempt to deter others from using the unfriendly material.

One of the images shows Greta with the infamous 'How Dare You' text written above the picture. If I had these things dotted about my workplace, I'd certainly be thinking twice! Keep up the great work Greta.