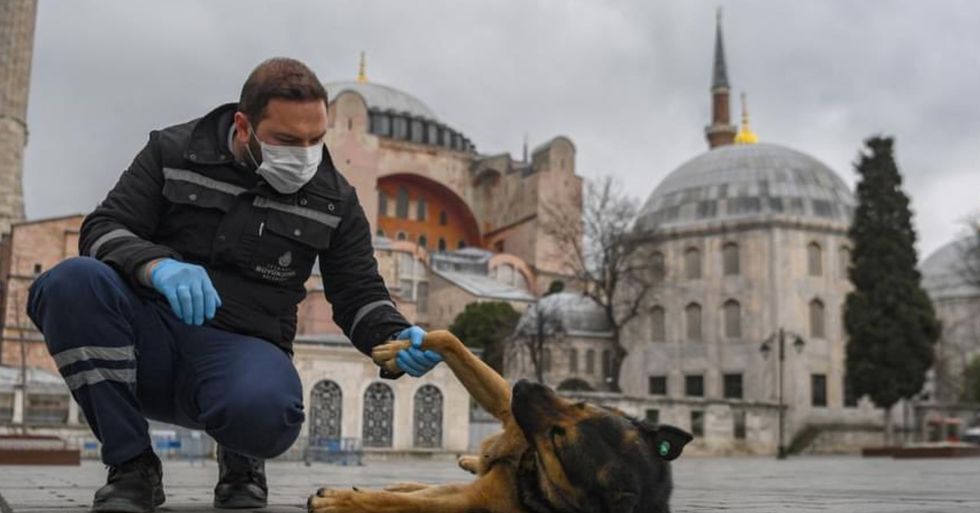 While the pandemic continues to bring the world to a stand-still, it can be easy to forget about those who are suffering on the outside world. Yes, we're trying to protect vulnerable human beings in this time of need, but what about stray animals who depend on street food to live?

Well, Turkish officials have been given the task of providing food check-points for stray animals and the photographs are absolutely adorable.

Read on to see why it is important for them to provide this service...

Over the past month, we have all been in self-isolation.

This is because the disease has been spreading at an alarming rate...

And now, almost 2 million people globally have been infected with the virus.

Self-isolation has now been deemed as the most effective way of combating it.

But it is still spreading very easily...

So remaining isolated at home is the safest option for many.

Millions are now quarantining themselves at home for weeks at a time in a bid to provide some sort of aid to the crisis.

Many have been forced to temporarily leave their jobs to do so.

They have no option but to sit in their homes and think of ways to stay entertained. But it's a small price to pay for the overall outcome.

It turns out that all the Netflix in the world isn't even enough to keep us entertained for this long.

But, while normal people are looking for ways to spend their time...

Others are out there acting as essential workers, getting on with their designated roles, despite the danger this disease is presenting.

From nurses to zookeepers to retail assistants...

Our key workers are really going that extra mile to help protect society in order to make sure we can have some normality in our lives.

However, there is now a new group out there doing God's work on the ground.

Due to footfall decreasing immensely in the past few weeks, the country is experiencing another crisis.

Stray animals have taken a dramatic hit as the shortage of food has meant that they are left to starve on the streets.

The animals typically depend on street food to survive...

But with the lack of people and tourists out on the streets, there is no one providing them with any basic necessities.

This is why Turkish officials have been given a thoughtful task...

They are to go out into the streets on a regular basis and re-fill "food checkpoints" so that animals don't have to suffer during the pandemic.

The Daily Sabah reported that the task had been initiated by the Interior Ministry.

The IM had issued a letter stating their plans to provide aid to homeless people and animals during these uncertain periods.

The ministry said this:

"Food and water will be left at the living environments of street animals such as parks and gardens and particularly animal shelters."

They also emphasized that looking after animals in need is a core Turkish value.

And it is true. The people of Turkey don't just stop at feeding stray animals in the street, they also go as far as getting them vaccinated at local veterinaries as well making sure they are clean.

The minister also reiterated the country's plans during the lockdown.

Social distancing rules were outlined once again as well as the importance of remaining indoors using statistics from other European countries.

The news comes after cases in Turkey have risen to 61,000.

The death tolls have now reached over 1,000, so the government is doing all it can to make sure people are following the rules and regulations around social distancing.

During this pandemic, things can feel hopeless, but don't worry...

We have some heartwarming stories to keep you going. Keep scrolling to see how some celebrities are helping to brighten up your day...