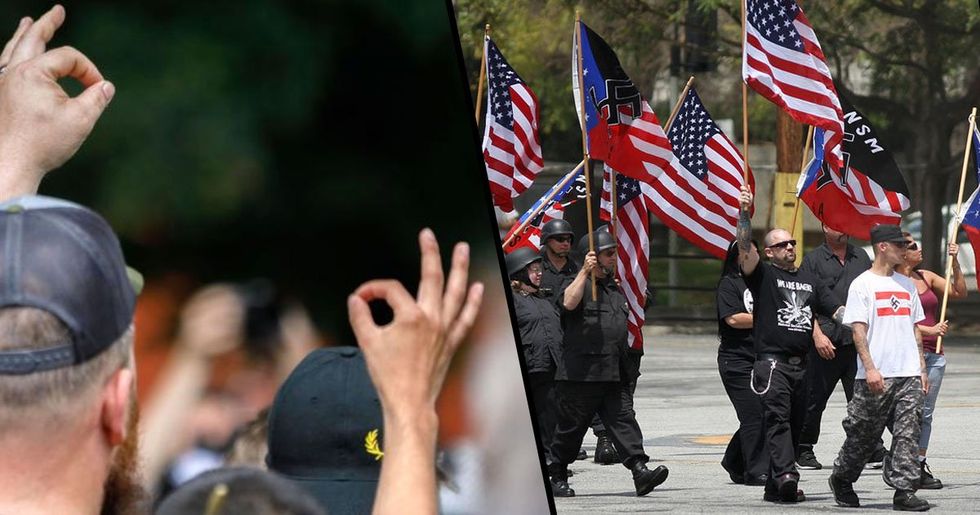 White supremacists love to take nice things and completely ruin them for us, don't they?

Well, in the most recent installment of "things that the alt-right have tainted for us," we have the "OK" hand sign, as it is now been considered as a hate symbol.

The Anti-Defamation League has officially added the sign to their ever-growing database of slogans and symbols that are used by extremists, and the internet cannot contain itself.

Keep scrolling to hear the full story, and to see peoples' excellent responses to this ridiculous story.

When you think of white supremacy...

Your mind automatically goes to the swastika or the Ku Klux Klan... Not this innocent hand sign.

But now, this sign has been gathered under the same, hateful umbrella.

Because it's just one more thing that white supremacists couldn't resist ruining for us.

It is a warped and twisted ideology.

White supremacy or white supremacism is the racist belief that white people are superior to people of other races, and therefore should be dominant over them.

They have tainted many things in their time...

Ranging from numbers to crosses, to arm gestures, and all the way to sayings, white supremacists have been set on spoiling a variety of things in the name of making them a symbol of their hate.

A quite baffling list of things has been approved as hate symbols in the ADL database...

Bowl cuts, boots, and laces apparently mean someone is a white supremacist, according to this website.

And the "OK" hand symbol is the latest victim.

A new report by the Anti-Defamation League has explained how this symbol, along with a number of others, have been added to their database of slogans and symbols used by extremists.

Traditionally, there is nothing offensive about the symbol.

The finger-and-thumb OK sign is universally known for meaning everything is all right or approval of something.

White supremacists have claimed the sign as their own.

The ADL says that, while not everyone means it to be hateful, the sign has been co-opted by the alt-right, and therefore none of us are allowed to use it anymore. Doesn't seem fair, does it?

It all started out as a hoax.

The "OK" hand gesture and its link to white nationalism began as a hoax cooked up by users of the website 4chan, who falsely linked it to white supremacy, according to the ADL.

And it was initially meant to bait the media or people with liberal ideals to overreact...

But in 2019, the sign was adopted by some white nationalists. "At least some white supremacists seem to have abandoned the ironic or satiric intent behind the original trolling campaign and used the symbol as a sincere expression of white supremacy," the ADL posted in its report.

Am I the only one who thinks this is all a bit ridiculous?

And, does anyone else agree that, by classifying this as one of their symbols, we are only giving them more power?

People are having none of it. Because why should they?!

Many people have pointed out how the symbol has been a universally positive thing for years, and how many famous figures (of all races) have been seen using it.

People have been pointing out how the symbol has been used by a variety of people over the years...

Including a whole load of NBA players. Yeah, don't want to mess with them, do you?

Though some think it could be one big NBA conspiracy...

I mean, it'd be better than an alt-right conspiracy, right?

Even Beyonce has used it.

So the Anti-Defamation league has now deemed the OK hand gesture as offensive as a symbol of white supremacy. Accor… https://t.co/K1IcYg4R7B
— ToHellandBack (@ToHellandBack)1569512762.0

Because that's just what they want, isn't it?

Some believe the whole thing has been overhyped.

I mean... It is overhyped... Want to see some more anti-supremacist Twitter reactions? So do I. Keep scrolling to see the time Neo-Nazi, Richard Spencer got punched in the face, and the amazing online reactions.