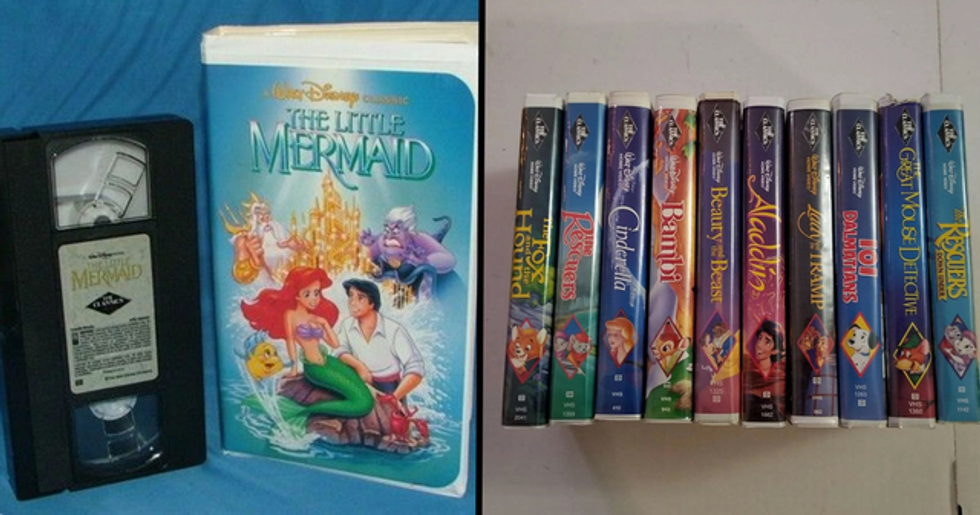 Your Old Disney Videotapes Could be Worth a Fortune On eBay

There are some items from our childhoods that we simply cannot bear to throw out. Whether it be a questionably-smelling teddybear, a disheveled barbie doll, or a comfort blanket that hasn't been washed in a decade, we all have an unexplained attachment to a childhood memento.

For many of us, that childhood memento is our Disney videotapes. Thanks to the internet, and Netflix, of course, killing the use of VHS, their main purpose is now to sit on a shelf collecting dust and we just can't seem to find a justifiable reason to part with them... Until now.

Did you know that some people are selling their old Disney videotapes for thousands of dollars? I'm not kidding, I promise. If there's one thing that will make people part with their nostalgic possessions, it is those sweet dollar bills.

Keeping scrolling to see just how much some of these videotapes can sell for, though be careful: This is an eye-watering read.

It's just a fact of life. Whether you're a child or a fully grown adult (guilty), you're never too old to get tucked up in bed and binge hours of Disney cartoons.

Disney has been entertaining us for decades.

The Disney Company, which would soon be renamed to Walt Disney Studios, was founded by brothers, Roy and Walt Disney in 1923, wherein the pair made their debut silent film, Alice's Wonderland.

Though Mickey Mouse quickly became the face of Disney.

Though the iconic mouse wasn't their first creation, Mickey Mouse instantly stole the show with the iconic film, Steamboat Willie, which was Disney's first sound film.

From the creation of the lovable mouse and the introduction of his girlfriend, Minnie, Disney went from strength to strength, eventually being recognized as a corporation, Walt Disney Productions, Limited.

Disney has slowly grown into an empire and has become the world's biggest media conglomerate. With numerous Disney theme parks spread across the States, Japan, China, and France, Disney has made its mark worldwide.

And it has certainly made its mark on our childhoods.

When we weren't begging our parents to take us to Disneyland, we were watching Disney cartoons... On our VHS players, obviously.

Snow White and the Seven Dwarfs was actually Disney's first feature-length animated movie, with its release in 1937 spurring the company to release more and more feature films.

Fast forward a couple of decades, more classics like Dumbo, Cinderella, Lady & The Tramp, Aladdin, and Mulan had all been released and, of course, had boomed in the box office.

These titles stole our hearts.

All over the world, children and adults alike were hooked.

And it has made it hard for us to part with our beloved videotapes.

Even though videotapes are rarely... Okay, never used anymore, many people have kept hold of their old Disney tapes, just for the nostalgia.

They're so valued that some have even become collector's items.

Certain copies of these videotapes have shot up in value in the last couple of years, with owners refusing to part with their beloved videotapes for nothing less than a small fortune. Don't really blame them, to be fair.

Some of you may be feeling some regret...

Did you flog your old copy of The Little Mermaid for a couple of bucks at a recent yard sale? Well, you might have made a grave mistake, my friend.

There are copies currently for sale on eBay...

For thousands of dollars. Are they cased in twenty-four-carat gold? Are they signed by Walt Disney himself? Have people completely lost their minds? Nope, though they do have something special about them...

They are Black Diamond editions.

Black Diamond editions of the videotapes each feature a black diamond logo on the spine and are considered valuable collectible items. Movies in the Black Diamond Collection were released between 1984 and 1994, and include titles like The Little Mermaid and Robin Hood.

And this set is selling for a ridiculous amount of money.

The set isn't in mint condition, though.

We have to give it to them, their honesty is admirable. The seller describes the boxset as "decent with some minor cracking and yellowing from age." They also add at the end that the items are "pre-owned with signs of use." Not quite what you'd expect for $16,000, is it?

Though this isn't the only set selling for an extortionate amount.

Take this copy of Beauty and the Beast - staggering $10,000 for just one videotape! The seller insists that it is a rare, collectible copy of the movie. That's making us think that the full set for $16,000 was a bargain...

However, some sellers are asking for significantly lower prices...

This seller is asking for a much more realistic price of $1,715 for their black diamond copy of Beauty and the Beast. Still a little out of my budget though...

Are your childhood tapes worth this extortionate fee?

Let's face it, we could all do with a couple of extra bucks. To find out if your copies are of any value, check whether they have the special edition "Classics" logo. This can be found along the spine of the cassette box, which will also have the black diamond symbol.

There may not be enough money in the world to make you give away your old Disney tapes for some of you more sentimental souls. I am not one of those people. Please excuse me while I go and ransack through my shelves for my old Disney videos... Don't have any tapes that are worth big bucks? Well, do you have any beanie babies? Read on to learn whether you have any teddies that could earn you a fortune!