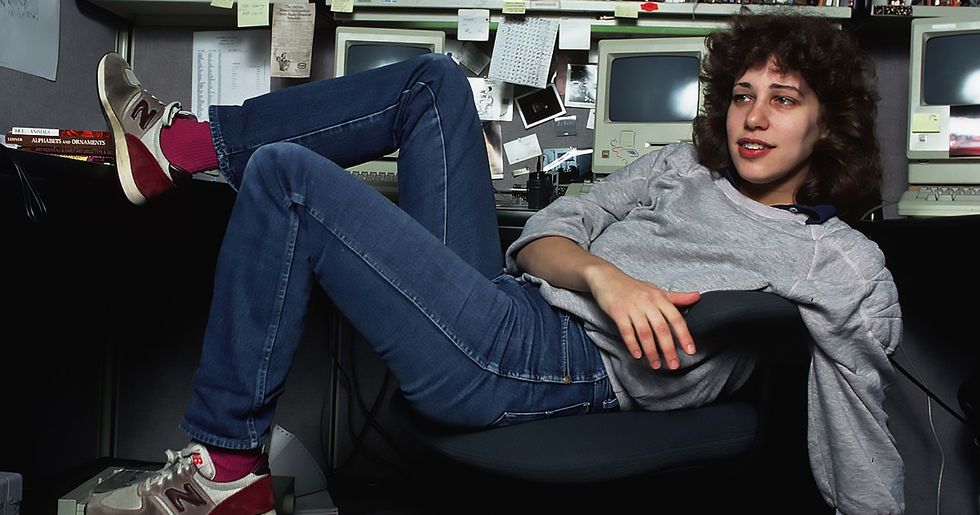 We don't necessarily think of our parents and grandparents as cool, but that's only because we know them as they are now, when everything they do is embarrassing. But in our parents' day, they were cool, and when we see pictures of them in their heyday, it's a clear example of old school cool.

Today, when our parents sport their dorky fashions, like tucking in their polo shirts or wearing brightly colored windbreakers, they look ridiculous. But if you put them in context, around other people with similar styles, they make sense. And if you add just a little bit of swagger? Then you've got a person looking old school cool.

We've collected some of the top posts from Reddit's Old School Cool forum. Check them out, and start smirking in your photos if you want to be considered old school cool in about 40 years.

I don't remember that day, was it peaceful?

This picture is so clearly old because news today doesn't offer these kinds of hopeful little bits of truth. Back in the day, cosmic events could make event the most hardened cynic feel hopeful.

Who needs a new car?

The headline for this Reddit post reads, "This 102-year-old man has driven the same Rolls Royce for 82 years — A 1928 Rolls Royce." It is undeniably cool, but it is too bad that this man never got to feel the joy of getting a new car.

And succeed he did.

This picture shows Brooklyn 99 star Terry Crews when he was voted Most Likely to Succeed in his 1986 school yearbook. Man, if you would've told me that windbreakers were ever cool, I would've called you an idiot. But just look at this fly windbreaker. Gotdamn.

What's so cool about this picture of a North Dakota blizzard in 1966 is how little this man cares that the snow is so high because he had so much work to do. Stoicism is so cool.

Hello from the past!

This Redditor's grandfather made short films, and in this shot, took the time to wave to his future descendants. It feels like this man is opening a portal to the past, and having power over time is undeniably cool.

No man has ever made us more wet.

From that boxy haircut to those round glasses, this picture of Lonnie Johnson would've cleared the Old School Cool bar even if he wasn't holding a Super Soaker, one of the all-time best-selling toys and one that he himself invented.

It was her idea to have a bite taken out of the apple.

This is Susan Kare, who did design for Apple, NeXT, IBM, and Microsoft. To me, it's her Apple work that's so impressive. To get Steve Jobs, a notoriously over-bearing and fussy aesthete, to sign off on anything artistic is a huge accomplishment. Fly sneakers, too.

The headline to this post read, "My dad doing his best to celebrate my 2nd birthday in 1995, when it was just the two of us for a while" and is, officially, the sweetest image on the internet.

Mix 'em and cook 'em in a pot like gumbo.

"Me and the homies before going to see Straight Outta Compton," read the headline to this post. It went on to clarify, "The tour, not the movie." There are more sweaters than I would've guessed.

Smart and funny: together, they are the perfect Tinder match.

This cool image of Albert Einstein and Charlie Chaplin is made even cooler by the story of their conversation, as relayed by Redditor bittybambi: "In 1931, Einstein said, 'What I admire most about your art is its universality. You do not say a word, and yet the world understands you.' 'It's true.' Replied Chaplin, 'But your fame is even greater. The world admires you, when no one understands you.'"

I've never loved a person or a bicycle this much.

51 years later, this couple recreated a treasured photo, sitting on the exact same bike. The guy looks equally confident and cool in both pictures, but the lady is definitely more worried about falling off in the newer version.

I'm ready to say it: photobooths are better than cameras.

This Reddit post's headline read, "My son and I in the early 90s. We couldn‘t afford a camera, so we periodically went into a photobooth." But this is so much cooler than a single photo. Seeing their faces change over just those brief seconds between snaps tells us so much more about the subject's personality.

While this old photo of a ballerina is no more or less cool than any old photo of a ballerina, the story of this particular ballerina is undeniably astounding: "Franceska Mann arrived at Auschwitz in 1943. When ordered to strip, she did so provocatively, distracting the guards. She grabbed the roll call officers gun and shot him dead, then wounded one more before other prisoners joined her rebellion, before all being shot dead."

The confidence in the shirt-and-shorts combo is cool, but this photo of a Redditor recreating his father's greatest accomplishment — perfectly lining up a beer can with the steps of a ziggurat — pushes it over the edge.

There is no step three.

"My physics teacher retires today, here he is day 1 on the job 30 years ago," read the headline to this Reddit post. There are two important elements to this photo — the smiling teacher and the aggressive message on the blackboard. The juxtaposition is what makes this photo cool, as opposed to benign (if the message was as happy as the teacher) or upsetting (if the teacher looked as aggressive as the message).

Just a bunch of knuckleheads.

"My grandpa worked as a park ranger in Yellowstone, where he took this photo of The Three Stooges when they visited. 1969." This Redditor's grandpa caught a snapshot of The Three Stooges when they visited Yellowstone while he was a park ranger. They proceeded to slap each other and poke each other in the eyes in what was then considered a "comedy routine" and would today be considered "abuse."

This photo captures, as the Redditor put it, a "lost in the moment at a school dance" from the 1950s. My guess is that this is a sock hop, and this boy did not think he was going to be asked to go and is just so stoked to be there. Either that or he's so nervous he just crapped himself. But definitely one or the other.

This photo of WWE legend The Undertaker with his decidedly normal grandmother is off-putting, to say the least. Doesn't she care that he killed her son or daughter and carries their ashes around in an urn that gives him supernatural powers and therefore an unfair advantage in the wrestling ring?

The best power moves empower others.

This post read: "In the 1950s, Ella Fitzgerald was not allowed to play Hollywood's most popular nightclub, Mocambo, because of her race. Marilyn Monroe, who was a big fan, called the owner and told him that if he booked Ella, Marilyn would be there every night — which guaranteed huge press coverage. He booked Ella and Marilyn was there, front table, every night. Ella said, 'After that, I never had to play a small jazz club again. She was an unusual woman — a little ahead of her times. And she didn't know it."

Your Christmas present is in another castle.

Saying, "the Nintendo was a present for 'me and my sister,'" this Redditor posted a picture of his dad beating Super Mario Bros. in 1988 on a rad wooden TV while wearing some fly-looking white pants.

"Phil Collins in the 70s looks like he would be the hottest indie hip hop artist in 2018" read the headline of this Reddit post, and it's hard to argue. I'd download Phil Collins' mixtape for sure.

This picture of a trio of ladies rollerskating through California in 1979 looks like a Haim video.

We got a real-life Don Draper over here.

This Redditor's grandpa, who is 90 today, took this picture in the '50s looking sexy as hell. Honestly, I don't care what he looks like today. I still would.

"He’s impersonating his 19-year-old self in Vietnam 1966," says this Redditor. We've gotta say — moving from cigarettes to oatmeal creme pies should make him seem less cool. And yet, he's confident in the choice, and we can't help but respect him even more.

You got the super ball in this one.

I wonder if he ever got some satisfaction?

Look, Mick Jagger is the definition of old school cool, but this is another one where the story behind the picture makes it extra cool: "My mom would always talk about how she was an editor for Tiger Beat magazine when she was a teenager in the 1960’s. She would brag about spending time with the Stones and the Beatles. We always thought she was telling tall tales. Uncovered this pic cleaning out her house last week."

Is this what the movie Yesterday was about?

This Reddit post reads, "In 1964, a group of high school kids skipped class to go see The Beatles. They didn't get into the concert but while they were driving Ringo pulled beside them and snapped their picture. When they told their friends no one believed them. Fast forward 50 years and Ringo publishes a book of his photographs. They were in it. They reposed the shot as they look today."

This shot of a Redditor's dad working at NASA in 1986 is a) cool as hell, and b) a monument to minimalism. All this man needs is a few sheets of paper and some highlighters and he can get his work done.

Everyone seems to be having a great time?

Look at this cool baby. Not a lot of people, let alone babies, can pull off the tucked-in polo/ over-sized sunglasses combo. What's especially intimidating about this cool baby is that he has so many years of being cool ahead of him.