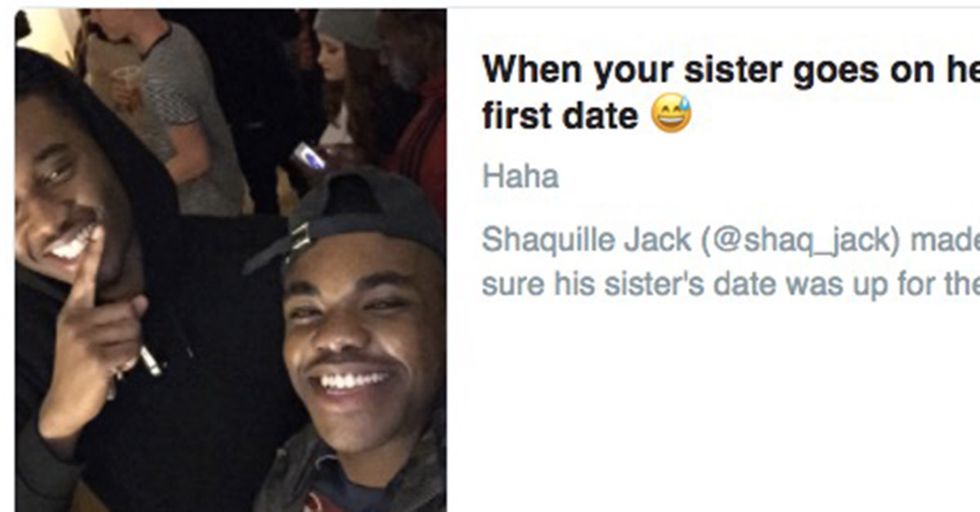 If you grew up with a younger sibling, you know how much fun it is to embarrass your younger brother or sister. Or maybe you are the younger sibling, and you know the feeling of being embarrassed. Regardless, nothing you've felt is quite equal to what this girl experienced at the hand of her older brother when she was about to head out on a date.

This is Shaquille Jack.

Also known as "Shaq Jack," which we can all agree is an awesome nickname. Other than the sweet nickname, though, he's basically your average, fun-loving 20-something-year-old...except he might be a little bit extra protective of his sister.

And like most attractive women of a certain age, she gets asked out on many dates. That's exactly what happened before the events of today's story.

When Rochelle was about to head out with her date, Shaq took a moment to make sure that the date was a good guy.

He recorded an absolutely hilarious video of himself "interrogating" Rochelle's potential date, Owen. Poor Owen. Poor Rochelle. They just wanted to go on a date!

He started off by asking pretty Owen typical questions, but he got funnier as the interrogation continued.

He asked whether Owen was planning on paying for the date, or if he was "going Dutch." Rochelle insisted that she was an independent woman who could pay for herself, but Owen pointed out that, as he'd been working, he'd be happy to pay for the date. The interrogation only got more ridiculous from there.

At the very end of the video, you can hear Shaq comment, "they grow up so fast."

The video had the Internet rolling. It already has over 25,000 retweets.

Even if the interrogation was done partially as a joke, you could tell he wanted to make sure Owen was a decent guy.

But everyone seems to agree that Owen passed the test and showed he has what it takes.

Meeting a date's older brother is definitely a very weird and nerve-wracking situation to suddenly find yourself in. Owen seemed pretty unfazed, though.

Major props to Owen for keeping calm and having grace under pressure.

Most teenagers probably wouldn't have handled the situation as well as he did, but he managed to stay as cool as a cucumber throughout Shaq Jack's interrogation.

Owen started to become a fan favorite among Shaq's followers.

Unfortunately for this woman, it looks like Owen is off the market. We hope she has an older brother like Shaq who's willing to vet her next date!

Owen did so well that many started to wonder whether there would be another date for he and Rochelle.

Shaq certainly approved of the idea. It was then up to Rochelle to determine whether Owen was worthy...

Good news! Not only was there another date, Shaq posted an even funnier update video.

He asked Owen a few questions about their first date. Then he asked if there might be another date in their future.

The answer was yes! Good thing, too. Especially now that he has the official Older Brother Seal of Approval.

Naturally, that had the Internet rolling. Obviously, people were glad to see that things worked out for all parties.

Even Rochelle chimed in on the embarrassing (but cute!) situation.

She may not ever live it down, but at least she and Owen share a unique bond. The whole Internet is rooting for them to work out.

Most of us with younger siblings dread the idea of them being old enough to date.

But if we can all pull a page from Shaq Jack's book, we might be a little better off. Future dates: be prepared! The interrogations are coming.