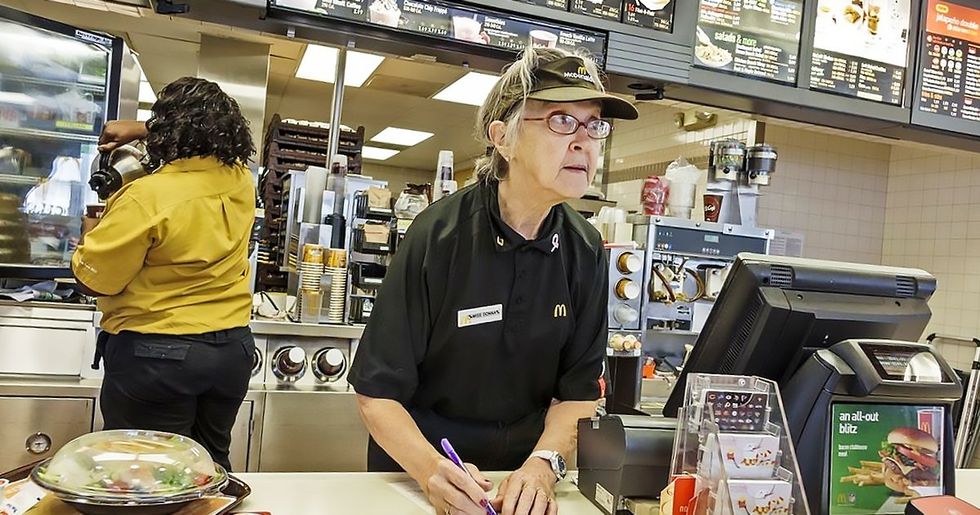 Most of us can remember our first job - a likely unglamorous part-time gig where we made just enough to save up for a cool new bike, or a shopping splurge at the mall with our friends after school. The first job I ever worked was washing hair at my aunt's hair salon. I was the "shampoo girl" and lit up every time someone dropped a dollar into my little styrofoam tip cup. After that, I worked at the local bakery, waking up for a six a.m. shift on Saturdays, while my friends snoozed away late into the afternoon.

Jobs for teens are good. They can teach someone how to be punctual, how to have a work ethic and give a teen the satisfying feeling of earning your very own paycheck. I'm so grateful that I had a job at 13-years-old: it set me on a path of never taking jobs for granted, no matter how hard or menial they were.

But here's an interesting fact: Bloomberg recently reported that fast food chains and franchises are hiring senior citizens more and more frequently, preferring the older demographic instead of employing teens to manage the fryer or work the cashier. Scroll to find out why.

The trope of a disgruntled teen working at a fast food joint has been around for a long time.

If you were a '90s baby, then you probably watched Good Burger so many times you broke your orange VHS.

Okay, but for real - that movie was the best.

And it made me want to work at a burger place more than anything. Kenan and Kel were teen comedic forces. If you haven't seen this movie, you need to ASAP.

There was also Matt Saracen from 'Friday Night Lights.'

The sweet, quiet football player worked at the Alamo Freeze during high school whilst taking care of his grandmother. Matt Saracen > Tim Riggins, every dang day.

Or how about Laney Boggs?

Lest we forget that she worked at a fast food joint and sported a truly wild falafel hat? As if that silly uniform could mask how beautiful Rachael Leigh Cook is. Uh, yeah right.

Fast food is also such a deep part of our society.

Even if you're a health fanatic, you can't deny the convenience of fast food. When you're running late during your lunch break, sometimes there's nothing better than swinging by Subway for a foot long sub.

There are so many fast food chains that everyone has their own, personal favorite place to eat.

But there are certain fast food joints that are the biggest chains in America. Out of all the franchises that exist here, there a few that stand out from the pack.

Would you believe that Subway is the biggest fast food chain in America?

Datafiniti took data from across the U.S. to find out and rank fast food restaurants with the most locations, nationally.

Subway - somewhat shockingly - beats out McDonald's for the franchise with the most locations.

The sandwich spot makes up 18.5% of all fast food joints in America. Listen, I will always prefer to eat a cold cut trio foot long than pretty much...anything else.

McDonald's and Burger King fill out the 2nd and 3rd spots on the ranking list.

Which absolutely makes sense. You can tell just by driving down the street and seeing at least a few McDonald's and Burger Kings that these franchises dominate the U.S.

Can you guess which fast food joint came in at #4?

It's Taco Bell! Hot tip: there is nothing better than going through the Taco Bell drive-thru late at night after hanging out with your friends. Nothing.

A bunch of familiar franchises make up the rest of the top 20 fast food joints with the most locations.

Among them are faves like Chick-Fil-A, Wendy's, Sonic and Five Guys. Is anybody else getting hungry just thinking about these menus?

Fast food has always been popular, but thanks to social media, fast food accounts have taken on a life of their own.

Fast food twitter accounts are worse than Regina George! The amount of shade they throw is impressive.

Running a social media account for a major franchise is a dream job. They have so much fun.

Why do I ship this? Why do I stan fast food restaurants? I cannot handle.

This tweet is as cold as it gets. Wendy's is savage!

But Burger King always comes through with the shade as well.

You can feel the tension through the computer screen.

They even made their own gif. They are next level.

Taco Bell has no time for Old Spice's subtweeting.

Taco Bell was not about to have Old Spice drag them on a public platform. Shots fired.

Who knew Taco Bell was so hip with pop culture references?

Clearly, there are some sassy millenials in charge of the social media accounts for these companies.

But what about the other jobs at these fast food restaurants? Well, it seems that fast food franchises are leaning toward hiring senior citizens and older folks as opposed to teenagers, Bloomberg reports.

There are a lot of reasons that fast food franchises would prefer to employ senior citizens.

Why would these companies prefer to hire older folks instead of teens?

Bloomberg points out that senior citizens often have skills that teens seem to lack nowadays: being on time and friendly communication with customers.

Many folks who have retired find themselves bored, wanting to work to simply make extra money or get out of the house.

63-year-old Stevenson Williams is a retired construction worker and manages a Church's Chicken in South Carolina. "It's fun for a while, not getting up, not having to punch a clock, not having to get out of bed and grind every day," he told Bloomberg. "But after working all your life, sitting around got old. There's only so many trips to Walmart you can take. I just enjoy Church's Chicken. I enjoy the atmosphere, I enjoy the people."

Hiring senior citizens means they get employees with a ton of life and work experience, but they can still pay them minimum wage. These folks are also likely to not want to be promoted. James Gray from Calibrate Coaching told Bloomberg that older folks aren't "necessarily looking for a VP or an executive position or looking to make a ton of money."

Williams will often give advice to his younger coworkers at Church's Chicken.

"A lot of times with the younger kids now, they can be very disrespectful," he explained. "So you have to coach them and tell them this is your job."

The trend for senior citizens to work at fast food chains is growing.

67-year-old former teacher Toni Vartanian-Heifner works at a Honey Baked Ham restaurant in Missouri for the social aspect of it, despite making only about $10 an hour. "I enjoy the social part of it," she says. "I think I’m going to work for at least five more years."

"There’s nothing wrong with kids, but it just seems that nowadays…the whole millennial thing, there's very few of them that have good work ethics," she explained. "I love my little senior citizen, June, that works here. Customers love her…it’s just better to get older people with more experience. They’re on time. They’re friendlier…and they’re not on their cell phone all the time."

June Cove Boyd, Hayes' employee, decided to go back to work to help her work through the sadness of losing loved ones.

"I immediately went back to work in the food industry and customer service…depression for older people sets in. That’s why more of people my age are going back to work," Cove Boyd told KOAA News 5. It'll be interesting to see how hiring statistics change in the coming years as franchises hire more and more senior citizens and fewer teens. If you're a teen looking for a summer job, here's a tip: don't text while working.