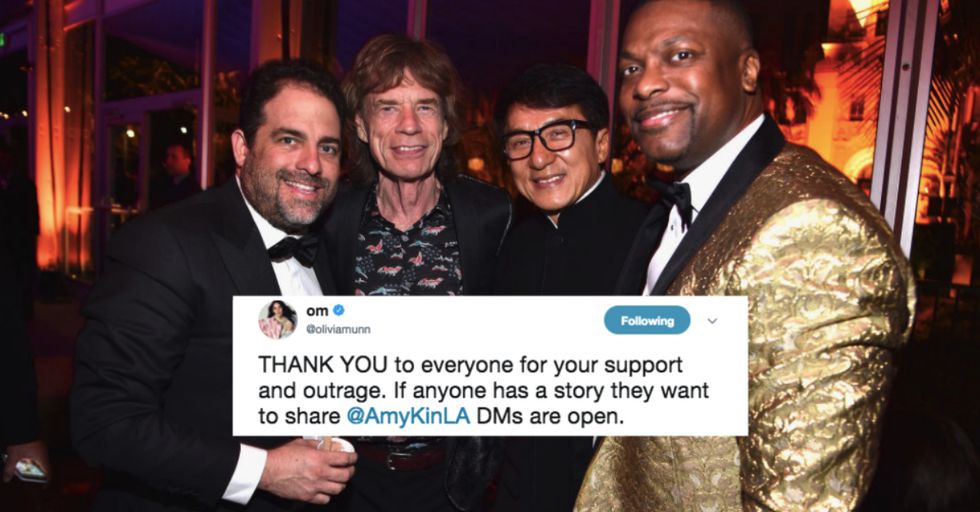 These days, it seems we're literally inundated with accusations of sexual assault. Everywhere we turn, another public figure is being accused of sexual assault, and usually, it's not by just one woman. No, it's six or seven or sixty, or hundreds – many of them usually public figures themselves with enough wealth and clout that no one can doubt that these men couldn't have done what they're accused of doing.

It seems that the floodgates are finally open, and women feel comfortable and supported enough to name and shame their assaulters with the hopes that this will lead to more punitive measures.

Ratner is the director behind the Rush Hour film series and X-men: The Last Stand.  His production company, Ratpac-Dune Entertainment produced the Oscar winning movie The Revenant, along with Horrible Bosses and the Snow White remake Mirror Mirror.

Jeremy Piven, you may remember from the HBO show "Entourage" where he played high-powered agent Ari Gold.

Piven has also acted in a number of blockbusters including Grosse Pointe Blank, Black Hawk Down, and Smokin' Aces.

Ratner was accused by six women including actresses Olivia Munn and Natasha Henstridge.

Henstridge, who you may remember as Sil, the titular alien from the movie Species, or Dawn Chamberlain from the TV show The Secret Circle told the L.A. Times that the director forced her to give him oral sex after she'd gone to his New York apartment for a small viewing party with friends. When she woke up, her friends were gone and Ratner blocked the doorway and began touching himself. Then he forced her to give him oral sex. “He strong-armed me in a real way. He physically forced himself on me," Henstridge said to the L.A. Times. “At some point, I gave in and he did his thing."

Munn met Ratner on the set of "After the Sunset" in 2004, when she was an aspiring actress.

Even worse, when Ratner met her at a Creative Artists Agency party years later, he told her that he'd he'd ejaculated to magazine covers of her. At least two people overheard the interaction and corroborated it.

This horrific interaction, and the rumors Ratner persistently spread about being intimate with her forced Munn to come forward. “I’ve made specific, conscientious choices not to work with Brett Ratner," Munn said. “It feels as if I keep going up against the same bully at school who just won't quit. You just hope that enough people believe the truth and for enough time to pass so that you can't be connected to him anymore." But that's not even the worst part...

Ratner denied the charges through his lawyer.

Ratner's attorney Martin Singer sent a 10-page letter to the Times denying the claim. “I have represented Mr. Ratner for two decades, and no woman has ever made a claim against him for sexual misconduct or sexual harassment," Singer wrote. “Furthermore, no woman has ever requested or received any financial settlement from my client."

And yet, the other four women, all of them also actresses, had similar claims.

One actress, Jaime Ray Newman of Netflix's The Punisher said he propositioned her when they both met in first class of on an Air Canada flight. He switched seats with an assistant so he could be beside her, then showed her nude pictures of his then-girlfriend while “...graphically describing giving me oral sex and how he was addicted to it." Another actress claimed he followed her into a bathroom after she'd refused to be intimate with him. Other actresses accused him of asking to touch their breasts or asking them to touch his penis.

While many people praised Ratner for being a family man, he himself admits that he keeps questionable company.

In fact, Ratner once told Variety magazine that James Toback, who has been accused of assaulting over 300 women, and Roman Polanski, who drugged and raped a 13-year old girl and was convicted of it, were among his “closest friends." Birds of a feather?

Piven, for his part, has been accused of repeated sexual assault by actress Ariane Bellamar.

#HAPPYHALLOWEEN! This year I’m going as ‘the hoe that deserved to be sexually assaulted ‘cause she showed her cleav… https://t.co/UxehztZsgT
— Ariane Bellamar (@Ariane Bellamar)1509450064.0

In a series of tweets, Bellamar called out Piven for forcibly fondling her breasts and rear end both on the set of Entourage and at the Playboy Mansion.

Hey @jeremypiven! ‘Member when you cornered me in your trailer on the #Entourage set? ‘Member grabbing my boobies on the ? without asking??

‘Member when I tried to leave; you grabbed me by the ass, looked at yourself in the mirror, & said what a ‘beautiful couple’ we made? #MeToo https://t.co/liD7irs0o0

Jeremy Piven, on two occasions, cornered me & forcefully fondled my breasts & bum. Once at the mansion & once on set. #MeToo @AriMelber @CNN https://t.co/liD7irs0o0

He also sent her explicit messages, which, as she notes, are documented.

At this point, it might be a forgone conclusion, but it's also worth repeating again: Also, don't expose yourself to people who don't want to view you in all your naked glory. You might think it's hot, but trust us, it's really not. Consent. It's a thing.