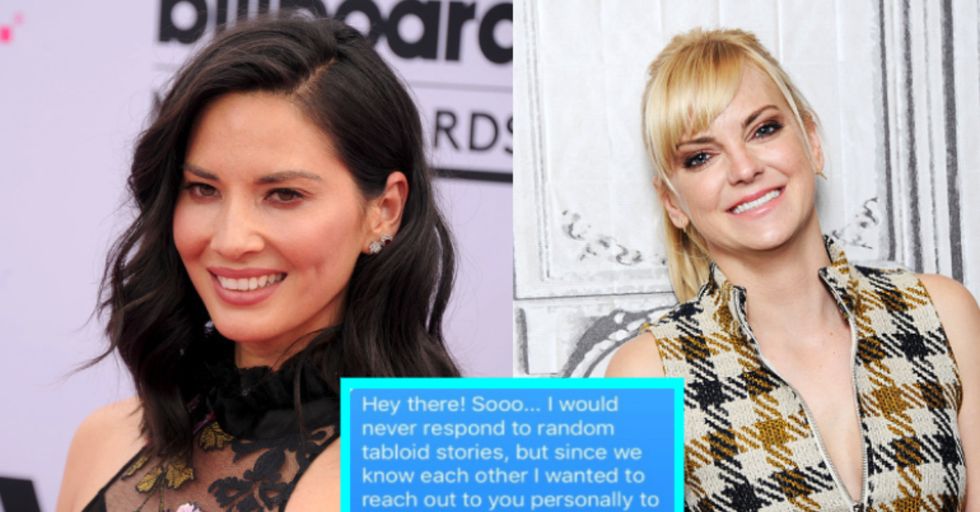 If there's one thing we've all learned over the past year, it's that women are more powerful than society tends to give them credit for. Throughout 2017 and the beginning of 2018, we've repeatedly seen women standing up for themselves and for each other, and working together to make this world better for everyone.

This past weekend — a weekend marked with renewed discussions around the empowerment of women — actresses Olivia Munn and Anna Faris had a refreshingly honest conversation that continues to give us all hope for the future.

For those who aren't constantly on top of all the celebrity relationship gossip, actress Olivia Munn is now single.

Munn had been dating Green Bay Packers quarterback Aaron Rodgers since 2014, but the couple split up last spring.

And you'll no doubt remember that last summer, Chris Pratt and Anna Faris decided to separate after 8 years of marriage.

It was a celebrity breakup that hit us all a little bit harder than we'd like to admit, but both parties seem to have done a great job of working together to make the transition as easy as possible on their son Jack. Of course, any time there's a breakup in Hollywood, rumors abound.

Over the weekend, Entertainment Tonight reported that Chris Pratt and Olivia Munn were dating.

And people kind of freaked out. Obviously, Pratt and Munn are two single adults who can choose to date (or not date!) anyone they want to, but still. Celebrities. Relationships. Gossip. You get it. Those who keep their fingers on the pulse of which celebs are dating were thrown into a bit of a tizzy. Are Munn and Pratt actually dating? And if so, how does Faris (who, by the way, appears to have her own boyfriend) feel about it?

But the dating rumors were short-lived. Munn soon took to Twitter to address them directly.

In her tweet, she made it clear that she is not dating Chriss Pratt (although, again, she's a grown adult and can do whatever she wants with her life). She also made a few other things very clear: First, not every single woman feels scorned and upset after a breakup. Sometimes the breakup — while still sad — is a mutually agreed upon decision made by two people who think ending the relationship is the best thing for both of them. Adults can make these difficult decisions together without toxic feelings on either side. Weird, right? Second, as Munn points out, not every woman is "furious" at another woman for dating her ex. Not all of us are stuck in high school drama. Third, tabloids and gossip hounds trying to stir up drama between Munn and Faris are pretty out of line.

Fourth, women tend to respect each other more than some people think (but we all knew that one already, right?). Fifth and finally, Munn thinks that if she and Pratt were dating, they'd have a terrible celebrity name. Olipratt. Yeah, we definitely can't argue with that one. But then Munn went one step further and posted a screenshot of an actual text convo she and Faris had about the rumors...

Munn decided to text Faris and let her know directly that the tabloids were totally wrong with their speculations.

"I'm sure you already know it's not true, or maybe didn't care either way, but I just wanted to reach out personally to tell you it's not true," she said. Faris' response is equally classy. She acknowledges that Hollywood is a crazy town where unfounded rumors tend to spread without any regard for whether they're actually based in reality. She also says that she'd be thrilled if Munn became her new "sister-in-law."

The Internet has been super impressed by the whole interaction.

There's no bitterness or blindsiding; just openness and honesty on both sides. It's actually pretty dang awesome.

And the fact that Anna Faris is ready to welcome a new "sister-in-law" into the family if and when Pratt decides to start dating again is also pretty wonderful. It's clear that she's once again making her son's happiness a top priority.
Hooray for women who discuss things like adults without letting petty nonsense break up their friendship! We should all want this to be the norm.

And here's the thing — it totally can be! There's no reason we can't all be this classy. This year has been all about changing the way society thinks about women. This is just one of the most recent examples of how that's already becoming a reality.