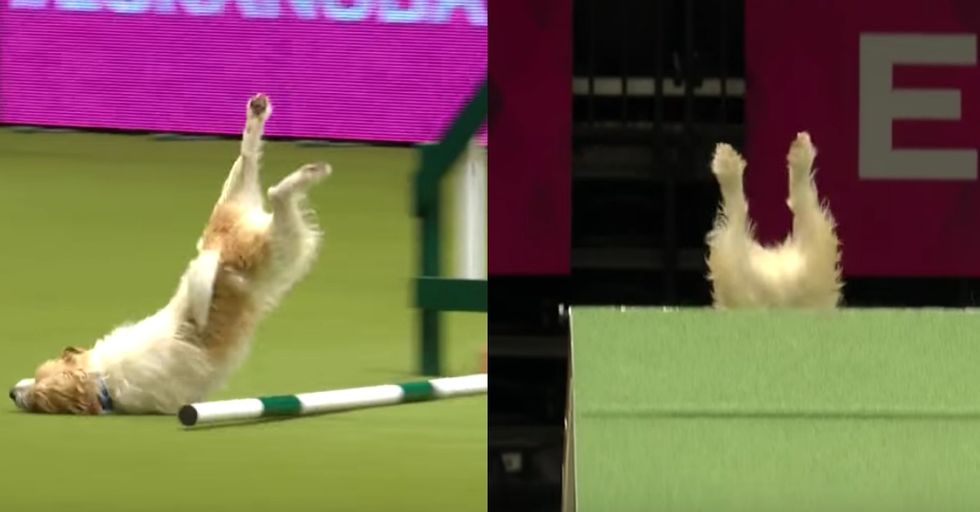 Jack Russell terriers are known for being pretty energetic, and Olly is no exception.

He was attempting to complete the agility course at Crufts 2017, but after face-planting on the opening bar, things completely went off the rails.

I don't think it's possible to have a spokes-dog, but if it was, he would be Jack Russell Terriers' worldwide PR dog.

But what makes him so much more special and deserving of attention than other dogs?

Well, there is SOMETHING.

You see, he recently made waves on the competitive dog show circuit.

His story's one of (adorable) failure that instantly endeared him to the entire Internet. Check out the dubious and amazingly cute performance on the next page.

The little furry dude doesn't seem to mind taking an unconventional route through the course though, and the announcer can barely contain himself.

Olly is clearly loving every moment of the course, and thanks to this hilarious video, so will you.

It may not have been the most athletic performance.

But many found it BY FAR to be the most relatable.

The reactions, as you might imagine, came in fast and furious.

Also, he served to bring some much-needed levity to the stuffy world of dog shows.

The story made the rounds most everywhere.

There was clearly no shortage of good screenshots used to entice people to watch the clip. They're all amazing. As you can see by the reactions, his fame lasted a bit longer than the dog show. In fact, he's never been MORE popular.

His account ensures that people can swing by and visit him far more often than they could be reliving the dog show low-lights.

Like any aspirational pup, he's using his good fortune to travel the world.

Maybe he'll be stopping through your neck of the woods! Stay current on his Twitter to know!

The fame may have gone to his head a LITTLE.

It would appear that he has assembled an entourage since the event ended. P Diddy would be proud.

Oh, and in case you think that his weak dog show performance has discouraged him...not a chance.

He's still out there doing his best and training like Rocky!

Congrats on your viral fame, Olly.

Other dogs may deserve it more, but it's all yours nonetheless. So keep being cute for our sake, and don't be shy about posting on Twitter.