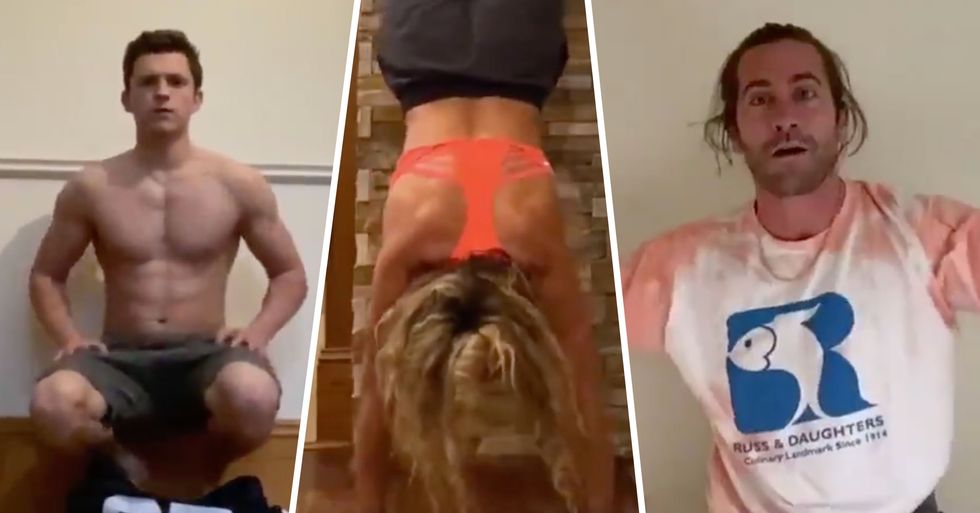 While killing time in self-isolation, Tom Holland challenged his fellow Marvel co-stars, Jake Gyllenhaal and Ryan Reynolds to do shirtless handstands - And boy, did they deliver. But what they weren't expecting was a US olympian to come onto the scene and beat them at their own game...

Keep scrolling to see who could have possibly beaten Spider-Man at his own challenge...

The actor reportedly stood out during the lengthy 5-month audition period...

Because Holland's portrayal of Spider-Man has been a roaring success.

He has now starred in 5 different movies as Spider Man...

People simply can't get enough of the actor, and millions follow him across all social media platforms.

And regularly shares aspects of his life with his 34 million-strong Instagram following.

So, obviously, his quarantine antics have been welcomed with open arms.

As a result of the ongoing medical pandemic, the majority of the world is currently sitting in self-isolation, and celebrities are faring no differently.

At first, he went out and bought 3 chickens to combat the supermarket's dwindling supply of eggs.

But then, he decided to take part in a viral challenge.

Because all the other celebrities are doing them, obviously. The latest challenge to circulate the internet is to do a handstand while shirtless and attempt to put your shirt back on while still in the handstand.

And, upon his rather impressive completion, he then nominated 3 of his pals... Jake Gyllenhaal, Ryan Reynolds, and Harrison Osterfield.

And posted his own video of him attempting the challenge.

And he successfully pulled on his shirt while in the handstand position. Ten out of ten for effort.

As for Ryan Reynolds?

Well, Ryan has never been on to do things by the book, has he?

We all wondered whether the Deadpool star would deliver...

And he did in the only way he knows best - By doing the exact opposite of what was asked of him.

Reynolds responded by sharing a video of himself looking rather confusedly at the camera...

He stares in silence for a few moments, before responding with, "no?" and a shake of his head.

Of course Deadpool was never going to take orders from Spiderman.

But now, a US olympian has beat both Tom and Jake at their own challenge.

If there's anyone that could beat Spider-Man, of course, it would be a member of the United States Olympic team.

Posting the video on her Twitter, she decided to try the workout for herself, writing, "[it] can't be that hard."

She continued in the hilarious caption:

"When I saw Spider-Man and Jake Gyllenhaal do a handstand challenge with one shirt... First I want to thank them for having their shirt off because I haven’t seen a man in 25 days and also..."

And you know what? She really delivered with this one.

Check her out with the glass of wine at the end! Incredible.

And the comment section literally blew up with praise for the olympian.

It was well deserved to be honest.

She really did show them who's boss...

@lolojones My girl here just shamed two fine men and with panache! I salute you in every possible way!😂
— sara random (@sara random)1586063628.0

And if you're looking to see how other celebrities are spending their time in quarantine, then keep scrolling...