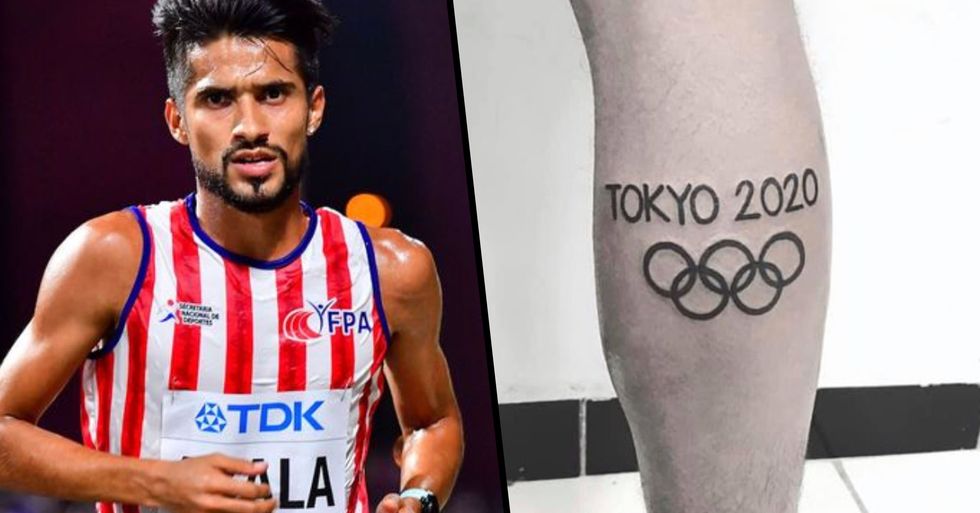 Olympic Athlete Pleads for Tattooists to Change His 'Tokyo 2020' Ink

An Olympic athlete who had qualified to compete in the 2020 Tokyo Olympic Games decided to get a tattoo dedicated to the upcoming event.

But, now that the Games have been pushed back to 2021, he has been left in a slight predicament with his fresh ink.

Keep scrolling for the full story, and to see his tattoo blunder for yourself...

The COVID-19 pandemic has brought the world to a complete standstill.

In an attempt to prevent the spread of the virus, which has so far infected 550,530 people globally, many major countries have gone into full lockdown.

Due to the highly contagious nature of the virus, quarantine has been dubbed as the most effective method of preventing any further contamination...

So, now, millions of people are in self-isolation.

Many major events and large social gatherings have had to be canceled or postponed.

Music festivals all over the world have been affected.

Including the infamous Coachella, which will now take place in October.

Many major sporting events have also taken a hit.

The English Premier League have postponed all football matches indefinitely, as have the NBA, who have suspended all basketball games until March.

But the most shocking cancelation of them all has been the Olympics.

The highly anticipated Olympic Games takes place once every 4 years in different major cities across the world.

2016's Olympic Games were hosted in the vibrant city of Rio De Janeiro...

And this year, it was Japan's turn to host the prestigious sporting event.

The anticipation for Tokyo 2020 has been high...

Japan's capital has successfully hosted the Olympics on 2 other occasions, so people have been incredibly excited for a long summer of sporting events.

However, the coronavirus outbreak distilled fear in fans of the games early on.

With the virus originating in Asia, many feared that Tokyo 2020 would be badly affected.

And, sadly, their fears were correct.

With all large social gatherings and sporting events being hastily canceled, officials behind the games decided to postpone the event by one whole year.

The event, due to begin on 24 July, will now take place "no later than summer 2021." In a joint statement, the organizers of Tokyo 2020 and the IOC said: "The unprecedented and unpredictable spread of the outbreak has seen the situation in the rest of the world deteriorating... The IOC president and the prime minister of Japan have concluded that the Games of the XXXII Olympiad in Tokyo must be rescheduled to a date beyond 2020 but not later than summer 2021, to safeguard the health of the athletes, everybody involved in the Olympic Games and the international community."

Understandably, many people have been left completely devastated by the decision...

Millions of people all over the world were gearing up for a summer of sports, and everyone involved in the preparations in Japan have been left incredibly disappointed.

But it is the athletes who have been hit the hardest with the news.

Thousands of athletes who had qualified to take part in the games have been left heartbroken by the delay, with many finding their intensive training schedules disrupted by the move.

For any athlete, taking part in the Olympic Games is a huge deal...

And for one man, this decision has affected him in more ways than others.

Paraguayan long-distance runner, Derlis Ayala, was one of the many athletes to qualify for Tokyo 2020.

The thirty-year-old also competed in the 2016 Games, where he finished in the 136th position.

Derlis was incredibly excited about his trip to Japan...

So much so that he decided to get a tattoo dedicated to his up and coming trip.

The athlete had "Tokyo 2020" inked across his calf in September last year to commemorate qualifying.

Along with the Olympic Games logo. A fitting tribute to his achievement, right?

Well, his tattoo has now been completely ruined by the delay...

And he has now taken to social media to beg any tattoo artist to help him fix his tattoo blunder.

He uploaded a photo of his ink to social media with the caption, "Can someone help me put 2021? When I got it done they told me... and if it changes city..."

Social media users have suggested he could try 2020+1, use the '0' to write 0ne, or just to tell others that he has a unique tattoo.

But Derlis may just be in luck.

Despite the event being postponed, officials have confirmed that the event will still be called "Tokyo 2020", despite taking place in 2o21. Thank goodness for that! For more updates on the COVID-19 pandemic, keep scrolling to hear which celebrities have been diagnosed with the virus...