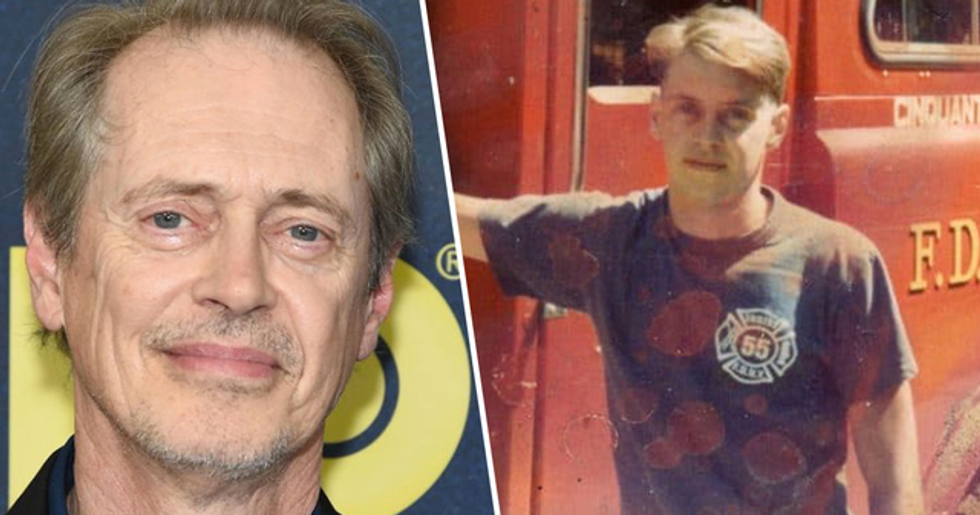 On 9/11, Steve Buscemi Returned to Job as Firefighter to Help Find Victims

Today marks eighteen years since the devastating attacks, and the reality of the events from that fateful day is still sinking in for many New Yorkers. Today is a day in which we remember those lost in the attacks, but also those who helped to scour the rubble for survivors in the initial aftermath and clean-up operation.

And one story which resurfaces every year is that of Hollywood actor, Steve Buscemi, who returned to his old job as a firefighter to work grueling twelve-hour shifts in the search for survivors in Ground Zero.

Keep reading to hear the full story of Buscemi's heroic efforts in the aftermath of the attacks and the heartwarming reason as to why there's little photo evidence of him at the scene.

And it was an event that was completely unexpected. An American Airlines Boeing 767 loaded with 200,000 gallons of jet fuel was hijacked by a brainwashed member of al Qaeda and was driven into the north tower of the World Trade Center at 8.45 am.

As the towers were collapsing and causing complete chaos to New York City, a fourth airplane - United Flight 93 - was hijacked after leaving Newark Liberty International Airport in New York. However, the crew and passengers on board were made aware of the 3 other attacks and fought back against the 4 hijackers.

According to Business Insider, one of the passengers, Thomas Burnett, Jr., told his wife over the phone: "I know we’re all going to die. There are 3 of us who are going to do something about it. I love you, honey."

And it is believed that up to 80,000 people – including police officers, firefighters, and emergency workers – rushed to the aid of the victims in the immediate aftermath of the attacks.

The first responders jumped to action without hesitation.

And, despite the dangers, they worked the hardest they had ever worked...

And thousands more have since passed away.

As of September 2018, more than 2,000 of the courageous men and women who assisted at the scene of the attacks have passed away as a result of 9/11 related illnesses.

Today, we remember those who courageously searched for survivors in the rubble of Ground Zero.

Thousands of brave men and women sacrificed their own health and safety by spending months in the Ground Zero ruins, tirelessly searching through the rubble and human remains for any survivors.

And, every year, the story of Steve Buscemi resurfaces.

You will probably know Steve Buscemi best from his roles in hit movies such as Reservoir Dogs and Pulp Fiction. But what exactly does he have to do with the 9/11 attacks?

Buscemi used to be a firefighter.

Before his Hollywood days of portraying gangsters and odd-balls, the New York-born actor was actually a firefighter for the Fire Department of the City of New York. He passed his civil service test when he was just eighteen, and worked as an FDNY firefighter in downtown Manhattan in the 1980s.

Though he left the service to pursue a career in acting...

He remained in touch with several New York firefighter causes and spoke semi-regularly at union rallies. He also hosted the HBO documentary, A Good Job: Stories of the FDNY.

Buscemi sprung to action and returned to his former firehouse to volunteer in the search for survivors.

And Steve always remained humble about his efforts. At the time, he said of his work during the rescue: “It was a privilege to be able to do it. It was great to connect with the firehouse I used to work with and with some of the guys I worked alongside. And it was enormously helpful for me because while I was working, I didn’t really think about it as much, feel it as much." Note: Steve can be seen in the top left of the above photograph.

There are very few photos of Steve at the clean-up...

Because he didn't want any publicity over it. After hearing about the attacks, and how many firefighters had gone in to assist and never returned, he simply wanted to use his expertise and experience to help his brothers out.

In 2013, the Brotherhood of Fire Facebook page shared this photo of Steve.

And they captioned it: "Do you recognize this man? Do you know his name? Lots of people know he’s an actor, and that his name is Steve Buscemi. What very few people realize is that he was once one of New York’s Bravest."

After outlining his previous career in the fire service, they outlined what he did to help after the devastating attacks: "After 9/11/2001... Brother Buscemi returned to FDNY Engine 55. On September 12, 2001, and for several days following Brother Steve worked 12-hour shifts alongside other firefighters digging and sifting through the rubble from the World Trade Center looking for survivors." "Very few photographs and no interviews exist because he declined them. He wasn't there for the publicity."

And, ever since the attacks, Steve has done so much for the fire service and his fellow firefighters.

The post continued to discuss the difference he has made for the fire department. "In 2003 he also gave a speech at a union rally supporting higher wages for firefighters and to stop fire houses from closing. He got arrested along with other firefighters."

And he has assisted in other disasters.

"Also not very well known is that in 2012 Brother Buscemi showed up in Breezy Point, NY and quietly assisted in the clean-up efforts of the damage and mass destruction left by Super Storm Sandy." The post is finalized with a final tribute to Steve: "Once a brother, always a brother! Just so we're clear… this guy is a Badass!!! Tip of the helmet Brother Steve!" What a guy. For more heroic stories from 9/11 scroll on...