On the 30th Anniversary of 'The Princess Bride,' Here Are 15 INCONCEIVABLE Behind-the-Scenes Secrets | 22 Words 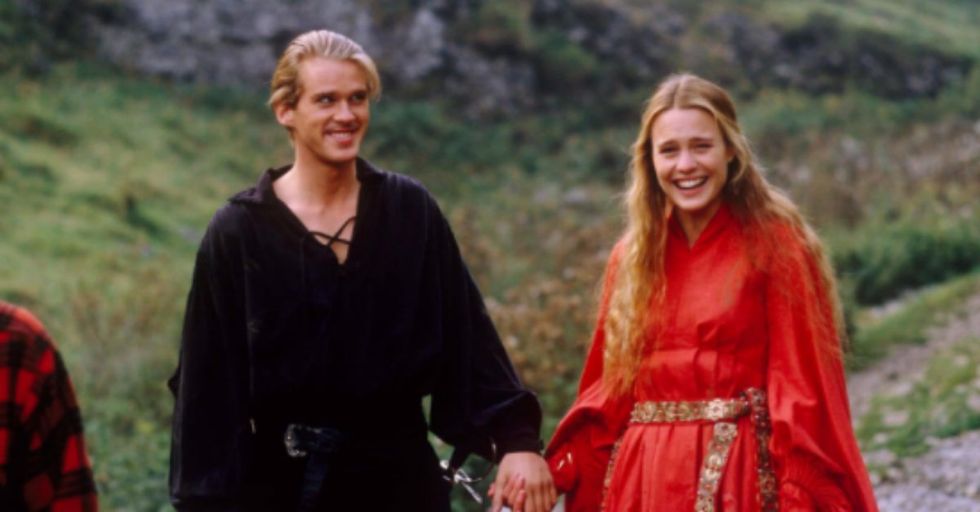 On the 30th Anniversary of 'The Princess Bride,' Here Are 15 INCONCEIVABLE Behind-the-Scenes Secrets

Anybody want 15 facts you didn't know about The Princess Bride?

Of course you do! September 25, 2017 is the 30th anniversary of the classic, undisputed* best movie ever made in the history of movies, so we must celebrate accordingly.

The behind-the-scenes stories and productions secrets are almost as charming and lovely as the movie itself, so it's only natural that we deliver the goods.

Have fun storming this list of 15 facts you didn't know about The Princess Bride!

*Some people may think there is a movie out there better than The Princess Bride. They are allowed their wrong opinion.

Author of The Princess Bride, William Goldman, had been trying to get the movie made for years, but in the beginning, Andre the Giant wouldn't sign on as Fezzik. So they turned to the little-known actor, Arnold Schwarzenegger, for the part. When the film was actually finally made, Schwarzenegger was too successful — they couldn't afford him, so the role went to their original first choice. And now we could not imagine anyone else in that role!

2. The Princess Bride was almost made many times.

Who says life is fair? It definitely wasn't for the numerous directors who tried to adapt The Princess Bride to film. They included Robert Redford, Norman Jewison, and François Truffaut! But it just wasn't meant to be. Productions stalled and people got fired... The project was cursed. But then, Goldman bought back the rights to the book, and Rob Reiner was finally afforded the opportunity to direct the film after This Is Spinal Tap did so well for 20th Century Fox.

3. William Goldman was attached to the script...maybe a little too attached.

William Goldman wrote the book and the script adaptation of The Princess Bride, but he was still somehow shocked when Buttercup's dress went up in flames in the Fire Swamp scene. Goldman reportedly shouted, "Oh my god! Her dress is on fire!" not realizing that it was supposed to be, even though he himself wrote it into the script. Goldman ruined that take, but we understand. That's some exciting stuff!

Rob Reiner told Mandy Patinkin he could have any role he wanted in The Princess Bride. He chose Inigo because his own father had died a few years before they filmed. When Inigo stabbed Count Rugen, Patinkin said it felt like he was killing the cancer that killed his father. "For a moment, he was alive," Patinkin said, "and my fairy tale came true."

5. There were a few on-set injuries.

Six weeks before filming, Cary Elwes broke his toe riding an ATV. If you watch the scene where Westley — disguised as the Dread Pirate Roberts — talks to Buttercup about Prince Humperdinck, you can see him limping slightly. Elwes was injured again in the scene where Count Rugen knocks him out with a sword butt to the head. Christopher Guest, who played Rugen, was hesitant to really hit Elwes on the head, but he was told to go for it. He did...way too hard, and Elwes actually passed out and had to be taken to the hospital. That's the take that's in the movie. Last, but certainly not least, Mandy Patinkin actually bruised a rib from trying not to laugh during Miracle Max's scenes. Billy Crystal was too damn funny.

This may be the cutest behind-the-scenes movie fact ever: It would get cold while the crew was filming in the mountains, so in order to keep Robin Wright warm, Andre the Giant would simply put his giant hand on her head. Instant heating pad!

Elwes and Patinkin spent months training for their duel. Goldman made sure all the moves were accurate to 17th-century sword fighting techniques, and all the references they made to moves and styles are 100 percent real. That's commitment, and that's part of what makes it one of the best sword fights in film history.

Among them were Courtney Cox, Meg Ryan, Uma Thurman, and Whoopi Goldberg. William Goldman's ideal Buttercup — before Robin Wright came along, of course — was Carrie Fisher. Fortunately, they held out for Robin Wright, who's absolutely perfect in the role.

9. The classic film is actually a cult classic; it didn't do too hot at the box office.

When The Princess Bride hit theaters in 1987, it was only a modest success, grossing $30 million at the box office. Only when VCRs became popular and people started buying it on VHS did people finally see the wonder of The Princess Bride. It's like a miracle...Max!

In 1998, Cary Elwes was at a White House function, and he met then-President Bill Clinton. Elwes was about to introduce himself when Clinton said, "I know exactly who you are, Cary... Chelsea and I are huge fans of The Princess Bride. We've seen it over 200 times. I know every line. It's a great movie... You were great as Westley." How shocked are you? Is the answer "not that shocked because The Princess Bride is literally the best movie ever and obviously even Bill Clinton loves it"? Yeah, we know.

11. Speaking of Cary Elwes, how do you pronounce his last name?

Do you pronounce it as you wish? Not exactly. In his Reddit AMA, Elwes gave this succinct answer: "Elvis, but with a W." There you go.

12. Mark Knopfler agreed to do the music for the movie under one condition.

Mark Knopfler of Dire Straits did all the music for The Princess Bride but only because Rob Reiner agreed to put the hat he wore in This Is Spinal Tap in the movie. If you look carefully, it appears in the grandson's bedroom (played by Fred Savage).

13. Elwes was a fan of the book long before he got to play Westley.

Elwes fell in love with The Princess Bride when his stepfather gave him a copy of the book when he was 13. He immediately fell in love with the story (no doubt because of all the kissing...and adventure and sword fights), but he had no idea he'd actually be Westley one day! Reiner was also a longtime fan of the book, and we're all so glad he's the one who ended up directing the movie. While the book and the movie have their differences, they both epitomize the romantic, hilarious adventure homage perfectly.

14. Wallace Shawn was not the first choice to play Vizzini.

Wallace Shawn knew that he wasn't the first choice to play Vizzini. In fact, he wasn't the second choice, either. Both Danny DeVito and Richard Dreyfuss turned down the role before it was given to Shawn, so he was paranoid throughout the whole shoot that he'd do something wrong and be fired. But today it's INCONCEIVABLE that to think of anyone else in that role.

15. The origin story of The Princess Bride is too cute to boot.

The story goes that before William Goldman wrote The Princess Bride, he asked his two daughters what he should write about. One of them said "a princess," and the other said "a bride." And that's how we have The Princess Bride. Hasn't it been quite a ride? No more rhymes, I mean it! Anybody want a peanut?