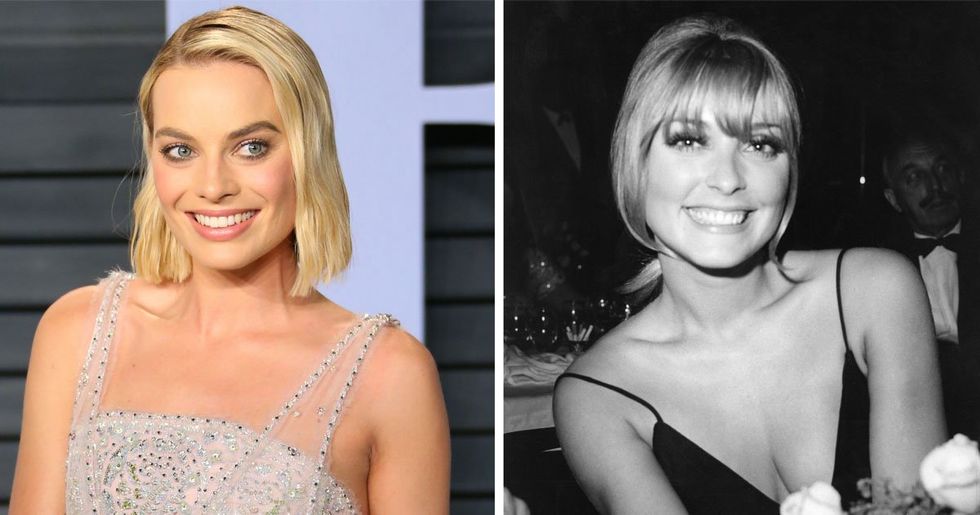 The best movies are usually long, realistic and rated R and Quentin Tarantino's upcoming hit is all of those things.

Once Upon A Time In Hollywood is set in 1960s Los Angeles, the center of a revolutionary time. It tells the story of an old actor (played by Leonardo DiCaprio), who thinks his career is over, and his best friend, (played by Brad Pitt) who wants to help him revive it. While it seems that they have a plan to achieve this goal, the star-studded world of Hollywood gives them a lot more than they originally bargained for.

If there's one film you need to watch this summer, it would be this one. A film of thrilling plotlines and an all-star cast, what more could you ask for? Stick with us as we take you through the big-name actors and compare them to the real-life people that they're playing.

Prepare to be shocked because the resemblance is slightly frightening...

Once Upon A Time In Hollywood is set to hit the big screens mid-August, but it seems as if the whole world is already buzzing with excitement about the film.

Spoiler Alert: They're all positive!

Jordan Horowitz didn't want to give too much away!

I mean, if you're going to tell us that it's a "masterpiece", then we're definitely going to have to watch it!

The movie also goes into depth about key events at the time, including The Manson Family Murders.

The 60s were known for crimes that defined the era, amongst many other, less depressing things. The Manson Family Murders, also known as the Tate Murders, were a series of killings carried out by a cult known as The Manson Family.

And people seemed to be worried about it...

Remember when people were worried that Once Upon a Time in Hollywood would glorify the Manson Family murders? I've… https://t.co/3texZuRK93
— John Squires (@John Squires)1564455526.0

But obviously, Tarantino knows what he's doing. According to reviews, he managed to depict the cult for the sick and disturbing individuals that they were which made the film feel even more realistic.

He's had years of experience under his belt so one would expect him to understand the details of taking history and making it entertaining while, at the same time, being able to retain the educating aspect of it. And that's exactly what he's done with this new release.

The figures prove that this is going to be the best movie of the summer.

And if you're still not convinced...

If, in the next few minutes, I can't convince you by revealing the star-studded cast, then keep scrolling for the full trailer. I can assure you, that will get you on board with the rest of us.

Firstly, we have the protagonist, Rick Dalton.

Played by: Leonardo DiCaprio. Do I even need to say anymore?

His character aims to revive his acting career.

The former star of a 1950s Western television show called Bounty Law, Dalton is hungry for stardom again, enlisting the help of his best friend and his next-door neighbors, who are also actors.

His character has a dark past that prevents him from getting any acting roles.

Booth was accused of killing his wife and the nasty rumour has stuck to him like glue. So he relies on Dalton's career in order to survive, driving him around from audition to audition.

Next up, we have Sharon Tate.

Played by: Margot Robbie. She plays one of the actors that have moved next-door to Rick.

The resemblance she has to the real-life person she plays is uncanny...

The Manson family received immense attention for the brutal stabbing of Tate (who was pregnant at the time) and several of her other friends in 1969.

Played by: Emile Hirsch. He plays a Hollywood hairstylist who was previously in a relationship with Tate.

And he fits the description perfectly too.

Sadly, he was also one of the people murdered by The Manson Family.

This is Abigail Folger.

Played by: Samantha Robinson. An heiress to the Folger coffee fortune, she was a lesser-known victim of The Manson Family slaughter.

Here she is, compared to the real-life Abigail.

In the film, she spends the evening with Tate and the rest of the gang when the murderers break into the property. Initially, she got away but was later caught on the lawn where she met the same fate as the others.

Next up, we have Folger's boyfriend, Wojciech Frykowski.

Played by: Costa Ronin. A screen-writer and the last of the brutal murders committed by the cult that night.

I'll tell you what, Tarantino did a great job at picking this cast!

He also managed to escape the house but was still murdered, being stabbed and shot numerous times.

Played by: Damon Herriman. The leader of the disturbing cult that was active in the late '60s.

Who would ever want to resemble a killer?

But in this case, it's a good thing. Reviews state that Herriman managed to capture the role of a manipulative cult leader perfectly. Props!

And here's his right-hand man, "Tex."

Played by: Austin Butler. Charles "Tex" Watson was in charge of carrying out the operation to murder Tate and her friends that night.

This has to be the most genius casting on Tarantino's behalf.

It's all in the eyes. Butler's piercing stare and icy cold pupils give him the perfect, slightly psychotic look that embodies Tex perfectly. We love it!

And now onto the other cult members, starting with Patricia Krenwinkel.

Played by: Madisen Beaty. Krenwinkel, also known as "Katie", was a prominent cult member. After originally meeting Manson at a party, she quit her job to follow in his footsteps.

Can you see the resemblance?

She helped murder Sharon Tate and her friends.

Played by: Victoria Pedretti. Even though she had no involvement in the murders of Tate and her friends, she was responsible for killing Leno and Rosemary LaBianca just days after.

I'm sure you remember her from her role as Nell Crain...

The Netflix show, The Haunting of Hill House hit our screens last year. Pedretti played one of the main characters on there too, and it was just as disturbing as her role in Once Upon A Time In Hollywood.

And the scariest member of the clan was Susan Atkins.

Played by: Mikey Madison. Atkins was a former topless dancer and has been described as one of Manson's most "loyal" disciples.

She was renowned for her brutality...

She was convicted of the murder of Sharon Tate and her unborn baby. She did end up confessing, saying she stabbed her approximately sixteen times... Yikes! You cal almost see the crazy behind her eyes...

The star-studded list doesn't end there just yet. Next, we have Lynette Fromme.

Played by: Dakota Fanning. Also known by the name "Squeaky". God knows why.

You may know Dakota from more tamer movies...

Her roles in Uptown Girls and Now Is Good, are nothing compared to this one. In this upcoming film, she plays a cult member that is responsible for the attempted assassination of President Gerald Ford. Big moves, Squeaky.

Catherine Share was also a loyal follower of the cult.

Played by: Lena Dunham. She dedicated her time to recruiting new members, in particular, "pretty girls", as opposed to directly being hands-on during the murdering.

However, she did attempt to kill a witness who was going to testify against the entire family. She even tried continuing the traditions of the cult while the others were rotting behind bars.

And of course, you'll be familiar with Bruce Lee.

Played by: Mike Moh. He was a close friend of Sharon Tate. Weirdly enough though, he was also suspected as one of the murderers at one point, but obviously, it couldn't have been him.

A martial artist by day, an actor by night, Mike Moh can do it all.

No wonder he was picked for this role!

And finally, we have the legend that is Steve McQueen.

Played by: Damian Lewis. McQueen was supposed to spend the evening with Sharon and her friends on the night of the murder. Instead, he ran into a woman and spent the night with her.

Phew, he narrowly avoided being stabbed to death!

McQueen's ex-wife said to The Telegraph: "Going off with that girl saved his life. After that, he became more paranoid and wouldn't let me go anywhere without a gun."

And there we have it!

What a cast, eh? We're so excited about this film, and you had better be too!

Here's a look at the trailer for Once Upon A Time In Hollywood .

Now, are you with us?