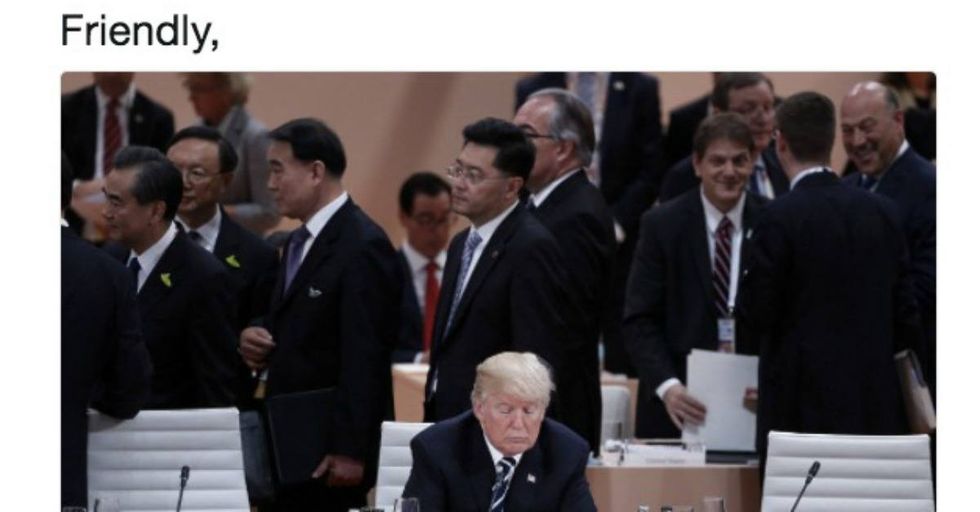 In case you missed it, President Trump recently spoke at the Jamboree of the Boy Scouts of America, which takes place every four years. If any other president did this, you probably wouldn't even hear about. But Donald Trump is our commander-in-chief, so here we are.

Nearly 35,000 scouts between the ages of 12 and 18 were present for Trump's rambling speech, in which he managed to bring up fake news, Hillary Clinton's campaign, the "cesspool" that is politics, and even the fact that Obama never spoke at the Jamboree.

The speech enraged parents. CNN even did a round-up of its 29 most cringeworthy moments.

Donald Trump turned what should have been an entirely apolitical event into an incoherent rabble-rousing session of incredible tone-deafness. At this point, we would expect nothing more.

Like he said, it's worth reading. It's hard to read because it doesn't make much sense...

But it's important to know what topics our president felt were appropriate to expound upon in a room full of teenagers.

Spoiler alert: Almost none of what he said was appropriate. The speech is rampant in its politicizing and lack of full, English sentences.

Many were quick to play the Hitler card.

But in this case, it's kind of relevant. These are young, impressionable minds, and they're being fed lies and exaggerations.

The radicalization of the American public has been underway since Trump's campaign for president gained footing. It may seem far off from Germany in the 1920s and '30s. But the warning signs are there.

Many former scouts spoke out against Trump's speech and even his involvement in the event in the first place.

Chris Turner, a state representative from Texas, tweeted, "As an Eagle Scout — and an American — really saddened by @POTUS words at @boyscouts jamboree. Those kids deserved far better." Similarly, Dan Kennedy, a journalism professor, tweeted, "This is nauseating. I'm an Eagle Scout and a former scoutmaster. The BSA was never partisan."

Perhaps the most moving response to Trump's tweet came in the form of this thread from a former scout.

Jesse McLaren, a video producer for BuzzFeed, breaks down the qualities of a boy scout according to Boy Scout Law, which states that "A scout is trustworthy, loyal, helpful, friendly, courteous, kind, obedient, cheerful, thrifty, brave, clean, and reverent." Each quality is paired with an image or a GIF that is quite illuminating.

Pushing the "birtherism" conspiracy after it had been debunked and debunked over and over again isn't exactly what anyone would call "trustworthy." This man is the President of the United States.

First, Trump criticized Comey for not bringing charges against Hillary Clinton, then he praised Comey for renewing the investigation into Clinton before the election, then seven months later, he fired Comey, allegedly for mishandling the investigation into her emails. The director of the FBI is not a political figure and should not make politically-motivated decisions, but Trump's treatment of the guy shows no loyalty to his own convictions. That's bad.

Leaving his own wife in the dust at his inauguration is textbook Trump. Are you starting to sense the irony in these tweets?

I don't think I've ever heard Donald Trump described as a "friendly" guy. It's telling.

You mean pushing your way to the front of a crowd of world leaders isn't "courteous"? Who would have thought?

This attack on an MSNBC show host is just the latest awful thing Donald Trump has said about women. It's unacceptable. Period.

This one stings. With all the talk of collusion, it's hard not to see Trump as a pawn in Putin's game.

One thing Trump is definitely not is "cheerful." With a 36 percent approval rating, though, he doesn't have a whole lot to be cheerful about.

This one's pretty self-explanatory. A scout is thrifty, which most likely means he doesn't have a room that's entirely made out of gold with floor-to-ceiling windows.

I can say with absolute conviction that Donald Trump is one of the most cowardly people I've ever been aware of in the entire history of the world.

He has no respect for...well, anyone. It's sad that he had the opportunity to spread his awfulness to tens of thousands of young men.

From, a Former Scout

This is a mic drop if I ever saw one. Makes you think, huh?