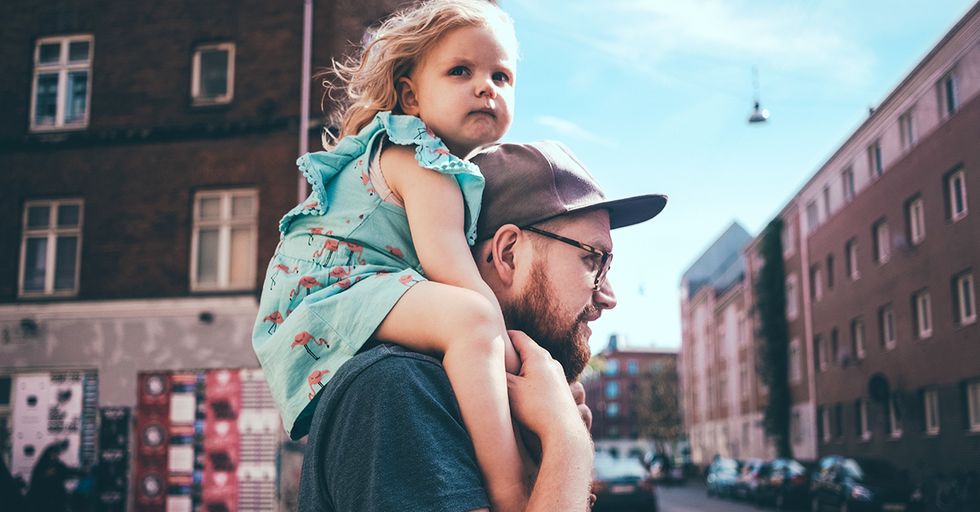 All parents cope with the challenges of parenting in different ways.

Some draw themselves bubble baths. Others pop a bottle of wine.

This dad, Chris Illuminati, takes his own, unique approach.

Kids are great, but also they cause headaches. Like, the kind that only goes away with several Advil.

Chunky peanut butter is rarely the first choice of little kids, but it's clearly the better peanut butter. Plus, it takes less effort to make than creamy.

What were you even thinking, Dad?! Obviously, you have to be able to dance at a birthday party. That's like, Life 101.

One thing that's important to do as a parent is to crush all the dreams and hopes of your child so they understand the harsh reality of life. Just kidding don't ruin the illusion. Any parent will relate to the next one.

Kids are fickle, and they have terrible memories. Don't rely on them to believe the things that come out of their own mouths.

The most painful part of being a parent is stepping on Legos. Hands down.

Seems like sound logic to me. Just kidding. Sausage pizza is the best.

As a parent, you'll have no shortage of to-do lists. But you'll probably also have a "to glue" list for all the stuff in your house that your clumsy kids have broken.

It's terrible, but it's true. My advice for this is to...just not do anything that will make your kids hate you. The next one is a conundrum for any Marvel fan.

You know, you never expect your kids to ask the tough questions that make you question everything you've ever known, but then they surprise you.

This is a handy guide for every color your kid's face will turn. I would say "Have extra wipes ready" is pretty good general advice, too.

So many things I did as a kid were things my parents made me do just because they also had to do them. Piano lesson, horseback riding, Hebrew school, etc. The list goes on.

Living with a four-year-old is like living with a drunk person who yells at you one second and then hugs you and kisses you the next. It's a nightmare.

Guaranteed Katniss Everdeen would lose her sh*t if she had to keep a kid from grabbing everything off the aisle at 9 a.m. on Saturday morning. The next one is the for the planner in your family.

As long as you expect nothing to ever go right, you'll never be surprised! Seems like a perfect way to go through your life.

When I was a kid, I accidentally left my yellow blanket at our hotel room when we were on our family vacation. My parents called the hotel, and they mailed it back, and I was happy again. That's the only reason I still talk to my parents (JK JK but not really).

A parent is really a personal trainer, an army captain rallying the troops, and a zookeeper keeping the animals under control.

But fair warning: If you start a song with "This is a story all about how..." your kids are going to want to hear the whole story. Beginning to end.

What a generous gift-giver! I hope she makes it an annual tradition. Share this with someone who understands the plight of the parent!