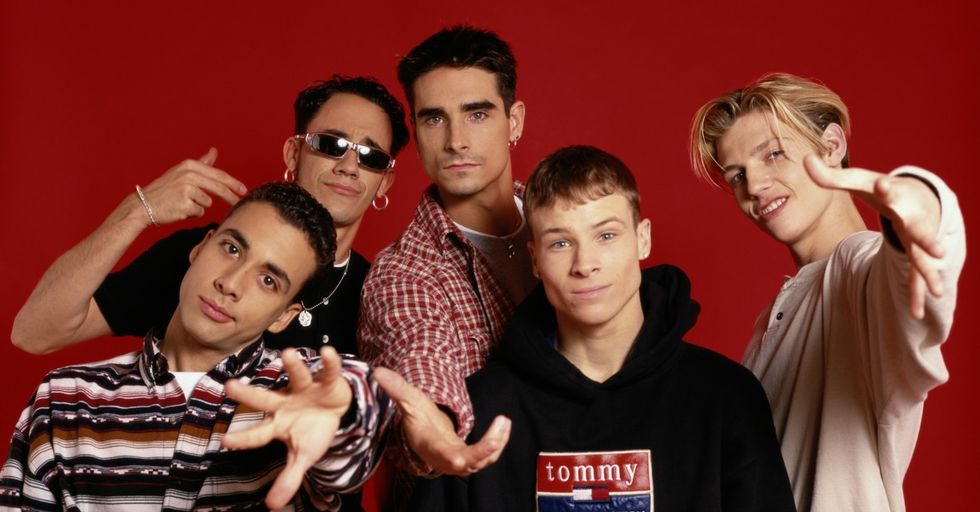 One of the Backstreet Boys Accused of Rape in Heartbreaking Letter

More and more women are coming forward with stories about how they were sexually harassed or assaulted by men in their lives. They may not have felt comfortable coming forward when the events happened, for fear of being blacklisted or flat out not being believed. But after the #metoo Twitter movement, and the takedown of Harvey Weinstein and other men who abused their power, a growing number of people are speaking out about these sorts of experiences.

One of those women is Melissa Schuman, a former member of the girl group Dream.

She wrote, "I’m not afraid anymore #metoo". She told the graphic story of where she says that Nick Carter, former member of the group Backstreet Boys, assaulted her when she was just 18 years old. She titled the piece, "Don't Worry, I won't tell anybody."

She started off by saying that she tried to talk about the story after it happened, but wasn't able to.

"I am about to share something that I’ve wanted to pretend never happened since I was 18. A burden I thought I’d have to carry for the rest of my life and suffer in silence. "For those who do read this story, I know will ask, like any other victim of rape or assault, why I never came forward earlier. And the truth is, I tried. "A short amount of time passed after the incident, I confided in my then manager, Nils Larsen, that I wanted to come forward. He heard me out and said he would do some investigation and would try to find me a good attorney as I intended to press charges. "He later informed me that my abuser, who’s [sic] name I will disclose later in this article, had the most powerful litigator in the country."

"He was right," Melissa wrote. She didn't have the money or social status to name her abuser and still be able to continue with her career.

"I didn’t have the money, the clout or access to an attorney who was powerful enough to stand up against my abuser’s legal counsel. I was told I would likely be buried in humiliation, accused of being fame hungry, and it would ultimately hurt me professionally as well as publicly. I was focused on building a career and name for myself at the time and I didn’t want what he did to further affect my life and future."

When the incident occurred, Melissa was working on a made-for-tv movie with Nick Carter.

Nick invited Melissa and her friend over to his apartment. They played video games and drank some alcohol provided by Nick, who was 22 at the time. Then Nick invited Melissa into his office. He said that he wanted to show her some music that he'd been working on. She was eager to hear it and followed him.

"I could draw a diagram of the layout of this apartment," Melissa wrote in her blog.

"Barely there furniture throughout with the exception of the office. He took my hand and led me down the hallway to the office. He went to his computer and started to play the music he was working on, he turned off the light and we sat there in the computer light listening to his new stuff. And naturally we started to kiss. He was aware that I was a virgin and that I held to religious conservative Christian values. I was vocal about this. Everyone knew about this, including those who repped me." She warned that the next part of her story would get graphic.

"I want to warn you that what I will be disclosing next describes graphic, violent sexual behavior. Please continue reading at your own discretion."

Nick took Melissa into the bathroom and tried to unbutton her pants. She asked him what he was doing and told him that she didn't want to go any further than kissing.

That's when he said, "Don't worry, I won't tell anybody."

But that's not why she didn't want to have sex with him. Obviously. Then he proceeded to perform oral sex on her even though she repeatedly told him to stop. She kept turning off the light so that she wouldn't have to see it happening, but he kept turning it on so that he could look at her. Then, after he had pushed himself on her without her consent, he demanded that she perform oral sex on him as if he had done her a favor.

Next Melissa described how trapped she felt in the bathroom with Nick.

He was bigger than her and growing impatient. She didn't know where her friend was. She didn't think she would be able to get out of the door if Nick were to try to stop her, and she knew that he would. So when he asked her again to perform oral sex on him, she thought that maybe if she did, it would help her get out of this horrible situation. She felt like she had no choice and was forced to watch herself do this act against her will. After she repeatedly told him that she was a virgin and wanted to wait until marriage to have sex, he continued to push himself on her.

Nick threw her on the bed, laid on top of her, and pinned her down.

He was heavy and she couldn't move out from under him. She wrote about the horrifying and dehumanizing moment when he violated her and expected her to be impressed. She was trapped and was forced to endure this heinous violation with no means of escape.

When she woke up, Nick was gone.

She didn't look for him. She just wanted to leave as fast as she could. She said that she didn't tell her friend what had happened because she didn't even want to admit to herself that it had.

Months later, her manager asked her to do a special with Nick.

That special could get her a deal with a major label. She didn't want to do the special, but couldn't think of an excuse to tell her manager. When she did the set, she was rightfully cold to Nick and told him that she was happy with her boyfriend at the time. The label head said that she sounded "amazing" and that he would be in touch with her. But after weeks, she wasn't getting calls back about the label. They signed someone else. Her own manager didn't want to work with her anymore. Melissa wrote, "I could tell by his tone that he was no longer interested in working for me and I couldn’t help but wonder if Nick had any influence in it. "I never did another showcase again after that and I quickly lost interest in pursuing a career as a recording artist. "I was broken. "I was tired. "I was traumatized."

She told her story in the hopes that it would help other women be believed when they told theirs.

She didn't want to talk about it, but when she saw that Nick Carter was being investigated for sexually assaulting a fan at a house party, she noticed that people were posting nasty things in the comments of that article, saying that the girl was making up a story to get famous. She knew how backward that was, and felt inspired to come forward with her story in support of other victims. Melissa wrote, "I feel I have an obligation now to come forward with the hope and intention to inspire and encourage other victims to tell their story. We are stronger in numbers. If you are reading this and you have been assaulted, know you don’t have to be silent and you are not alone. I know it’s scary. I’m scared. I believe you. I stand with you and together I hope we can bring light to things that have been lost in the darkness for so long. #MeToo"

When Melissa's story was posted to Twitter, fans gave her an outpouring of support.

I just want to thank everyone for the outpouring of love and support. Thank you for bearing witness to my story. Th… https://t.co/uk0y1ocRqJ
— MelissaSchuman (@MelissaSchuman)1511246657.0

They were disgusted that someone they had looked up to had committed such a disgusting crime that Melissa had to live with. Nick Carter denied Melissa's allegations. He told People, "I am shocked and saddened by Ms. Schuman’s accusations. Melissa never expressed to me while we were together or at any time since that anything we did was not consensual. We went on to record a song and perform together, and I was always respectful and supportive of Melissa both personally and professionally" We commend Melissa for sharing her story. Read it in full here.