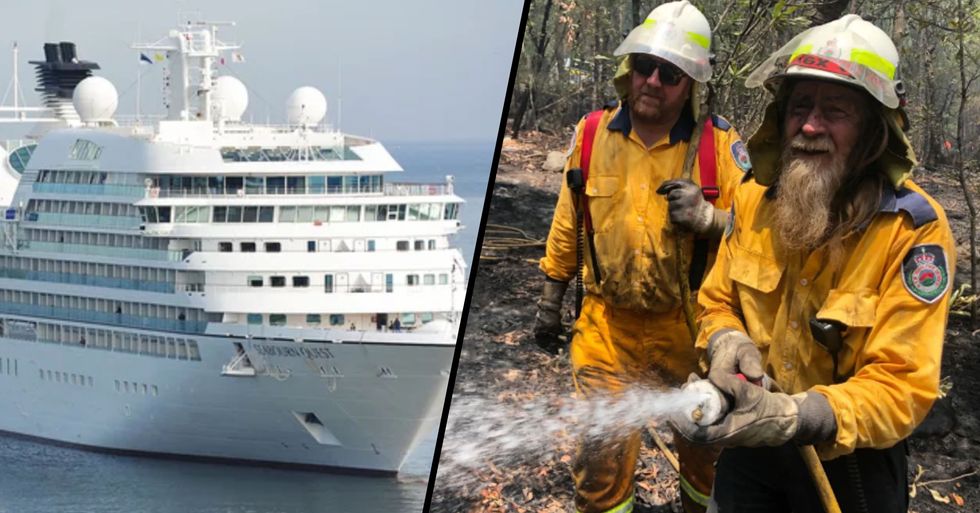 Ever since September, firefighters in Australia have been pushed to their limits trying to put out the relentless bushfires. Their unwavering commitment and bravery is truly heroic, and now, their work has been honored in the sweetest way.

Keep scrolling to take a look at the touching tribute, as well as the ongoing work the firefighters have been carrying out...

Due to soaring temperatures and one of the worst droughts in years, the relentless fires have been burning since September. And while long-awaited rainfall has helped - the fires are still burning in many areas.

New South Wales has been one of the hardest-hit areas.

There have been fires reported in every state, but New South Wales truly took a beating by bushfires. More than 6,000 buildings have been destroyed.

At least thirty-four people have been confirmed to have died in the fires since they started...

And it's not just the flames themselves that have had deadly consequences...

In December, the smoke was so bad in Sydney that air quality measured eleven times the "hazardous" level, CNN reports.

Firefighters all over the country have been tirelessly battling the formidable blazes.

Australia was ultimately forced to make a global call for help...

Canada was the first to respond and take action. The Canadian Interagency Forest Fire Centre, based in Winnipeg, answered the call for help after realizing the bush fire situation is expected to continue for many more weeks and they even gave up their Christmases to help fight the raging fires.

Including the U.S. and New Zealand, who have sent in more firefighters to try and help tackle the blazes.

Volunteers stepped forward all around the country...

This is the first time since 2010 that the U.S. has sent firefighters to help Australia tackle the blazes, Huffpost reports.

The National Interagency Fire Center told the Los Angeles Times that “roughly 100 firefighters" had been sent throughout December and early January.

As firefighters from the U.S. arrived at Sydney airport, everyone had an amazing reaction to the team's arrival.

And truly sums up the commitment and bravery of these firefighters.

The heroic firefighters are being honored in many ways.

Funko Pop, the brand known for making sell-out pop culture collectables, has unveiled a figurine dedicated to the Australian firefighters.

The figurine is titled the "RSPCA Bushfire Heroes Firefighter With Koala Funko Pop."

Popcultcha released a statement about the new collectible, writing: "Popcultcha and Funko are teaming up to help provide assistance to Australian wildlife that have been left devastated by the ongoing bushfire crisis with the release of this LIMITED EDITION Bushfire Heroes Pop! Vinyl Figure!"

All proceeds are going to the RSPCA National Bushfire Appeal.

"All profits from the sale of this Popcultcha Exclusive Pop! Vinyl Figure will be donated to the RSPCA National Bushfire Appeal through monthly payments until sold out," the company said.

The proceeds will help so many animals in need.

"The RSPCA are working alongside government and emergency agencies, veterinarians and local authorities to provide much-needed equipment and supplies, emergency care and identifying and assessing injured animals in need of assistance. "Their work will continue for months after the fires have ceased."

The figurine retails at $19.99. You can check them out here. What a truly amazing initiative.

Royal Caribbean, one of the leading cruise companies worldwide, has made a generous offer to the Aussie firefighters.

The Spectrum of the Seas is heading to Australia to offer them a well-earned break.

"It is our privilege to offer two complimentary sailings onboard our newest superliner Spectrum of the Seas from Sydney in the coming weeks, as a way of thanking the incredible first responder community who worked tirelessly over the bushfire season," a spokesperson told Traveller.

"We are in a fortunate position to offer such brave members of our community and their families the chance to join us for a few days to relax and unwind."

"We will be announcing further details in the coming week following consultation with the relevant authorities, including cruise schedules and the booking process."

He was glad to offer the "opportunity to join us for a few days and let them relax and unwind in the company of other volunteers and first responders."

"By welcoming and accommodating them aboard Spectrum of the Seas, we hope to recognize their contribution and offer them our hospitality."

What a touching gesture. For more on the bushfires, keep scrolling to see the touching moment an orphaned kangaroo is seen hugging a teddy bear...