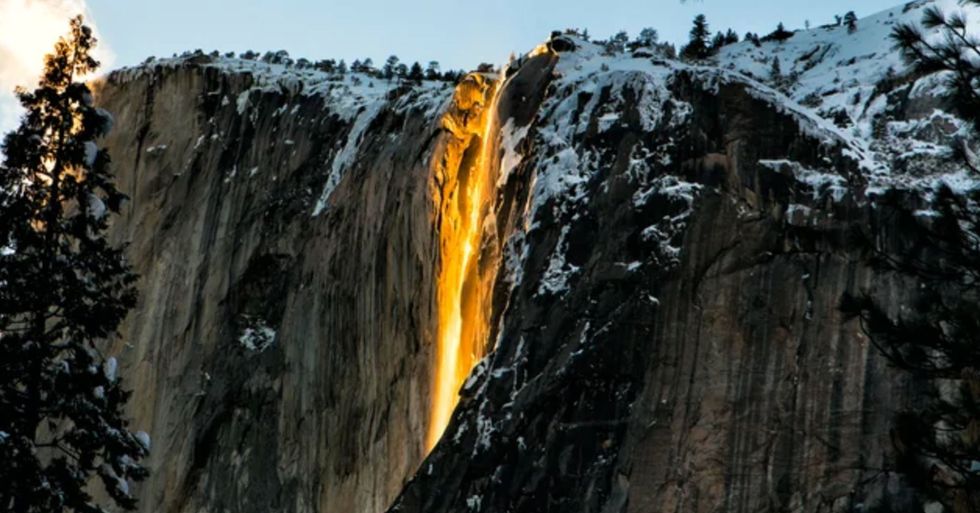 Here in the United States of America, there are countless beautiful locations that are a must on our bucket lists.

The Yosemite National Park in California is certainly one of these locations, and this month, one of its waterfalls will look like flowing lava.

Here in America, we're extremely lucky to call such a beautiful country our home.

The United States is a vast space of gorgeous locations that truly credit Mother Nature.

There are sixty-two national parks spread out across America...

And each park is unique and beautiful in their own little way.

More than 300 million people visit our national parks every year...

And these visitors pour over $35 billion into the national economy.

We are the home to a lot of waterfalls...

And they truly are the most beautiful things.

Yosemite National Park is the home to some beautiful waterfalls.

The park is in California and it attracts millions of visitors every year.

Yosemite is famous for its El Capitan rock wall...

This is basically a vertical rock formation located on the north side of Yosemite Valley, near its western end.

And it is truly a magnificent sight to see.

But there is something very special due to happen this month...

And it is something called a Firefall.

This natural event happens in February every year...

And it involves the setting sun to shine on the waterfall at a certain angle, giving the falls a glowing effect.

But why does it specifically happen in February?

The temperature needs to be warm enough so the water doesn't freeze over, and the sky needs to be clear... and it turns out that February is the best time for these particular conditions!

Which is another reason for February being the perfect time of the year for a Firefall.

It has been predicted to last between the 12th - 28th of February this year...

And the lava-like waterfall specifically attracts millions of guests every year.

And this can actually result in severe overcrowding in the national park.

It is a stunning sight to see...

This is truly a sight not to miss...

But remember, there's always next year if you do miss it! Keep scrolling to learn about what happened to the Moon, Mars, and Earth just this morning...