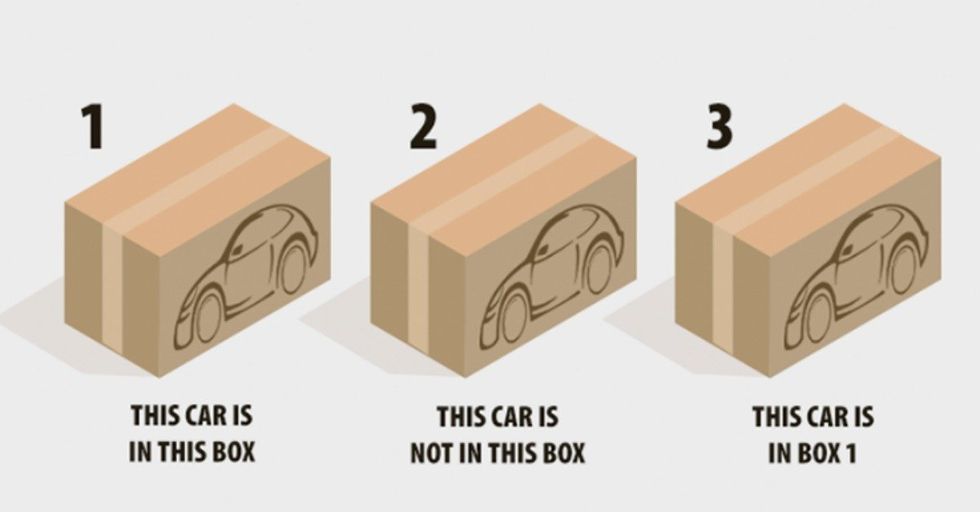 Only 37% of People Got This Puzzle Right On the First Try...Can You?

Is your brain warmed up and ready to go?

It better be, because this is a logic puzzle because, well, it requires logic. It’s simply using the rules of deduction to solve this puzzle. And apparently only 37% of people got it right on the first try — no fair going back and trying it again after you see the solution — so let's see how your brain stacks up.

Which box has the car?

Before you scroll down, give it a minute or two of deep thought... Okay, let's break it down.

Suppose Box 1 is true, then the car WOULD be in Box 1. That would mean Box 2 and 3 would have to be false.

If Box 1 does in fact have a car, that means Box 2 would have to be false and that Box 2 DOES have a car, which means both boxes would have a car and that’s not possible. That means we ruled out Box 1. Let's move on to Box 3.

But if the car were in Box 3 that would make the statements for Box 2 and 3 both true, which is against the rules of the riddle.

So that means that it has to be in Box 2 then, right?

Since Box 3 is the one true statement, that means Box 1 actually doesn’t have a car and the car is in Box 2 because it’s false and Box 3 stays as the only true one. How did you do?