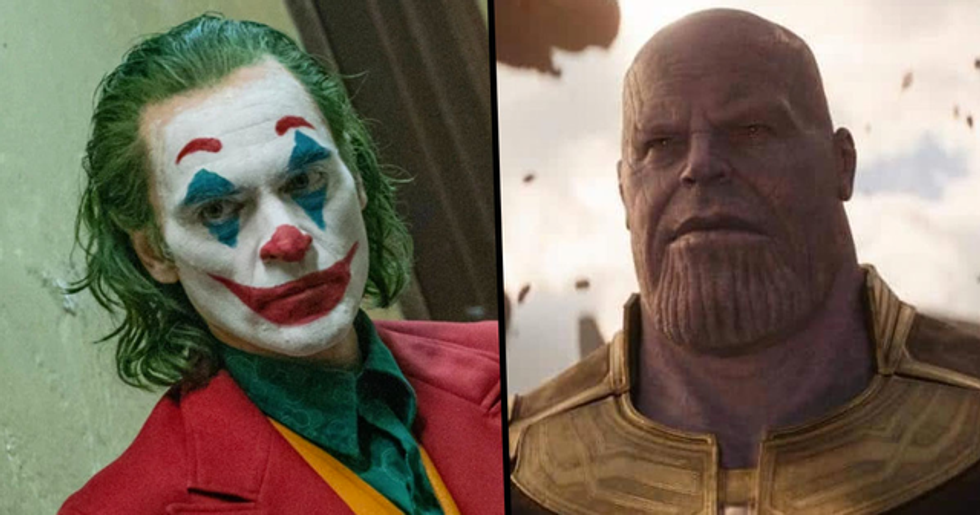 Only 44 Movies Have Hit $1 Billion Mark At The Box Office, Here They Are

This week, it was announced that Joker had joined the exclusive "billion-dollar movie" club - making it the first-ever R-rated movie to do so. But alongside the incredible Joaquin Phoenix vehicle, there are also another forty-three movies that have made the same impressive grade.

We've got the full list here - and some of them may surprise you. Did your favorite make the cut?

The movie broke the record for the fasting film to gross over a billion dollars.

It's estimated that within the first 5 days the movie was in theaters Endgame hit the billion-dollar mark.

This James Cameron vehicle also holds the title for the second highest-grossing movie of all time, at $2,788,000,000.

For a long time, it held the title.

But it was knocked out of the top spot by Endgame - in a remarkably short amount of time.

Considering its early release, Titanic holds a surprisingly high spot on the list with a gross of $2,187,500,000.

It first grossed $1.8 billion during its initial release.

But the movie managed to make it over the $2 billion benchmark after its re-release in 3D in 2012.

At the time of its release, the seventh Star Wars episode broke records after earning a billion dollars in just twelve days.

Which makes it officially the highest-grossing Star Wars movie of all time.

The second Avengers movie in the top 5, it broke the all-time world record with a $630 million opening weekend.

It also became the fourth movie ever to break the 2 billion benchmark.

At the time of its launch, this movie was a massive record-breaker, becoming the fastest ever billion grossing movie in just thirteen days.

It also had an opening weekend gross of over two hundred million.

The live-action remake of the classic Disney movie made its billion within three weeks of being in theaters.

It was the fourth movie of 2019 to break the milestone.

The first of the franchise broke the billion-dollar mark after nineteen days in theaters.

The star-studded cast no doubt helped push it over the edge.

The movie broke records when it surpassed $1 billion gross revenue in seventeen days.

At the time it was the fastest ever live-action movie to hit that mark.

Tired of hearing about Avengers yet? This movie opened in the number one spot all around the world.

It also meant the franchise joined just 3 others (more on those later) with 2 or more episodes in the billion-dollar club.

It hit the milestone in twenty-six days.

It still holds the record for the best February opening weekend ever.

Surprisingly, this is the only Harry Potter movie to gross over a billion dollars.

The only other movie in the franchise which came close was the first movie, which currently stands at a "meager" $975 million.

The Last Jedi crossed the mark 3 weeks after its release.

It made $500 million in its first weekend alone!

The second movie in the franchise followed an impressive opening weekend with a billion-dollar gross in 2 weeks.

But two movies in the billion-dollar club bodes well for the upcoming third installment.

This movie still holds the top spot for the highest-grossing animated movie of all time.

It also won 2 Oscars - not bad for a "kids" movie. And the sequel seems set to be just as successful.

This movie passed the billion-dollar benchmark in April of 2017.

These figures make the movie a surprise winner of the highest-grossing movie of 2017.

Fourteen years after the original, this sequel managed to crack the billion-dollar list.

It also holds the title for the fastest animated movie to break the billion-dollar benchmark.

In April of 2017, the eighth movie of the franchise also crossed over the billion-dollar finish line.

This makes it the second of the popular franchise to join the billion-dollar movie club.

It took just 3 weeks for Iron Man 3 to hit a billion dollars in gross revenue.

It served as proof to everybody that Tony Stark was a beloved part of the MCU.

Strangely enough, this is the only movie from the Despicable Me universe to gross over a billion dollars.

This makes it perhaps one of the more surprising entries on our list.

Marvel totally dominates the top spots of the chart overall.

Captain America: Civil War was also the first movie of 2016 to cross that billion-dollar barrier.

Many were surprised to see this movie join the elite billion-dollar club.

It was the first DC superhero movie to hit the milestone.

This movie crossed the billion-dollar mark just one month after its release.

This makes it the most fiscally successful Spider-Man movie of all time.

After a record-smashing opening weekend, it took just over 3 weeks for the film to gross that all=important billion.

It's one of seven MCU movies on the coveted billion-dollar list.

This is the first Paramount movie to gross over a billion dollars.

A large amount of its revenue came from international audiences.

Its earnings now stand at $1,123,800,000, perhaps thanks to the fact this movie was the final Shia LaBeouf vehicle.

This movie became the second-ever movie to cross the billion-dollar finish line (Titanic being the first back in 1997).

It was the final installment of the trilogy.

This is the highest-grossing James Bond movie of all time.

Some were skeptical of a "blond Bond."

Another entry from the Transformers franchise, this movie has a total gross revenue of $1,104,000,000.

It managed to break into the billion-dollar club by targeting international audiences.

A move which paid off, with over a third of the huge revenue coming from China alone.

This sequel to The Dark Knight was the thirteenth ever billion-dollar movie when it came out.

Many were concerned about the movie's success after the tragic Aurora shootings during a midnight screening.

With this movie, Disney achieved a record-breaking five billion-dollar movies in a single year.

This also makes it (perhaps surprisingly) the most fiscally success movie in the Toy Story franchise.

When this came out in 2010, it became Disney Pixar's highest-grossing movie of all time.

And this was likely the impetus for Disney to plan for the eventual fourth installment.

Back in 2006, this was the third film ever to gross over a billion dollars.

Though it took three months to hit that first billion at the time.

In spite of some initial naysayers, the movie earned its first billion in just thirty-nine days.

And at the time, it was the fourth (and last) film of 2016 to join this coveted club.

In spite of some online mockery, there's no denying this movie's commercial success.

And it was a part of Disney's record-breaking five billion-dollar movie year, too!

Of 4 Pirates of the Caribbean movies, 2 are on our list.

This makes it the second most successful of the 2. But still, nothing to be sniffed at!

This surprise hit of the year is the second of the franchise to gross over one billion.

For many, this relatively small movie is a shock addition to the list.

It took this movie a while (and a 3D rerelease) to get it over the one billion barrier.

The movie also wasn't originally released in China until its 20th-anniversary release.

This was one of two animated movies to gross over one billion that year (Zootopia being the other).

This makes the Finding Nemo sequel the fifth highest-grossing animated movie of all time!

This was the first of the franchise to hit a billion dollars - though it took thirteen years to get there.

Though like many of the earlier movies on the list, it took a rerelease to tip it over the edge.

Back when this movie crossed over the billion-dollar line, it was the sixth film ever to do so.

But the sequel had quite a disappointing run, coming in at just over a (paltry) two million.

This is 1 of 4 Disney animated movies to ever cross the billion-dollar mark.

The first of the Hobbit trilogy is the only one to have crossed over the billion-dollar gross revenue.

Compared to The Desolation of Smaug and Battle of the Five Armies, both of which have earned around 96 million. Close, but no cigar.

Many believed this Heath Ledger vehicle could have broken world records for the highest-grossing movie of all time.

But that wasn't the case.

The final item on the billion-dollar list just crossed over the threshold.

Could it take over others on the list and climb even higher?

What makes this even more impressive?

Some obvious entires, but some surprises, too, right? Want more movie content? Scroll on for the eleven best serial killer movies. Don't deny it - you're feeling curious!
20%