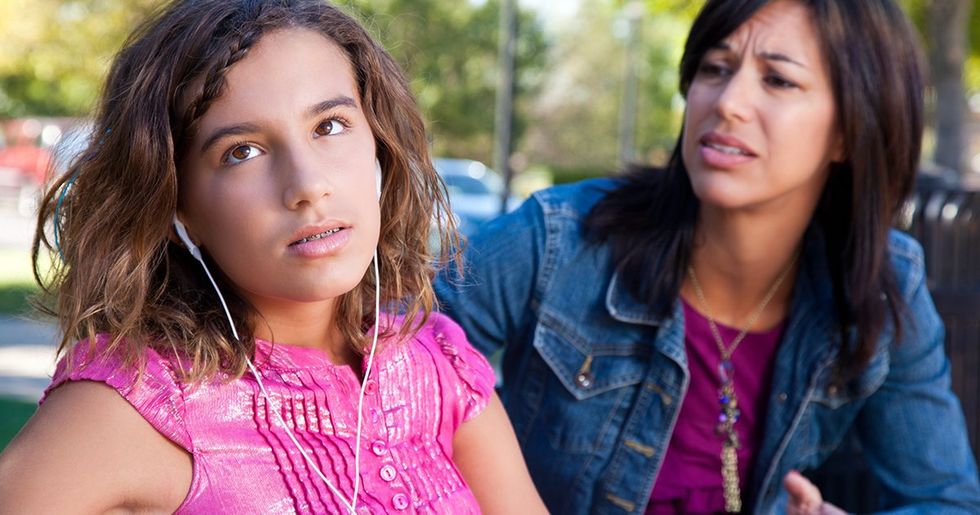 These Hilarious Tweets Share the Struggle of Parenting Tweens

Listen, there is so much content online about what it is like to deal with newborn babies. You can search "toddler" on Twitter and find droves of parents who can't wait to divulge all the trials and tribulations of parenting small children. Everyone knows that teens are basically the worst and parenting them is a nightmare. And yet, there is not much commiseration about what it is like to have a preteen.

Is that because they are easier to deal with? Heck no! Preteens have their own quirks and issues and it is just as hard to parent a kid when they are 11 years old as it is when they are three or 17. I will say that preteens, or "tweens," as some call them, are absolutely hilarious. They are smart enough to have some knowledge of the world but not smart enough to filter their thoughts like...at all. So when they're not complaining about their lives and being violently struck with hormones, they are absolutely hysterical.

Oh, just wait until your kid can run and perform complex motor skills but can't drive yet. You'll be driving them all over the world.

This is so true. If your mom likes something when you're a preteen, that must mean that it's actually vile.

If I am being completely honest, I 100 percent relate to and agree with this 11-year-old. They get me.

I remember my sixth-grade social studies teacher, an old man, lectured us about how we have to start wearing deodorant because we all smelled and he didn't want to smell us. Made us feel great.

You have to give credit where credit's due. These are things I have literally never thought about in my entire life.

If you think hope is dead then you must not have a pre-teen asking you every day for his own cell phone.
— MamaFizzles (@MamaFizzles)1486068652.0

This is so funny. It's like they think that one day their parents will just be like, "You did it! You asked me 300 times! Congratulations, you get a cell phone!"

Gosh, I'm the opposite. Sometimes I don't want to commit to the whole two-minute timed ordeal of the electric brush so I pull out my travel brush. Sorry, not sorry.

$58 for sweatpants is far too much to pay to be seen as cool and hip by your child. Take the loss and move on.

Shopping with a preteen

Trying to convince myself shopping with a preteen is fun but she got stuck in her dressing room and a little voice… https://t.co/pplTaBs9xF
— Jessica Watson (@Jessica Watson)1544236055.0

Oh, I can confirm that I was an absolute nightmare to take shopping between the ages of like, 5 and 25. Shopping with kids is the worst.

The awesome thing about having a preteen is that they make you feel like you have superpowers. Like the superpowe… https://t.co/FA05EEkWMS
— Beau Coffron (@Beau Coffron)1542412430.0

I can still see the glee in my parents' eyes every time they had the opportunity to embarrass me and my siblings, and I can't wait to do that to my own children someday.

Oh, I look back at 12-year-old me and definitely understand what this person is talking about. I was a good person, but I was insufferable to be around.

'If you're gonna run away, you'll need a sweater and better shoes' is something I just told my preteen as he stomped down the driveway.
— JennyPentland (@JennyPentland)1359251305.0

How many times did I march to the end of the driveway in a huff and then realize I had nowhere to go? So so many. And we had a long driveway.

As a kid, you know that "Did you brush your teeth/take the dog out/clean your room/etc.?" is just a precursor to a fight because you definitely did not do it.

At least they're all positive affirmations! It's so much better than hearing "No!" all the time.

Oh, every single parent says this when they have preteens. In fact, they probably shout it in their sleep.

Kids simply cannot remember to perform this basic function to save energy and like, the planet that they live on.

As if the answer will be, "Oh my gosh, no, hun! Take a shower whenever you feel like it! We're just leaving in five minutes."

I don't know about you, but when I was 12 years old, I made it my mission to see how late I could stay up every night. It made me really pleasant during the day.

I was first shown The Goonies at day camp on a rainy inside day when they put us on buses and took us to the local community college. I was probably seven or eight and it scared the pants off of me.

I like to send little notes in my kid’s lunchbox, like “Sorry the Wheat Thins are stale, that’s what happens when you leave the box open.”
— Amy Dillon (@Amy Dillon)1539001596.0

That! Is! What! You! Get! Learn to close boxes or eat stale crackers is a real fast life lesson.

This is the time when kids really start asking the tough questions and getting the tough answers that rock their world.

Oh, when you're 11 you get automatic admission to a bank called your parents' wallets, and it's great! I wish that was a thing as an adult!

When you are going through puberty, it's like the adults in your life can't fathom talking about anything else, and it's literally the worst.

This is the age when kids get evil and wily. They know how to push your buttons and they do it too well and too often.

I mean, she's not wrong. Sometimes preteens have the wisdom of people much older than them.

Tweens are vicious! They'll make fun of you for sounding old but then won't tell you how to not sound old!

Look, "the talk" is bound to be a traumatic experience for any kid. Best to rip the Bandaid off so they don't feel like they have to hide anything from you.

My wife and I just lipsynced the entirety of Bohemian Rhapsody and if you need my 12 year old you can find her unde… https://t.co/V1iBXefpSK
— Beau Coffron (@Beau Coffron)1535936474.0

I wonder if my parents tried this. It must not have worked because now we all sing it at the top of our lungs anytime it's on the radio.

Hey, the kid knows who he is. Can't argue with that. Physical activity is important, though. Maybe take the iPad for a walk around the house.

A preteen girl suffering is unlike any other suffering in the world. I know. I was there. Share this with someone who's parenting a preteen right now!