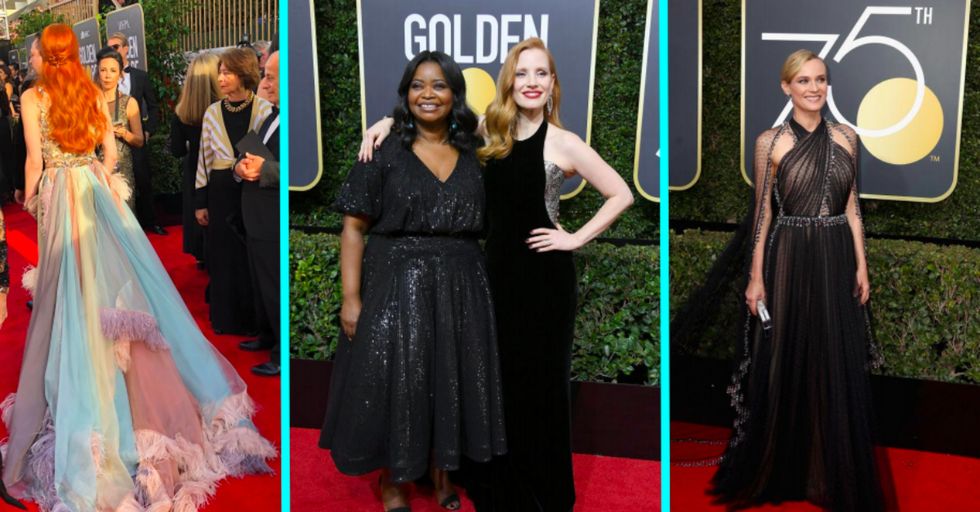 The memo was simple – wear black.

For months, Hollywood had been roiling with reports of sexual harassment and assault, and actresses and allies had banded together to create Time's Up, an initiative to stop sexual harassment – not only in Hollywood, but across many other industries, including hotels and farming. They also encouraged viewers to get involved.

In a short video posted via social media, actresses Reese Witherspoon, Brie Larson, Rashida Jones, Tessa Thompson and Kerry Washington stated:
"[We] know there’s been a lot of talk about actresses wearing black to the Golden Globes."
"But we’re only wearing black because we want to stand with you, our sisters across the globe. So we invite you to wear black with us on Sunday."
And wear black everyone did. It was a sea of black on the Golden Globes red carpet Sunday. Everyone was dressed from head to toe in the color, except for a few notable exceptions...
Get Out actress Allison Williams, one of the first arrivals on the red carpet, opted to have a pop of color on her black with this Armani Privé gown.

Another notable exception to the all-black theme of the night was actress Connie Britton, who opted to pair a black shirt with white lettering saying "poverty is sexist" with what appeared to be a slate grey skirt. People still loved the look, however.

This is Us actress Mandy Moore paired a bold red sash with her black gown, therefore disrupting the all-black theme, but it was still a dashing choice, however.
I, Tonya actress Margot Robbie brought the glam with this custom Gucci gown, which, while it was indeed black, had silver embroidery all through.

Margot Robbie, nominee for Best Actress Motion Picture Musical or Comedy for I, Tonya͛ @ITonyaMovie at the… https://t.co/iGOdMhK0Mg
— gucci (@gucci)1515420522.0

Another I, Tonya actress, Best Supporting Actress winner Allison Janney opted for a beautiful black and white ensemble and a bird on her shoulder. No, really.

French actress Isabelle Huppert, who you will remember from the brutal rape revenge-thriller, Elle, wore a stunning silvery-black piece that seemed to lean more on the silver than the black.

Alexis Bledel opted for bold (and glamorous) choices all around, when she wore this stunning black and white Oscar de La Renta pantsuit.

13 Reasons Why star Katherine Langford gave us a starry night with this black dress sprinkled with silver stars, which was also accompanied by stars in her hair.
Two actresses, however, didn't the memo. The most notable of them was actress Blanca Blanco, who, as Popsugar quipped, "has appeared in movies you've probably never heard of like Showgirls 2: Penny's From Heaven, Beverly Hill Christmas, and Bermuda Tentacles."

Actress Blanca Blanco didn't wear black to the Golden Globes — but shaming her is part of the problem… https://t.co/Ao4aMJsvzy
— René Domínguez (@René Domínguez)1515376295.0

Another Golden Globe holdout was Germany's Next Top Model winner Barbara Meier, who wore a frou-frou lilac and green concoction on the red carpet. In an instagram post, Meier wrote:

A lot of women will wear black tonight to support the time‘s up movement [sic]. I think this is a great and extremely important initiative. Nevertheless I decided to wear a colorful dress tonight. If we want this to be the Golden Globes of the strong women who stand up for their rights, I think, it’s the wrong way not to wear any sexy clothes anymore or let people take away our joy of showing our personality through fashion.

Another notable holdout was Meher Tatna, the president of the Hollywood Foreign Press Association, but she had a very specific reason for not wearing black.

As one source said;

While the president [of the HFPA] stands with and supports Time’s Up, she wore the dress that she chose with her mother. As part of her Indian culture, it’s customary to wear a festive color during a celebration — in this case being the 75th anniversary.

Furthermore, S. Mitra Kalita, VP of Programming at CNN, explained that Tatna “was born in India where this red IS our basic black." For this reason, we give her a free pass!

There was one notable holdout on the men's side of things, adorable Stranger Things cast member Gaten Matarazzo (in the middle), whose suit appears to be more of a navy blue or grey.

But honestly, it's close enough, so we'll forgive him. Also, did we mention he's the most adorable ever?