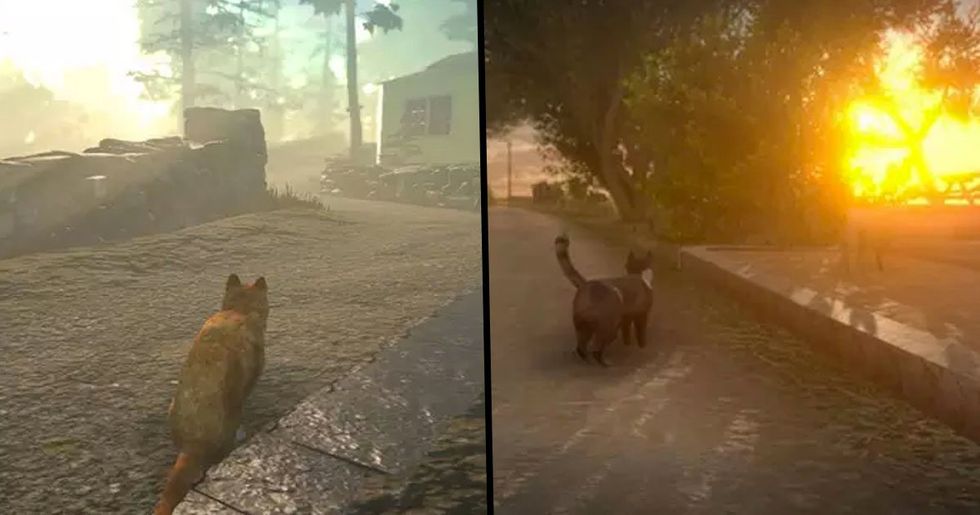 Okay, so I don't know about the rest of you two-legged chumps, but I certainly wouldn't mind ending a long day of tiresome human activities by sloping off into a cat world.

What was once a concept only achievable in vivid dreams, becoming a cat and wandering around the city is now a much closer reality.

Peace Island, a video game concept created by Eric Blumrich, promises to give users the opportunity to become a cat, navigate the island, and interact with other cats to solve puzzles and crack mysteries.

Read on to discover more about the game and check out the demo...

This really is a pretty sick game.

Peace Island is set to be available on all of your favorite devices.

The game is currently under development to be available for PC, Mac, and Occulus VR system.

Now, if there was ever a time to invest in VR...

Personally, I've never had much interest in getting a VR headset. I once had a go on one in a seaside amusement park and found the whole experience of having flying boulders plunging towards me fairly unpleasant. That being said, the appeal of fully immersing myself in Cat City and being able to escape my own humdrum reality for that of a mystery-solving cat out on Peace Island has got me reconsidering my position.

This open-world, story-driven action game is not only going to provide its gamers with an immersive and eye-pleasing experience, it will also give them challenges that spur the game forward and give the game a brain-teasing edge.

What's the plot of Peace Island?

Creator, Eric Blumrich explains that: "The story - a mix of science fiction, alternative history, and mystery - unfolds from the perspective of the nine cats who call the island home, when they wake up to find their human companions gone."

I don't know about you, but I spend most of my time on GTA swimming, flying helicopters, and trying to find the most pimped-out ride, avoiding the chaos and fighting at all costs... Blumrich stated, "Peace Island is an interactive story-driven experience which will focus on discovery and exploration, rather than combat."

I think that Eric Blumrich's concept might just have saved a generation of teenagers from violence and crime - this game should get federal funding.

Discover the human race through the eyes of a cat...

Blumrich's game will include hundreds of secret documents and artifacts left behind by the humans, providing a history-timeline spanning over 200 years for you to discover throughout the game. How cool is that?

You won't be alone.

The game is not every cat for themselves, or every animal for themselves, for that matter. Peace Island will encourage you to interact with other animals and you will need to join forces with your cat gang (made up of the other nine cats on the island) to "secure your future."

You will begin your journey on Peace Island as "Elizabeth." Here's an extract from the original setting-the-opening-scene transcript: "Elizabeth hasn’t had the best of days. It began with being gently shoved into the big plastic box that usually meant a trip to the doctor. She made her opinion about the situation well known as she was carried away. The anticipated pokes and prods never materialized, thankfully enough, but it was loud, and bright, and noisy outside of her tiny confines. Fortunately, the box was lined with her favorite blanket. Her occasional protestations were met with a steady stream of reassuring murmurs, and generous treats shoved in-between the shiny bars of her temporary prison. The ever-changing tableau of alien color and shape outside faded as a grudging sleep overcame her. She was with her human, after all. As long as they were together, she knew she was safe."

But then things take an unexpected turn...

"When she awoke sometime later, the door to her cage was open. Any fear of the unfamiliar was banished, when she caught the scent of fresh food, just beyond her confines. Yet- the apartment she finds herself in is silent. Her human is nowhere to be found, and the unfamiliar sight of an open door beckons. She would rather stay inside, but she can hear the cries of one of her kind, just outside." Thus begins the story of Peace Island.

All of the cats featured are inspired by cats that Eric has encountered.

Which one's your favorite?

I'm going to have to go with Sushi the boat cat. Cats are typically terrified of water, so that must be one mighty brave kitty cat. I wonder how much we will get to interact with Sushi!

Eric promises that there will be a lot to explore.

The game promises that the Island will be no small affair: "It will feature a large game world- including four distinct communities, woodlands, scenic coastlines, secluded farmlands, crumbling WW2 ruins, and much, much more."

With over fifty-accessible structures on the Island to explore...

The number of places for your cat-like self to explore reaches exciting heights on Peace Island. Gamers have been told that they will be able to wander freely around "homes, studios, offices, abandoned factories, victorian-era mansions, and no less than three museums."

Hanging out in a museum as a cat, you say?

Aesthetic is very important to the developers over at Peace Island.

The team declared that "emphasis is being placed on aesthetics - Peace Island will be a place you will want to visit time and again!"

You will experience day and night cycles during gameplay.

There are so many cool features on this game that I could just go on and on...

Like how the game offers the player a series of multiple divergent storylines throughout, leading them to the final decision: “Are the humans worth bringing back?" I know! They're also offering people who donate to the project's Kickstarter the opportunity to have their actual real-life pets commemorated in the graveyard... like whaaat?!

This game still needs some money and time to become a reality.

Originally, Blumrich aimed to get the Beta game out by February 2019, but has had to push that back. If you want to keep up to date with the project or to donate, you can do so here!

Peace Island really is something to get excited about.

Click here to check out this sneak peek demo to get a better idea of what you can expect once the game is finally released. Pretty cool, huh?