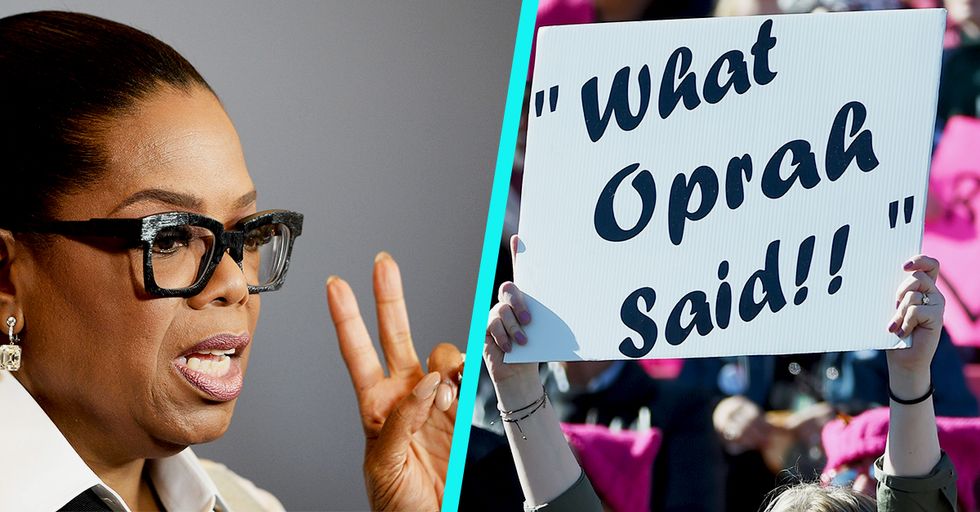 It was only 20 days ago when Oprah Winfrey inspired the liberal hearts of America into believing she would be their saving grace and perfect candidate to run against President Donald Trump in 2020. Well, according to InStyle Magazine, not to be confused with In Touch, the publication currently trending for their 2011 interview with Stormy Daniels -- Winfrey is not interested in running for the highest office in the nation, explaining that she doesn't "have the DNA for it."

The most presidential speech of the past 12 months.

In case you've been living under a rock for the past few weeks, on Sunday night, January 7th, Oprah Winfrey became the first Black woman to receive the Cecil B. de Mille Award at the 75th Annual Golden Globes. In her speech, she rallied all of those watching with her words of inspiration and empowerment, touching on hot-button topics like racism and sexism.

The entire speech can be viewed above, but a few of the quotes that led many to begin posting "Oprah 2020" across various social media platforms included:

"What I know for sure is that speaking your truth is the most powerful tool we all have. And I am especially proud and inspired by all the women who have felt strong enough and empowered enough to speak up and share their personal stories." "For too long women have not been heard or believed [when speaking their truth], but that time is up." And... "[We need to] maintain hope for a brighter morning, even during our darkest nights. I want all the girls watching here and now [to know] that a new day is on the horizon."

Turns out it wasn't a speech to kick off her presidential campaign.

Speaking with InStyle Magazine three weeks prior to the speech that sparked the nation, Winfrey was asked about the concept of "Oprah 2020" to which she responded: "I've always felt very secure and confident with myself in knowing what I could do and what I could not. And so it's not something that interests me. I don't have the DNA for it. Gayle--who knows me as well as I know myself practically--has been calling me regularly and texting me things, like a woman in the airport saying, 'When's Oprah going to run?' So Gayle sends me these things, and then she'll go, 'I know, I know, I know! It wouldn't be good for you--it would be good for everyone else.' I met with someone the other day who said that they would help me with a campaign. That's not for me." And just like that, millions of American's hearts broke.

Now that she's said, "I don't have the DNA for it" and "that's not for me" in response to running for president in 2020, the pollers over at CNN were still curious — could Oprah beat Trump in a 2020 election?

Well, according to a new poll, in a hypothetical vote where Oprah and Trump were the only two candidates, the numbers are currently in Winfrey's favor with a 51% to 42% divide. Just a little more food for thought Gayle can pass along to Oprah over the next year. In the end, does it help that Oprah said all of those deterring quotes before her viral Golden Globes speech? Sure. Does it mean that she absolutely won't run? Maybe not. But as of now, I think it's time to start looking for a new dream candidate for 2020. Because as a wise woman once said, "A new day is on the horizon!"