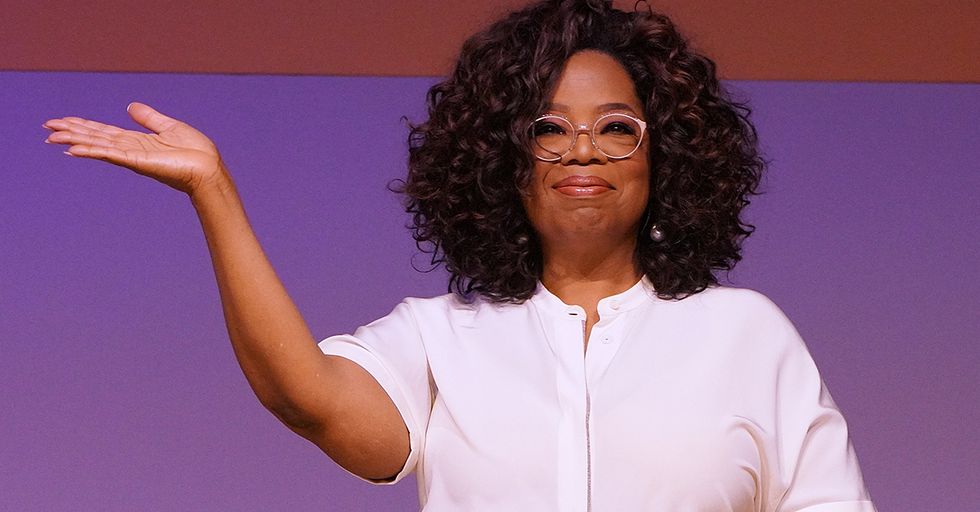 Oprah is one of the biggest stars in the world. She revolutionized television with her empathetic approach to storytelling, changed the cultural landscape, was integral to securing the nomination of former President Barack Obama, donates millions to charitable organizations, schools, and nonprofits through Oprah’s Angel Network, runs the country's largest book club, and so much more.

Oprah works incredibly hard. But this week, we learned she parties even harder.

On her Girls’ Getaway cruise, the mogul invited friends, family, and fans to celebrate her birthday with a three-day party at sea. They laughed, they cried, they meditated, and according to a legendary Instagram video, they also got a little tipsy too.

In the video posted by the TV queen herself, Oprah is seen delivering a few dozen tequila shots to cruise attendees, in her pajamas. As soon as the video hit the Internet, a resounding “mood” could be heard across social media platforms.

Everyone knows that Oprah is the Queen of all things media-related.

Best known for her groundbreaking talk show The Oprah Winfrey Show, the multi-billionaire has often been called the most influential woman in the world.

Actress, talk show host, producer, media executive, philanthropist… Oprah does it all, and essentially invented the beloved TV personality role that so many replicate on daytime television today.

The woman is an icon.

From her infinite list of accomplishments to the myriad of unforgettable moments on her daytime talk show, Oprah Winfrey’s impact on culture is indelible.

There was the time she professed her undying love for bread.

A longtime Weight Watchers spokeswoman, Oprah shared her passion for carbs and her secret to having it all – and by all, I mean pita, baguette, ciabatta, bagels.

Or when Beyoncé taught her the Bootylicious dance.

And we learned the official definition for Bootylicious was, “beautiful, bountiful and bounce-able."

Remember when Oprah proved she was stronger than all of us mere mortals?

Name one other icon to ever walk barefoot over hot coals for their fans. I’ll wait.

Or when EVERYBODY GOT A CAR??

In 2004, Oprah gifted all 276 audience members a brand-new Pontiac G6s, and made history with a phrase that will forever mean, “I’m the boss."

Oh, there was that one time she casually walked $2 million into the local bank.

And then laughed about it with Ellen DeGeneres like it was the most relatable thing in the world. You know, no big deal.

You might not know about how Oprah transformed the beef industry.

The mogul got word about some of the stomach-turning practices at U.S. cattle ranches and exposed them on a historic episode of her show that drove down beef sales and changed industry law for good.

I’m sure you remember the infamous couch-jumping incident.

Tom Cruise couldn’t “be cool" when he took to Oprah’s couch for a manic profession of love for Katie Holmes in 2005.

The icon officially put her support behind Barack Obama in 2007, and her seal of approval was considered a significant factor in the former president’s eventual win.

Although she no longer graces us with daily wisdom on The Oprah Winfrey Show, Oprah is obviously still an icon.

I often think about the time Oprah did a cooking segment with a woman whose chicken recipe won $1 million, and Opra… https://t.co/7Ln64man3Z
— Spencer Althouse (@Spencer Althouse)1544315857.0

Even long buried segments from her show continue to make headlines, like the moment Oprah tried to be nice about some painfully under-seasoned chicken.

In 2008 she transformed the TV landscape again.

This time with her own original channel, the Oprah Winfrey Network.

And she made some time for the big screen too.

In 2018, Oprah starred as the celestial being Mrs. Which in the gorgeous film adaptation of A Wrinkle in Time.

Well, the Internet can rejoice because Oprah just gifted us with another iconic moment — handing out shots on her birthday.

Oprah makes the exact same face whether she is giving away shots or brand new cars, and that’s beautiful.

On a private cruise with a bunch of fans, buying everyone tequila shots.

While her actual birthday was late last month, the mogul waited until last week to celebrate in style.

Oprah hopped aboard a three-day “Girls’ Getaway" cruise with her bestie Gayle King and a bunch of friends, family, and fans in tow.

But when the sun went down the raging began.

Oprah shared a video of herself partying in pajamas, which is actually the dream.

The video shows Oprah floating through her party like a tequila bearing party angel, urging guests to get absolutely wrecked.

Her caption reads, “I’m not throwing away my shot! Thanks to every mother-daughter-sister-friend-cousin-niece-companion-partner who joined us on the #Girl’sGetAwayCruise. #OmagonHAL #pajamaparty." The hyphens? The hashtags?? I’m FLOORED.

Obviously, the BFF Gayle was right by her side.

And Instagramming every iconic moment the way only a best friend can.

Yeah, it pretty much sounds like the best weekend EVER.

Doing shots with Oprah is a dream I never knew I had.

Of course, a lot of people made the same joke.

I mean, giving amazing gifts away is just kind of her thing!

But everyone was deeply here for it.

That video of Oprah passing out tequila shots in her pajamas is exactly what I needed to get through this week. #inspiration
— David Hopping (@David Hopping)1549297484.0

Oprah’s generosity extended beyond that cruise, and onto the Internet where the video is inspiring Twitter.

Even those trying to abstain couldn’t help but feel the love.

Because when Oprah hands you a shot, you drink.

The video captures what Oprah does best.

Giving us the solutions to our problems, which can sometimes mean a wild night that makes you feel alive again.

Mostly, we’re just really happy to see Oprah have fun on her birthday.

@oprahmagazine @Oprah This is so Awesome. And besides being a “living legend” in my opinion, it’s just great to see… https://t.co/nYWE6NKgNl
— Antony Rosellini (@Antony Rosellini)1549297988.0

After all she’s given us, the woman deserves it!

But attendees loved every single moment of the Girls’ Getaway cruise.

Oprah has given us so much over the years.

And now she’s given us the most perfect TGIF mood in history.