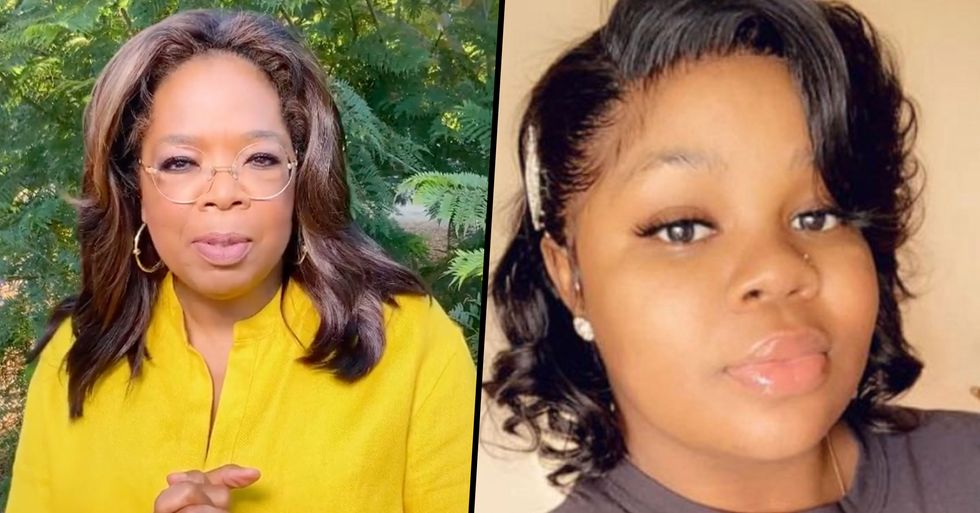 It's been over 4 months since Breonna Taylor was shot dead while asleep in bed, and as people continue to demand justice, Oprah has taken a stand of her own...

Oprah has once again spoken out about Breonna Taylor's death.

And her next act is set to help bring even more awareness to the case.

When 3 police officers shot her 8 times in her own home.

A happy and proud woman who worked as an emergency medical professional.

But there's one thing that made her stand out from us.

She was a Black woman. In America, being a Black woman means you only earn half the respect of your white female counterpart, and only a quarter when confronted with a white male.

In the most bittersweet form, she only received the love she deserved after her death.

A woman who put her life on the line every single day to help others in a profession that aids this country massively, could only receive the respect she deserved after she was brutally murdered.

Maybe the police officers would have thought twice about it if they could see her badge.

But all they saw was Black. And that's all it took for them to fire more than twenty rounds, 8 of them tearing through Breonna's flesh.

It all started in the early hours of March 13th.

That was the morning when 3 plain-clothed police officers broke into Breonna's home while she was asleep in her apartment in Louisville, Kentucky. Her boyfriend, Kenneth Walker, was asleep peacefully next to her.

But he was woken up by what he thought was a violent break-in.

The officers had allegedly received a tip-off that they were going to be involved in a drug raid, so executed a "no-knock" search warrant which involved breaking into their home.

Without announcing their arrival, Walker believed a home invasion was taking place.

So with a fully registered gun in his hand, he shot at one of the officer's legs and that led to a barrage of bullets firing at both Walker and Taylor who was immediately killed. They had the wrong house.

However, the charges were dropped after further investigation conveyed negligence on behalf of the police officers.

The officers even claimed that they did announce their arrival.

But Breonna's family and a neighbor rejected those claims stating they were false as no shouts were heard until the door had been broken down and the shots were fired.

Rather than opening an investigation into the fatal incident...

The Louisville Police Department disregarded the case as nothing but a mistake, and none of the officers faced any sort of consequences for their actions.

This careless behavior has been happening for decades.

2 months after her death, Breonna's family filed a lawsuit.

On May 21st, over 2 months after Breonna had died, her family took action. Breonna's name started circulating all across social media in yet another #SayHerName campaign which helped them find the confidence to file a wrongful death lawsuit.

Louisville's city council voted unanimously, 26-0, in favor of banning the controversial law and re-named it in honor of Breonna. Her mother said it would "help save lives" the way her daughter intended to do as she was studying to be a qualified nurse.

Just over 100 days after she was killed, one of the officers, Hankison, was officially fired from his position.

But the other 2 are still on administrative leave.

This week, Oprah Winfrey has been demanding justice for Taylor.

The host had already placed an image of Breonna Taylor on the cover of her popular O Magazine, just a couple of weeks ago.

“Breonna Taylor. She was just like you," she said in an announcement.

"And like everyone who dies unexpectedly, she had plans. Plans for a future filled with responsibility and work and friends and laughter. "I think about Breonna Taylor often. Imagine if three unidentified men burst into your home while you were sleeping. And your partner fired a gun to protect you. And then mayhem."

"We have to use whatever megaphone we have to cry for justice. And that is why Breonna Taylor is on the cover of @oprahmagazine. The September issue honors her life and the life of every other Black woman whose life has been taken too soon."

The star has filled Louisville, Taylor's hometown, with billboards demanding the arrest of the cops who shot her.

There will be a total of twenty-six billboards across the city - one for every year of Breonna's life.

They're expected to be completed by Monday. If you want to educate yourself just that little bit more on the issue, then keep scrolling.
20%

$27.99 $22.39
Buy Now
See More Deals
We hope you find these deals as awesome as we do! Just an FYI: we may receive a share of sales from links on this page