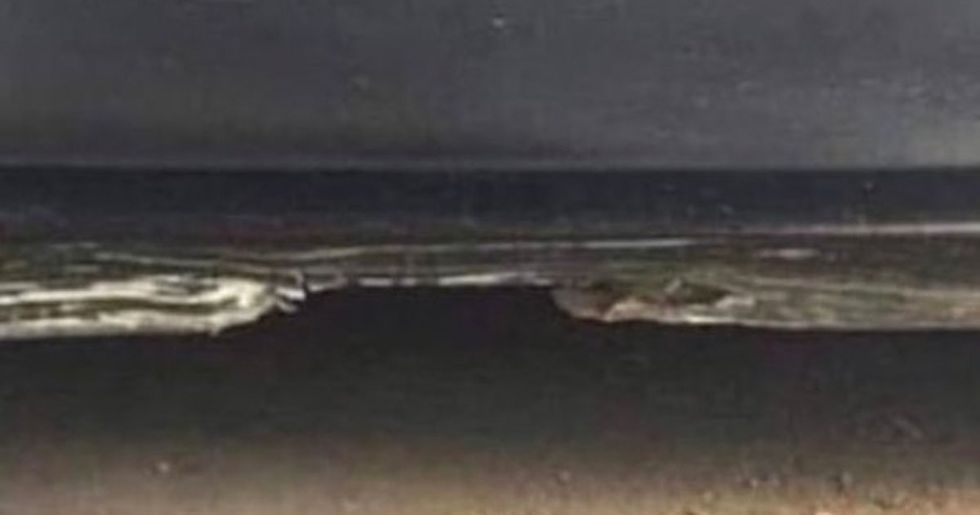 There's nothing quite like an optical illusion to get the whole internet talking - and collectively scratching their heads... Remember the good old blue-and-black/white-and-gold dress? For some reason, a little trick of the eyes is something that really unites us all - perhaps because it's the sort of internet content that anyone can get involved in.

But the latest optical illusion to take the internet by storm may be one of the most confusing yet. A Twitter user has shared an image of his car door - or so he claims. Many who've viewed the image remain convinced that it's an artistic shot of something else entirely, namely, a beautiful beach scene. Which do you see?

Scroll on for a better look at the pic and to see the best of the internet's reactions.

There's something about the way that they can disrupt our sense of reality that makes us feel incredibly uncomfortable.

And they're always popular online.

While a lot of internet content seems to be a little problematic, controversial, or divisive, it's nice to be able to all agree on something.

Just to sit back and enjoy something weird.

Like this bizarre picture in which at least one of the girls appears to have no legs.

Or what about this infamous image?

This picture was originally shared on Instagram, and people went wild, questioning whether it showed some super greasy legs - or some expertly placed white paint.

For some reason, the feeling of confusion is strangely pleasant.

Perhaps it feels nice to give up control and admit that the world is just weird and crazy.

Although that isn't always the case.

Sometimes, a particular optical illusion will come along that just sends the internet crazy - and not in a good way.

One such picture has gone viral this week.

It all started (as these things do) innocently enough. One man shared a snapshot of a beach scene on his Twitter.

Or so the internet would have us believe. Twitter users soon realized that this was far from an ordinary beach shot.

It was quickly revealed that all was most definitely not as it seemed.

The picture wasn't of the cute vacation variety. In fact, it was of something far less glamorous - and far less conventionally attractive.

Here's the image that's got everyone talking.

At first glance, it very much looks like an image of a beautiful beach scene. We can definitely see it!

Specifically, that the image was of a car door rather than a beach scene - although many on the internet remain unconvinced.

The news freaked some out.

We have to admit, it's a little disconcerting to go from being totally sure of what you see, to all of a sudden having the carpet pulled out from under you.

There was an explanation offered.

The Twitter user, known as Nayem, claimed that the two different views could be attributed to different types of people - logical vs. artistic.

He claims that you can train yourself to see the other view of the illusion, by focusing your attention on one specific part of the picture.

Some found this explanation flattering.

@nxyxm Either I'm very artistic to see the beach and sky or whoever took this picture has a very good aesthetic sen… https://t.co/ukbPMhh8z8
— Rabiya.Khan (@Rabiya.Khan)1562088395.0

It's nice to think of yourself as artistic - and, if an optical illusion can prove that to you, all the better!

Apparently, the distinction between seeing a beach or a car door is a way to distinguish whether you're predominantly ruled by the left (logical) or the right (creative) side of your brain.

Some still can't see it.

One Twitter user specifically asked for another image taken from a distance in order to help them to get a grasp of the image as a whole.

Although that wasn't the only reaction.

There are others on Twitter who are totally convinced that the image is a hoax and isn't an "optical illusion" at all.

And some are actually a little annoyed.

Either way, we can all agree on one thing.

Optical illusions are a pretty interesting way for us to try to understand the workings of our brains - and gain new perspectives from others, too.