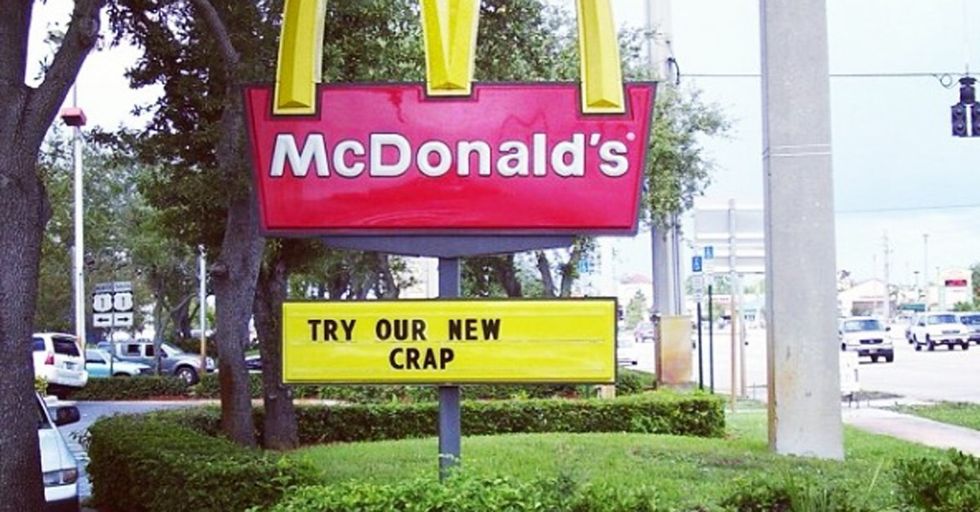 Advertising is very important for fast food places because there are roughly 2,352,405 different places you could go — give or take a few fries — so they need some kind of hook to get your business.

For many, those are the signs outside their establishment. And while some are quirky and clever, others are...well, fast fails.

Whether it's an ill-advised message or simply an unfortunate spelling error, let's just say you would probably keep on driving right through.

Get Jiggy With It

Now this is a story all about how, my lunch got flip-turned upside down.

Now I'm no doctor, but I'm thinking that's probably not the way to go about beating diabetes. However, that is a pretty great deal.

First of all, we can see the obvious and glaring error. But more importantly, how do they run out of meat?

I Scream, You Scream

If the kids are old enough to read the sign, I'm thinking Dad is in trouble. Who wants a Dilly bar or Blizzard?

Let's hope that's a typo and not a statement about how worthy a certain sandwich combination is for every male body part. Than again, they do have the meat.

Well, I guess that's one thing you can do there. However, it's usually the result after eating the food.

Lettuce tempt you with a position behind the line making some good dough. Nacho typical job, that's for sure.

G...what's missing here? We'll give you one guess.

Short, sweet, and to the point. If not also a little bit corny...

But now you're intrigued, right? What is so "wow" that you have to come in? Pretty sneaky, McDonald's.

Putting Out the Call

But they won't discriminate. If you're not yet heavyset, they can work with you to make that happen.

Forget the Burger King. When SpongeBob makes an appearance, who can pass that up?

I was a bit confused as to what an establishment named "Burger King" might be offering, so it's a pretty good thing they cleared that up.

I'm not even sure what that's supposed to be. America runs on Dunkin', but apparently Dunkin' doesn't run on spelling.

Not Ifs, Ands, or Butts

Is there a shortage of "Gs" out there we don't know about? Then again, maybe those billions served just have some really strange tastes.

I'm glad that they're focused on providing a pleasurable experience, but I really don't need to know about how well-endowed they are. Just my McFlurry, please.

What kind of signal can you get with chicken "fajiata" taco Wi-fi? Can we get the password, and possibly a dictionary?

Let's just say it's not all smoke and mirrors. Anyone else have the munchies?

What? I specifically came here for my boy toy. Do you have any beef cakes you could substitute?

And that would be their grammar. However, they do got fish, so there's that.

This is a very specific position, as one must be able to confine their bodily functions to a specific time of day. Timing is everything.

They're talking about sandwiches, of course. What else were you thinking about?

Sure, it's spelled wrong, but it's still fun to imagine a bunch of tiny amphibians going home as pets for only $1. (To a good home, of course.)

Not the Breast Idea

They're not even pretending it's a typo here. I imagine they're currently hiring someone new to do their signs.

Do you want to supersize your crap? How about a McCrappy meal?

Eat fresh and freshen up when you're done. Who can pass that up?

Is this an error or simply truth in advertising? Finger lickin' good!

I'm thinking that won't be great for the health inspector. But then again, billions and billions served!