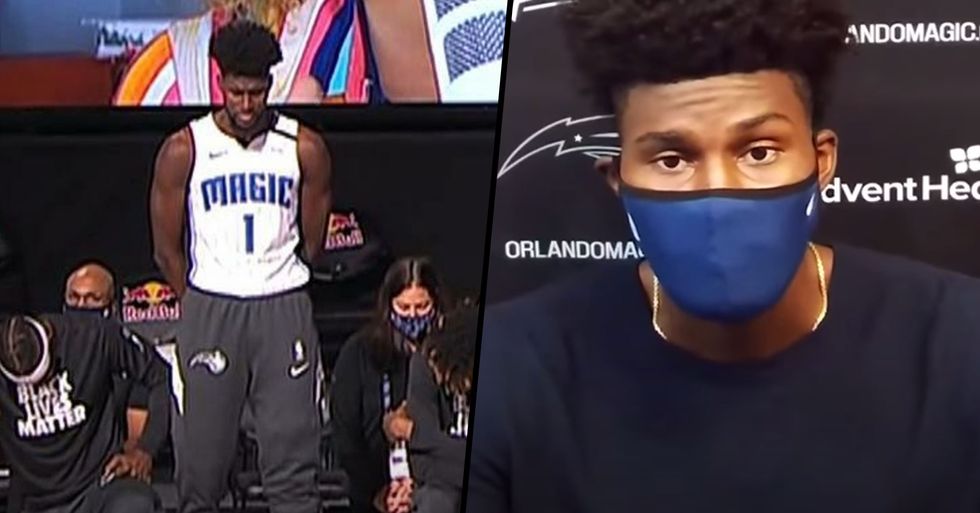 The United States is built on freedoms that make it one of the best places to live on earth. But recently, the cracks in the foundations are beginning to show. The whole world has noticed flaws in the way our country is governed and with every bit of news released, we can't help but get more and more disappointed.

So it's no wonder why people have decided they want to stand against these flaws. We've seen our fair share of public protests and we might as well add this one to the list. But one man decided he wasn't going to take part in the political statement, and he has his reasons why...

Political statements can be made in so many different ways.

From violent protests to peaceful marches to online forums, political statements have been a long-standing part of American history.

And none have been more impactful than taking "the knee."

In sports, it seems like the best way to stand against the harmful values of the country is to take the knee during the national anthem.

What is taking "the knee?"

Well, this method of protest is a public political statement wherein one kneels down during the national anthem or during the raising of the country's flag. And before you go crazy over the "disrespectful" action, let me explain to you why it occurs.

In 2016, NFL legend Colin Kaepernick decided he had had enough.

The footballer first established the birth of this political protest during the Super Bowl. During the national anthem, Kaepernick decided he would sit on the bench to make a statement against the cruel treatment against African American citizens.

However, just sitting on the bench seemed to go unnoticed...

It didn't make as big of an impact as he had hoped. So instead, he decided to take things one step further. Rather than disappearing behind the crowds, where no one would bat an eyelid, he decided to publicly kneel down on the ground during the entire length of the anthem.

And obviously, that did not go unnoticed.

Fans watched him and wondered what he was doing. And as time passed, more and more footballers joined in with the peaceful protest to show solidarity.

"Why are you kneeling?"

When asked, this is what Kaepernick had to say: "I am not going to stand up to show pride in a flag for a country that oppresses black people and people of colour," Kaepernick said in a press conference after first sitting out during the anthem. “To me, this is bigger than football, and it would be selfish on my part to look the other way. There are bodies in the street and people getting paid leave and getting away with murder."

People were divided, to say the least.

On one hand, we had those who believed that the footballers were being disrespectful to the flag - by kneeling, it meant that they were standing against the country.

While others believed that it is a movement that needs to be recognized.

For those who could empathize with why Kaepernick started this protest in the first place, this was the chance to get their voices heard. Someone, who had a massive platform was finally speaking out for their rights. It was not meant to be a disrespectful middle finger towards the country as a whole, more so the harmful way it is being governed.

But there have been people actively promoting the knee as "anti-American."

Trump seems to have made the whole situation worse and because of his comments towards the NFL, more footballers are now deciding to take the knee as a way of showing him that they will not be silenced.

And we should not be adding or taking away from the movement.

I see so many people ignoring the hierarchical problems in the States. You can ignore the problem as much as you want, but that's what got us here in the first place. Race defines people in the country and you'd be blind to think otherwise.

That is why we needed the knee.

Police brutality has been a constant part of American culture but you've probably not realized because you're not black. And recently, things have reached boiling point again.

Thousands of videos have emerged, showing just how cruel police are towards young, black boys.

Over the past couple of years, multiple numbers of young, black boys have been shot by the police in very common misconduct cases and most of the investigations into their deaths have been closed with no charges pressed against the criminals AKA the police.

And it seems as if things aren't getting any better for the United States.

With multiple killings taking place in the past few months, the cracks in the country are only getting deeper.

That's why people are continuing to protest peacefully by implementing the knee.

But at a basketball game, while his team, including all the referees and coaches, kneeled for the entirety of the national anthem, Jonathan Isaac decided he was going to stand. But this story has a very horrifying twist at the end.

It shocked us all, that's for sure.

Fans were left disappointed by his display during Friday's game against the Brooklyn Nets.

But he has his reasons for doing what he did...

At a press conference after the game, he told the press that his religion was the reason for his "controversial decision."

He continued after he kept getting asked why he chose to stand:

"I felt like it was a decision I had to make, and I didn't feel like putting that shirt on and kneeling went hand-in-hand with supporting black lives."

"For me, my life is supported by the gospel of Jesus Christ. All lives are supported through the gospel."

He reiterated that religion was the way forward.

"That, at the end of the day, will help us see our mistakes in a different light," he said. "It will help bring us closer together and get past skin color. And get past anything that's on the surface and doesn't really get into the hearts of men and women."

The DeVos family, which owns the Orlando Magic team, also released a statement in support of the protest during Friday's game:

"The DeVos Family and the Orlando Magic organization fully supports Magic players who have chosen to leverage their professional platform to send a peaceful and powerful message condemning bigotry, racial injustice, and the unwarranted use of violence by police, especially against people of color," it read.

But the scariest part of this whole story is how it all ended...

In the most uncomfortable of moments, on Sunday, during the team's next game against the Sacramento Kings, Isaac ended up with a severe knee injury during the fourth-quarter of the game.

It was so bad that he had to be wheeled off the court.

The future isn't looking too good for the twenty-two-year-old as the recovery time for an injury of the sort is around one year. Only a miracle would help him get back on the court.

Isaac had just recovered from a previous knee injury.

He has sat on the sidelines before, but this tragic accident has occurred during the worst period for the team as the NBA season has just kicked off. Typically games would not be played during August, but due to the coronavirus pandemic, things had to be adjusted accordingly.

And of course, the internet had mixed reactions to the news.

Some were confused with what had transpired.

Others poked fun at the "All Lives Matter" gang, even though Issac is a supporter of equality.

I mean, it's awkward, to say the least.

It's honestly so strange...

But we're sending our prayers to the injured player.

If you’re celebrating Jonathan Isaac’s injury there’s something wrong with you
— NBA All Access (@NBA All Access)1596414045.0

It's just plain cruel to mock a young and upcoming player, especially when his entire career is on the line.

We hope he recovers as soon as possible.

There is something seriously wrong with the people making fun of Jonathan Isaac’s injruy Prayers up for Issac.
— Hoop Central (@Hoop Central)1596414160.0

In the meantime, keep scrolling to read more about why the BLM movement deserves our support...