Our Robot Overlords Are Here, and It Turns Out They Fold Laundry | 22 Words 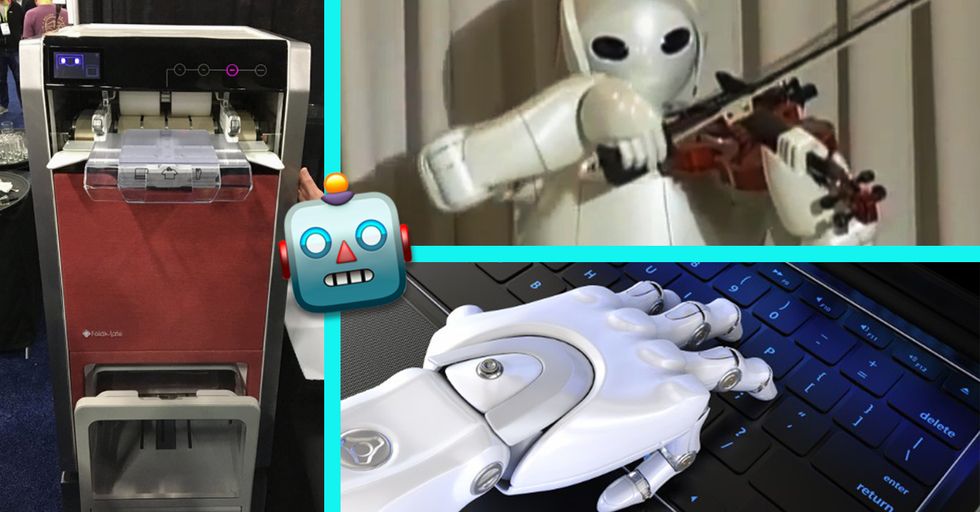 Our Robot Overlords Are Here, and It Turns Out They Fold Laundry

If you're afraid of robots — I get it.

You've seen I, Robot and Ex Machina and Westworld and seen for yourself that robots are bad. Now every time you watch a trailer for a new film featuring robots, you cry out, "They're coming for us!"

Well, you're not wrong. They are coming for us.

But that's a good thing. I'm telling you: It's time to quit messing around and just accept our robot overlords already.

In case you missed it, there is now a robot that will fold your laundry for you. See it in action here:

Look at that! It is actual magic. The FoldiMate robot will be available by the end of next year for a very reasonable $980. All you have to do is clip clothes and towels into its adorable little hands, and the machine does the rest. A few moments later, you have a neatly folded pile of laundry that's ready for you to put away. (Until you also have a robot to do that.)

Or maybe you hang up your clothes! There isn't a robot for that...

...Yet. But the company is clearly interested in possibly working that into the next generation of FoldiMates. Because that's how science works: We see a problem and we solve it.
Now if you ask me, this laundry-folding robot is a very good robot. But if you ask the rest of the world, it's a sign of our demise. Society as a whole seems to be pretty anti-robot. I, for one, think that it's time for that to change.

Consider this a bit of a wakeup call — much like this one provided by another good robot:

Robots are humanity's natural response to problems that exist in the world. There are robots doing amazing things like helping doctors perform surgery and delivering much-needed supplies to people in need.
In addition to literally saving lives, robots are also just really, really cool. The laundry-folding FoldiMate isn't the only awesome housework-centric robot you should welcome into your home. There's also the Zipperbot!

The Zipperbot will zip your clothes up for you!

In the future, all of our clothes will be made of space-age fabric that has to be zipped together (probably). What are you gonna do, zip it yourself? No way! You're gonna use the Zipperbot, obvs.

Are you gonna vacuum your home in the future? No! You're gonna use a Roomba.

Roombas are already widely available, but if we'd all just accept the fact that robots are here to stay, we could all stop vacuuming forever!
Think of all the things you can do with your life while you're not vacuuming. You could take a bath or take the dog for a walk. Unless...

...Your dog is a robot that walks itself.

That's right, there are robot dogs. And these dogs don't even actually need to go for walks because (duh) they don't poop. Although you are definitely guaranteed to get mad street points if you walk your robot dog outside while wearing your jacket made of zippers. That's just a fact.
And dogs aren't the only family member you can replace with a robot. Do you wish you dad played catch with you more often? Well, you're in luck.

'Cause there's a robot for that.

And you thought the ability to throw an object with any kind of power was a trait unique to humans and monkeys. Now you can get a robot dad to play catch with you in the backyard while your robot dog runs around and another robot vacuums your house for you. If that's not progress, then I don't know what is.

Remember when Watson the computer competed on Jeopardy!?

And he won? Ken Jennings (a very smart man) said that he welcomes our robot overlords. If Ken Jennings is ready to hand over control of the entire universe to robots, then who are we to judge?

Now, I know what you're thinking: What about the arts? No problem.

This robot plays the violin. Can you play the violin? Other robots have already learned how to compose and play their own songs.
In the future, we're going to have musical groups composed solely of robots playing their own robot tunes. And we're going to love it.

Some robots have even already mastered the art of writing.

In 2016, a Japanese AI program wrote a short novel which then passed the first round of screening for a national literary prize — for humans. A book written by a computer did better than many books written by real humans. Look, all I'm saying is that it's only a matter of time before robots take over. The revolution has already started, and it's not going to wait for us. We're better off just accepting it and enjoying a world where we no longer have to zip our own zippers.