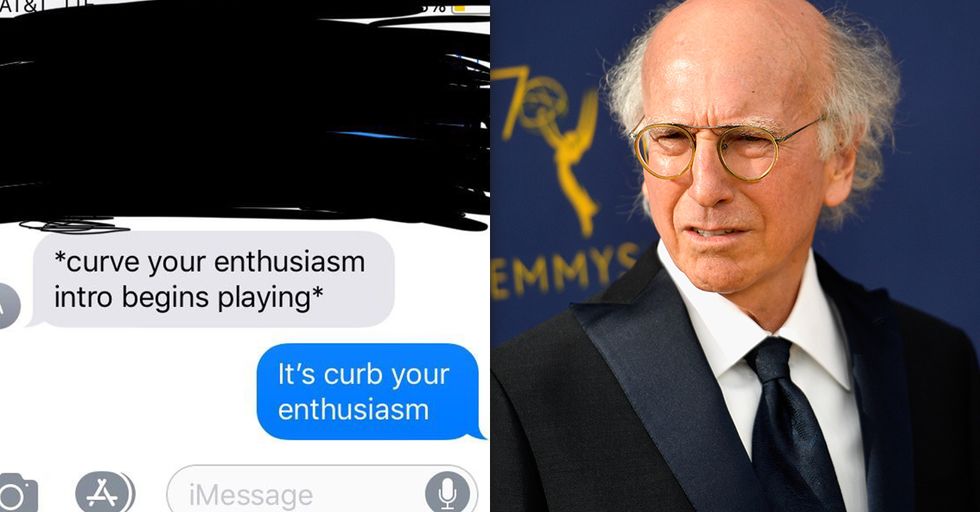 I don't know about you, but I'm a bit of a grammar and spelling nerd. I love the stuff. I came in sixth place in my fourth-grade spelling bee because I mixed up the order of the "i" and the "e" in the word "ancient." You better bet I have never misspelled that word ever again.

So when I see spelling errors, I usually like to give people the benefit of the doubt since we all make mistakes. Autocorrect is a thing, and sometimes it is more of a curse than a blessing. But sometimes, the mistakes are egregious. Sometimes you know that the person had no idea how the world was spelled, so they took a stab in the dark, and they accidentally stabbed themselves in the eyes, and then blindly tried to spell a word based on the sound. Sorry, but that is what it seems like.

But apparently, it's not our fault! In 2008, the Times UK investigated bad spellers, and via the Wellcome Trust Center For Human Genetics, discovered that a shocking 60 percent of humans' ability to spell comes down to genetics! In simpler terms, it's your mom and dad's fault.

Professor Monaco says that our genes dictate how our brain develops.

According to the Times UK:

In his study, his lab tracked the development of 6,000 children born in the early 1990s. Previous studies highlighted a particular gene that might affect reading ability, which goes by the rather catchy name of KIAA0319. We all carry it, but he found that 15per cent of the population have a slightly different version than normal. According to Professor Monaco, the normal version of the gene helps to guide brain cells into the cortex, the thinking part of the brain, when a child is developing in the womb. When the gene is different, however, it is unable to properly fulfill its function; brain cells get lost on the journey and end up in the wrong place. “This may disrupt the processing of information," he says.

In the meantime, it's totally okay to giggle at these terrible misspellings.

It might even take you a minute to discern what the person was trying to say. Some of these, I'm ashamed to say, didn't make sense until I read them out loud.

Whether they are trickle treaters or trick-or-treaters, the point is that I didn't get any this Halloween and I was left with all the candy (that part, I'm fine with).

They've been married for 10 years. Have they thought this whole time that they said "vowels" to each other on that day?

Yes, but what specific ocean are you talking about? "Yes." No, what ocean, specifically? "Yes, specifically." Ugh, nevermind.

The thing is that cannibals are very different from cannon balls. Don't get them mixed up.

I think this person is trying to ask if Little Caesar's (the pizza place) closes at eight o'clock, but I think they had a seizure when they wrote this.

I legit had no idea what this person was trying to say the first three times I read it. Super deceiving, indeed!

I like the idea that if you have trouble recognizing words, you have caught some sort of sickness from a lake.

Waste of time, indeed! It's almost like I haven't seen this sort of nonsense since yesterday.

What? Don't you remember that instant Disney classic franchise, Pirates of the Carry Bean? It's about a pirate who has to carry a bean for a long time. Doesn't sound great, but that's Disney movie magic for you.

Basket and Robbins sound like an '80s pop duo, like Hall and Oates or Loggins and Messina. (They meant Baskin Robbins, so they were close!)

I love how this person gave two different spellings. They were close! Maybe if they had a few thousand more chances, they would have gotten it right.

I know what a pamphlet is. Not sure what a pan-flit is, but I'm excited to find out.

This is like some weird combination between "outfit" and "alphabet" and it's making me upset. I don't like it.

There are too many errors in this post to address, so instead, I'm going to give it a grade. It gets an F.

To be fair, "double ganger" is kind of close to "doppelgänger" in look and meaning, so I'm going to give her this one. It's the least terrible one on the list.

She was so non-salon! Didn't get a haircut or anything! Not even a blow dry. Oh wait, you meant nonchalant, didn't you?

No, because of how Larry David's enthusiasm curves to the left and out of the way. Right?

I see people that have no common sense all the time. In fact, I'm looking at a post written by one as I type.

Not only is Achilles wildly misspelled, but it's the wrong "heel!" That's too much.

I guess this sort of look like corn if it was rolled, but it's also not. This person doesn't get it.

Listen, no matter how relaxing you think incest is, it is very illegal and very wrong in all of the ways. Don't do it! Incense, though, that's fine!

In case you are as confused as one half of this conversation, he's trying to say "familiar." It's not quite working out for him though.

The phrase is "beck and call" but I like beacon call! It sounds regal and like you have some kind of light coming out of your head or something.

I think these are far superior terms and we should substitute "felony" and "misdemeanor" with them immediately. Don't get me started on the higher/hire and weather/whether mistakes, though.

Flaming young sounds more horrifying than filet mignon, but it's essentially the same thing. Share this with the worst speller you know!