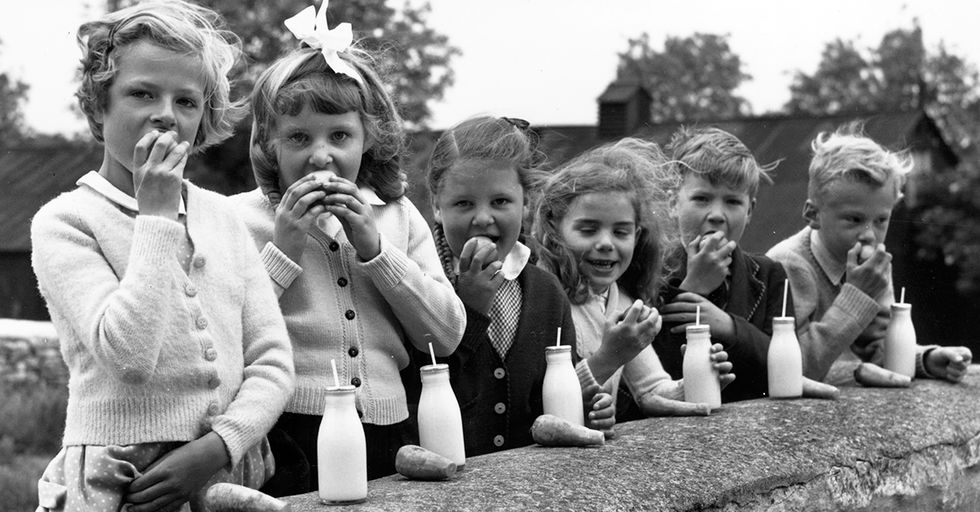 Parenting hacks save lives — that’s just a fact. Because any parent who has ever faced a child who doesn’t want to do something or isn’t cooperating with the way things should be done has thrown their hands up in search of help. Enter helpful tips from experts and other parents to make things go a little easier.

We dug up some of the most ridiculous ideas about parenting from long ago (think Victorian-era advice). And if you’re one of those parents who frequently thinks you have no idea what you’re doing, some of these tips on how to parent your kid — colonic to cure a headache, anyone? — should give you a bit of a confidence boost.

What time should your kid go to bed?

Everyone knows that kids need their rest — but exactly how much rest is that? In Victorian times, English physician P.H Chavasse suggested parents get their kids to bed no later than 5:30 pm — and he expected that they sleep through the night. And while that leaves a ton of extra adult time for mom and dad, that means kids are sleeping more than half the day.

Now: A bit later than

I know people are always looking for parenting hacks to help their kids sleep, but putting them to bed before most people sit down to dinner doesn’t seem right. Since the original report doesn’t specify how old the kids are who are supposed to be in bed by 5:30 pm, we decided to check out the recommended bedtimes for children 3-6. According to Web M.D., 7-9pm is a good guide, with kids needing 10-12 hours of sleep per day. That’s still a lot of sleep, but at least it doesn’t require them to be asleep before the sun goes down.

Should you hold a baby when it’s fussy?

Then: Never pick up your kid

Based on advice from the 1911 edition of A Handbook of Obstetric Nursing, unless parents were feeding a baby, changing a diaper, or providing basic care, the idea of picking up a baby just to hold it was strongly discouraged. In fact, the book called holding a baby "foolishly spoiling" the child and warned against showing affection, like hugs and kisses. The feared result? The kids would grow into "little tyrants."

Of course, it’s not a good idea to pick up a baby every single time it cries. But babies need love and attention, and they don’t just cry for no reason, and this idea that you’re supposed to ignore your child unless you’re doing something the baby needs is ridiculous. Parenting hacks are designed to make life a little easier for the parent and help kids develop quickly — they aren’t designed to ruin your child’s life. So love your baby, pick it up and dote on it often and freely. Studies show that loved kids become independent, free-thinking toddlers… so love on your kids now while you still can!

What color should you decorate the nursery?

Then: Never use green — it might kill your kids

Whether or not you like the color green, the rationale behind not using green sounds rather insane in 2018. According to Chavasse, "do not have your nursery wall covered with green paper-hangings. Green paper-hangings contain large quantities of arsenic — arsenite of copper (Scheele's green ) — which, I need scarcely say, is a virulent poison, and which flies about the room in the form of powder." What’s even more insane. At the time he gave this advice, he was correct. He continues: “There is frequently enough poison on the walls of a room to destroy a whole neighborhood," then adds in a story about a family that lost four babies to arsenic poisoning before figuring out it was the wallpaper killing them.

Green paint is safe, and also… it’s a nice change from the standard blue for boys and pink for girls that society has conditioned new parents to gravitate toward. Girls can like blue and boys can like pink and they can also like green and yellow and red and a bunch of other colors. So rather than force your kids into a box before they’re even old enough to talk, get creative and create the nursery/room that you and (if their older) your kids think is fun.

What do I do if my kid gets a headache?

Then: Give your kid a colonic.

In Los Angeles among adults, colonics are a big thing for health and weight management, but for kids? As a way of stopping headaches? In the early 1900’s, that’s how Drs. William and Lena Saddler (husband and wife doctors who specialized in children) suggested handling headaches and migraines: with a “hot colonic flushing," Their advice? “They should be taken at night just before retiring with the temperature of the water as hot as can be borne. Half of the water is allowed to flow into the colon and is retained as long as possible. This brings the heat in close contact with the sympathetic nervous system whose headquarters is in the abdomen." Sounds… painful. Like worse than a headache.

Now: Something much more subdued

Would you give yourself a colonic if you had a headache? No? Then maybe don’t do it to your kid. Instead, try having the child rest ion a cool, dark room with a cold compress, and if the child is old enough, an over the counter pain reliever might help.

What should I serve my child for lunch?

They say breakfast is the most important meal of the day. What they don’t say is, “and then don’t eat anything again until dinner." Unless it’s Victorian times and you’re physician P.H Chavasse. According to him, if a child wants anything to eat between breakfast and dinner,  "let him have a piece of dry bread; and if he [has] eaten very heartily at dinner, and, like Oliver Twist, ‘asks for more!’ give him, to satisfy his craving, a piece of dry bread." To be fair, not too many people overindulge on dry bread, but still… this seems harsh.

Now: So many things…

Google “best lunches for kids" and literally hundreds of recommendations will come up… from the Food Network to recommendations from doctors and nutritionists. You know what doesn’t come up? “A piece of dry bread" or “nothing until dinner."

How to Get Your Kid to Sleep

Yep, you read that right! In the 1875 “bible" on parenting — The Mother and Her Child — the subject of insomnia in babies comes up often, and one of the wilder suggestions on how to cure the problem of sleeplessness stands out: "Wakefulness is sometimes due to reflex nervous causes such as the need for circumcision." No explanation as to why this might prove helpful is offered.

Now: Pretty much ANYTHING but that

Parenting experts offer tons of reasons why your baby might not be sleeping, and just as many parenting hacks to help get your kid to bed. Some of the more popular ones: Try giving your baby a bath… the warm water will make him sleepy; Be sure you stick to a bedtime routine; Make sure the room is cool and not too stuffy. The list goes on, and you can read all about them here… but what the list does NOT say is anything about circumcision. In fact, experts are debating whether or not circumcision is even good for children. While the American Academy of Pediatrics argues that the benefits of circumcision outweigh the risks, opponents argue that circumcising a child takes away their choice in the matter — plus, it’s not exactly a pain-free procedure.

What should I do with my baby when we go for a walk?

Then: Don’t Use a Stroller

Doctors often advocate the benefits of fresh air for children, but there was a time when certain experts felt that strollers were too constricting and would limit the development of a child. Chavasse used to warn parents against the use of a stroller, writing: “If he be in a perambulator, he is cold and unsupported, looking the very picture of misery, seeking everywhere for test and comfort, and finding none." Instead, he advised, that the only proper way to transport a child while outside was by carrying them.

While it’s true that parking your kids in a stroller all day, every day and depriving them of physical contact and human interaction is no good for any kid, there is no evidence to suggest that the occasional stroller ride will harm your child’s development. The key is to keep it to a minimum and not still rely on the stroller after they’ve clearly outgrown it. “Keeping children in strollers too long can suppress their growing sense of freedom and curiosity," Dr. William Crain, a professor of psychology at New York City College, told The New York Times. So when your kid is ready to explore and walk, let them. But until then? There’s no rule that says you have to have them strapped to your hip at all times.

When should I think about potty training my child?

Then: Force Potty Training with a Stick

Without question, any parent who has ever spent a fair amount of time changing diapers can’t wait for the day their kids start using the toilet. But that doesn’t mean potty training should be forced. In a 1935 U.S. Department of Labor "Infant Care" pamphlet, parents were not only urged to start potty training their kids at two months (when most babies can barely even hold their heads up), it also suggested parents "provoke" a bowel movement "using a soap stick. Try that today and you might wind up defending your methods to child protective services.

According to WebMD, there’s no right age to start potty training your kid, because just like walking and talking, every kid is different. Most kids start showing an interest around 2 or 2 and a half, but even then, you have to ask yourself some questions first. Is your kid old enough to sit on a potty and get back up without help? Can they be counted on to tell you when they have to go? Use your best judgement and just because a kid expresses interest in ditching diapers, that doesn’t mean you have to start the process right then and there.