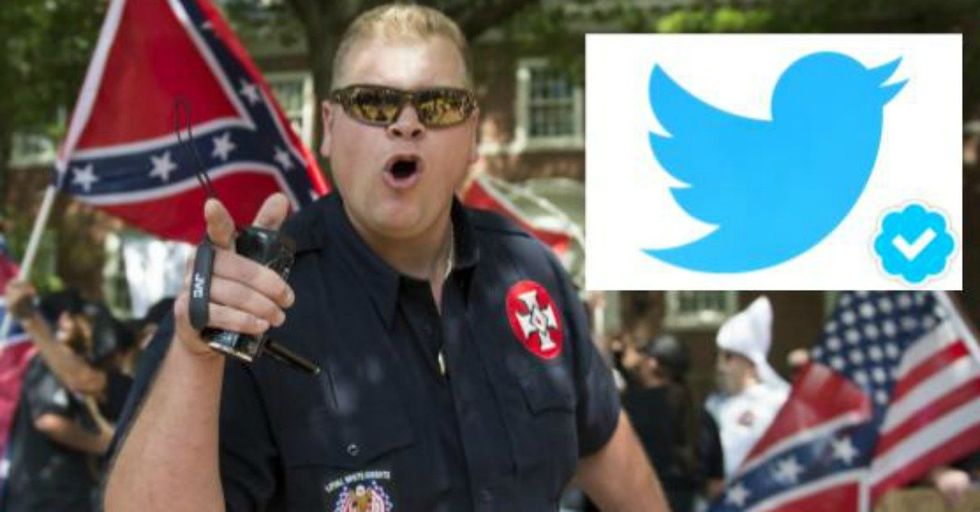 On Tuesday, Twitter gave its famed blue checkmark to white supremacist Jack Kessler. Kessler – the creator behind the incendiary Charlottesville rally that left protestor Heather Heyer dead and had President Trump making such questionable remarks as "very fine people on both sides" – had previously deleted the social media platform after tweeting that Heyer “was a fat, disgusting Communist," whose death was “payback time."

Kessler later blamed the comments on a mixture of alcohol and prescription meds, but most people don't magically turn into sexist, racist trolls when they drink or take medication or a combination of both.

Kessler's verification came less than a month after Twitter CEO Jack Dorsey tweeted that the company would make a greater effort to protect inclusivity and ban hate speech on the social media platform.

Dorsey tweeted "We (have) decided to take a more aggressive stance in our rules and how we enforce them. New rules around: unwanted sexual advances, non-consensual nudity, hate symbols, violent groups, and tweets that glorifies violence."

He made this statement one day after Twitter suspended actress Rose McGowan from the platform for tweeting that Harvey Weinstein had raped her.

McGowan was allegedly suspended because she had tweeted a number, but users protested the company's uneven enforcement of its harassment policy, citing Twitter's complicated history of punishing victims while giving their abusers a platform and microphone, as in the case of Leslie Jones, who was hounded off the platform by Milo Yiannopoulis' troll army.

When users cried foul about Kessler's verification, Twitter replied with a tweet explaining that its checkmark was not an endorsement.

Twitter support tweeted, "Verification was meant to authenticate identity & voice but it is interpreted as an endorsement or an indicator of importance. We recognize that we have created this confusion and need to resolve it. We have paused all general verifications while we work and will report back soon."

Twitter may not see its verification as an endorsement, but the fact remains the blue checkmark gives its bearers an amplified platform. In fact, Kessler wasted no time in going after McGowan once he had his.

In one of his first tweets, Kessler posted a picture of McGowan in her infamous VMA's dress with the caption, "#1 Fuck Harvey Weinstein and all but #2 Shouldn't Rose McGowan be held accountable for being a thot that will do anything for attention?"

Less than two days after Twitter verified Kessler, the ensuing brouhaha has forced it to stop its verification process.

Ed Ho, general manager of Twitter's consumer products and engineering group explained the company's thought process with a tweet. "We should have stopped the current process at the beginning of the year. We knew it was busted as people confuse ID verification with endorsement. Have to fix the system, pausing until we do." Well, it's definitely a start.